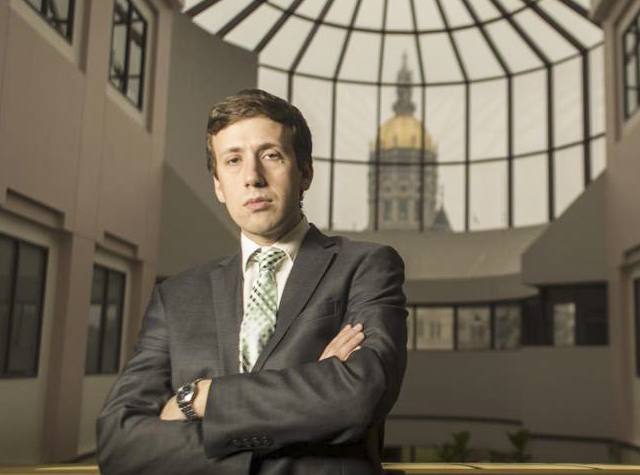 Former Wesleyan student Matt Lesser dove headfirst into politics before most of his peers even decided their major. A lifelong proponent of progressive policies and Middletown’s State Representative for the last 10 years, Lesser has always worked to make young voices heard, and to help college students recognize the political power they have—which only makes sense, given that his political career began while he was still on campus.

“While I was at Wesleyan, I got involved registering students to vote,” Lesser said. “I got randomly elected president of the College Democrats of Connecticut, and ran a statewide voter registration drive. That made the difference in at least one congressional race, one that was really swung by the votes of college students. That really woke me up to the political power that college students have.”

Lesser’s registration drive led to a 700 percent increased voter turnout for college students at the University of Connecticut, and drew the attention of local and state politicians.

“The next year, I was recruited to run for a local office in Middletown—the Chairman of the Zoning Commission,” he began. “I did that in Middletown and I loved it. And after that, I ran for State Representative. I ran against a Republican incumbent and I beat him. With, of course, the help of a whole bunch of Wesleyan students—my campaign manager was actually head of the WSA.”

Now in the midst of a campaign for Connecticut’s state Senate, Lesser hopes to continue to receive support from Wesleyan students—support that he says he needs in order to secure a progressive future for the people in this state.

“Control of the state Senate runs right through Wesleyan; there’s an 18-18 divide between Democrats and Republicans right now,” Lesser said, noting that Wesleyan and Middletown make up a portion of his potential Senate district. “There’s a huge fight for this seat, and whoever wins it will control the state Senate. So if students vote, there will be a progressive majority. And if students don’t, there will be a Republican majority.”

But Lesser’s argument doesn’t just come down to the numbers. He plans to continue a trend of making real change that he began ten years ago as a state Representative, translating progressive energy into increased protections and expanded rights for those who live in Connecticut. One of his proudest accomplishments is a first-in-the-nation program protecting students.

“I’m something of a national leader on the fight for student loan reform,” he told The Argus. “I passed something called the Student Loan Bill of Rights, regulating the student loan industry. It’s being copied nationally. That’s why I got Betsy Devos’ attention.”

Lesser is referring to the overwhelming amount of money pouring in against him in this race. He estimates about $55,000 in the span of one week in things like attack ads, mailers, and digital media. A Betsy Devos-supported Super PAC is responsible for a lot that funding.

Lesser is battling the Trump Administration on more than just student loan protections.

“I’ve also stood on the front lines against Donald Trump’s immigration policy,” he said. “Francisco [Acosta], who is a Wesleyan custodian, was being threatened with deportation—I stood with him on the steps of the Hartford courthouse, and went with him to the ICE office to make sure he was okay. We were able to avoid deportation, so a guy who escaped with his life from Colombia can still be a part of the Wesleyan community.”

Lesser’s strategy of fighting through the opposition rests on stories just like that—stories of the people in his community. He sees this campaign as a test of the power of people versus the power of out-of-state money.

“We’re gonna register a lot of people to vote,” Lesser said. “We’re gonna talk to people face to face. We’re running a grassroots campaign. I’m going to be outspent, and I’m okay with that. What they’re not gonna be able to do is match the boots on the ground. Because I know Betsy Devos is not coming to Wesleyan, and she can write as many checks as she wants, but this is about people.”

All that national funding lends evidence to the idea that state offices matter more than a lot of people believe, and Lesser thinks this is the time for progressives to recognize the importance of these smaller-scale races.

“I think progressives make this horrible mistake, where we think the state legislatures are the minor leagues, and the B-team,” he said. “We think that the real action is in Congress. But actually, we have it completely backwards. Nothing is happening in Congress. The real action is in the states. States passed restrictions on a woman’s right to choose, they passed stand your ground laws, states have passed these horrible immigration laws. But states can also be progressive bastions. I voted on same-sex marriage years before it came up nationally. We were the first state in the country to vote on paid sick leave as a right for workers. If you’re a progressive and you care about getting things done, you should focus on the states.”

“Local matters,” he stated simply. “Whether you like it or not, you are a resident of Middletown, Connecticut for four years, and what happens in Connecticut is incredibly important. We have the opportunity as a small progressive state to move progressive policies forward that can’t happen on the national level until Trump is out of office. So what happens in a small state has national importance.”

“I think states can really lead on healthcare, on making healthcare available to everybody,” Lesser continued. “I think we can lead on paid family medical leave, on raising the minimum wage to 15 dollars an hour. We can lead on college affordability—we can really make a down payment on free college, which would have a transformative impact on the economy. We have entire generations that are saddled with debt, and I see that as a huge problem for the country.”

In order to implement this vision, Lesser needs votes, and especially the votes of young college students. He says that’s why he’s worked to expand voting rights and accessibility in the state—from moving the Middletown poll station onto Wesleyan’s campus to strengthening laws against voter intimidation.

“Basically, right now, you have no excuse,” he said, laughing. “If you want to vote, you can. We made it about as easy as we can. I think democracy is better when more people vote, and that includes students.”

Lesser offered a bit of advice to students who, like him, want to get an early start in politics.

“Get your hands dirty,” he said. “Pay attention to places. It’s very easy to just set your sights on DC, but like I said, the real interesting work is happening in the states. So whether it’s Middletown, Connecticut, or wherever you’re from, get involved. There are immense opportunities at the state and local level.”

Asked what he would like to leave students thinking about, Lesser once again stressed the importance of making voices heard on the state level.

“What happens in Connecticut really depends on what happens in Middletown,” Lesser said, driving the point home. “This seat matters. You have a choice of whether you want to sit this one out, or elect a flaming progressive state senator, or a conservative Trump-style republican. That’s the choice that Wesleyan has. My hope is that they’ll join with me, and elect one of their own to the senate.”