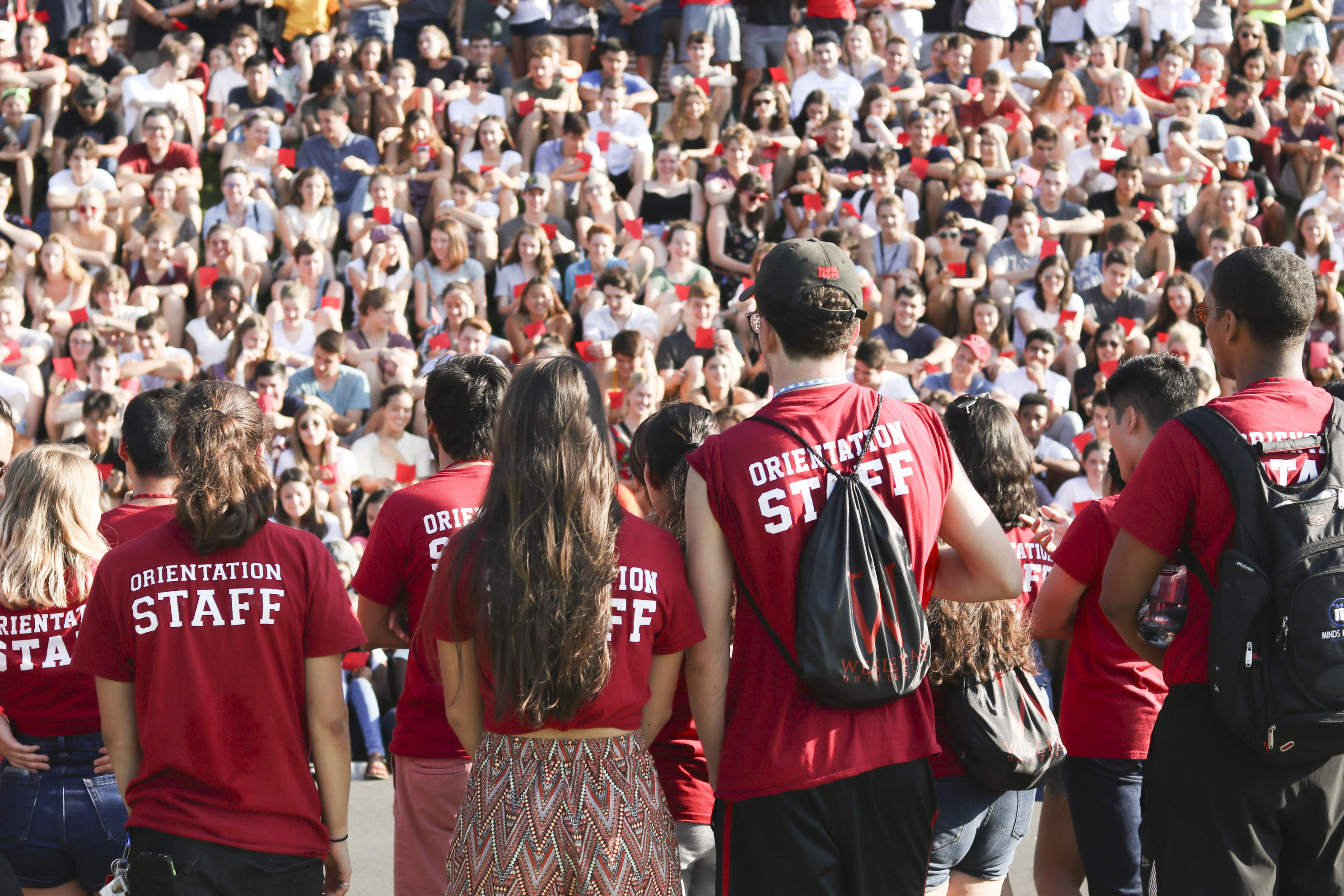 The drowsy days of summer were truly left behind some time around 9 a.m. on Wednesday, Aug. 29, when campus seemed to come to life. Cars lined every road and driveway, even Andrus Field, pulling up one by one to deliver boxes upon boxes while sweaty parents milled around and new students chatted excitedly. Though international students, athletes, and First Things First students had been on campus for a few days in advance, for most students, this was it. The beginning of first-year orientation.

When you think about it, first-year orientation as a concept is as terrifying as it is confusing. You are confronted with a large group of people that you have never met before, and expected to go through a variety of seemingly-random activities together, all so that you can ‘make new friends’ and ‘have new experiences.’

First years said that these were basically their expectations going in.

“I guess I kind of thought that there would be a lot of times where they were trying to get you to make friends, a lot of social opportunities,” Ben Rubel ’22 said. “I also thought there would be tours showing you where everything is and how to do it.”

Shayna Dollinger ’22 got right to the point.

“I heard it was gonna be like summer camp,” she said.

Once orientation was underway, though, there was not much spare time for preconceived notions of what it might be. Between meals, presentations, discussions, performances, and nighttime activities, first years were busy with events all day long.

This lack of free time posed a problem for Rubel.

“One thing was that I wanted some Wesleyan notebooks, so I only bought one regular notebook, but then I never had time to buy more notebooks until yesterday,” he said. “So that was no good.”

Indeed, the busy schedule stopped for no one. Some of the events made more of an impression than others. That said, most freshmen found ‘In the Company of Others’ particularly inspiring. This performance featured speeches from five different upperclassmen who shared raw, emotional stories of their personal struggles and experiences.

“In the Company of Others was pretty impactful for me, because it helped me know that people do struggle at Wes, and they vocalized that,” Brian Kim ’22 said. “It kind of threw away that facade that everything is gonna be fine, but it also gave me hope that within those hardships, I’ll find a lot to learn.”

As an international student, Tomoshi Ishida ’22 said that some of these ideas and discussions were very new to him, and important learning experiences.

“Because I’m from Japan, I’ve never discussed some of these heavy topics before,” Ishida said. “When I came to Wesleyan I came to be aware of these topics. I feel like I want to be careful of other people’s feelings, and worries.”

Orientation leaders also spoke to the importance of having intense discussions with hallmates, even early on in students’ college experience. In fact, they said that becoming closer with the people you live with is one of the main purposes of orientation.

“I think that the best part [of orientation] is just learning about the people you’re going to live with,” Orientation Leader Aliya Shecter ’20 said. “Because who you live with freshman year is a really big part of your first Wes experience. I think that if we didn’t have orientation, there wouldn’t be so much of a community.”

Later on, after a jam-packed day with all kinds of performances and discussions, freshmen were treated to fun activities such as a karaoke night, a square dance, and an open-mic.

Caroline Parker ’22 said that the square dance ended up being one of the best parts of orientation for her.

“That night was fun because you could easily talk to people,” Parker said. “You could just do-si-do with randoms, so that was kind of cool. I always ended up with one of my hallmates and we talked, so now we’re friends. It was kind of weird but it worked.”

The concept of “kind of weird but it worked” turned out to be something of a prevailing theme for freshmen as they progressed through the phases of orientation. More presentations, more discussions, more awkward dining hall encounters. The pinnacle of it all was Friday night’s Common Moment.

As a mandatory event, the Common Moment brought the entire freshman class as well as Orientation Leaders to Foss Hill. Students were subsequently broken up into four massive groups, and given instructions on what to do. Ultimately, the dance involved assuming a position, keeping your eyes open, and holding still for as long as possible until movement was absolutely necessary. Only then could you close your eyes briefly to slowly and painstakingly adjust your positioning.

Spectators and other students were encouraged to walk around the group of performers, to take pictures, or even inspect them closely. It was as much an exercise in stillness as it was in patience.

As you might have guessed, it received mixed reviews.

Orientation Leader Sarah Shehreen ’21 pointed out that the purpose of the activity was to spark some level of discomfort.

“I think the point of the whole thing was to put you in the spotlight, and put you in that uncomfortable situation,” she said.

Leaders and first-years alike agreed that though it was clear the Common Moment was somehow related to First Year Matters author’s (Professor of English and Feminist, Gender, and Sexuality Studies Christina Crosby) memoir and speech, and the concept of able-bodiedness. However, the connection was a little hazy.

And of course, freshmen had other complaints about orientation. Some felt too scheduled, while others would have liked less free time. Some hated all the discussions, while others felt that these were the times in which they really bonded with their classmates. Some just hated all of it. However, most agreed that they had learned something from the process.

Whatever you took out of orientation, whether positive or negative, at least you now have a couple of familiar faces to wave to as you walk around campus. And hopefully some time to pick up a few more notebooks.