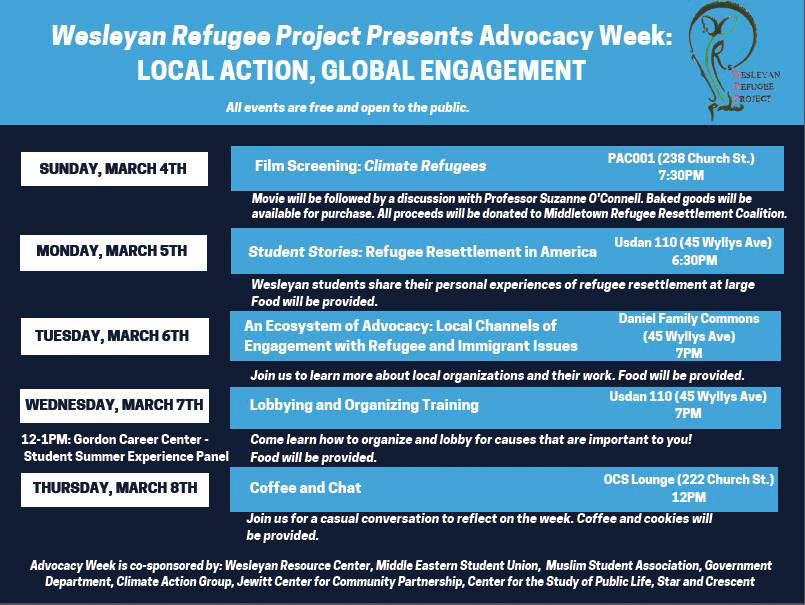 The Wesleyan Refugee Project (WRP) is hosting a weeklong series of events titled “Advocacy Week: Local Action, Global Engagement” to both engage the student body with the issue and build connections with local activists.

Advocacy week kicked off with a film screening of “Climate Refugees” on Sunday. The WRP will hold daily events until a final “Coffee & Chat” conversation, which will conclude the week on Thursday, March 8.

The series of events comes as a collaborative project among the WRP, numerous student groups on campus, and University programs like the Allbritton Center for the Study of Public Life and the Center for the Americas. The mission of the week is to provide a venue for faculty, students, and those from the surrounding community to collaborate on refugee-related issues.

“It’s [about] having a platform for these different groups and approaching this work from different angles to meet and combine their efforts,” said WRP President Caroline Kravitz ’19.

The week’s collaborative mission is seen in the diversity of its events, from a lobbying training session on March 8 to a student-based, personal story session on refugee resettlement in America on March 6.

“We’re trying to give people a variety of ways to approach this issue,” Kravitz said.

The week is also part of an effort by the WRP to increase engagement between student and community activists, featuring many local actors in immigration and refugee issues as speakers. Wednesday’s event showcases an immigrant rights lawyer from Middletown, Meghann LaFountain, as well as representatives of the Middlesex Immigrant Rights Alliance and the Middletown Refugee Resettlement Coalition.

“We’re trying to facilitate conversations between Wesleyan students, Wesleyan faculty, and also the surrounding community through providing the place for people to meet and discuss these things,” Kravitz said. “They can forge connections to help each other with the work they’re doing.”

Mason Mandell can be reached at mjmandell@wesleyan.edu and on Twitter @MasonMandell.