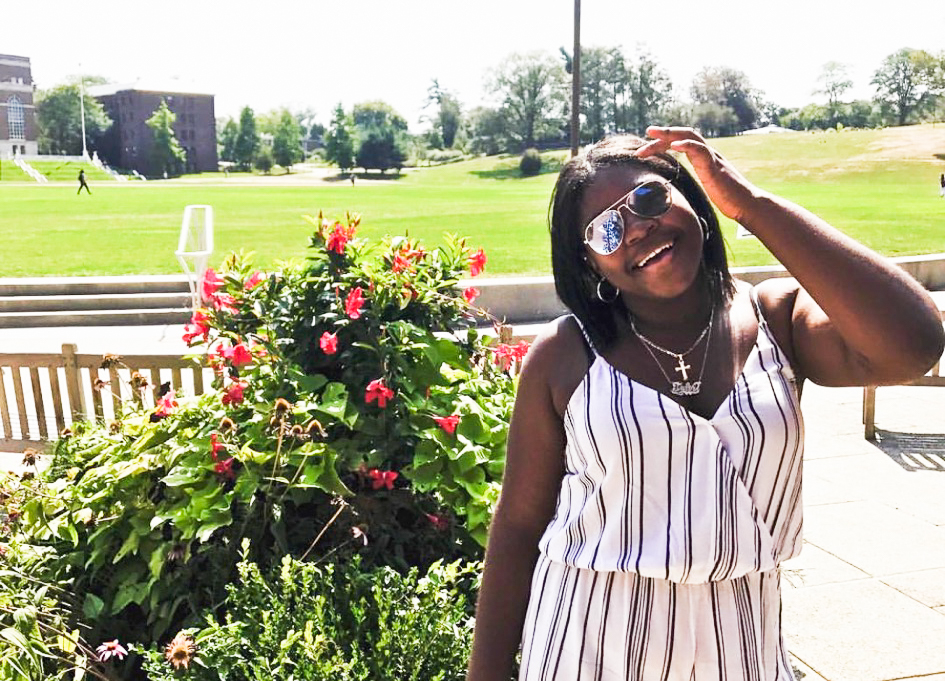 While she might not admit it, Tyler Clarke ’18 is one of Wesleyan’s most prominent socialites. You might know her as director of X-tacy. Or maybe you know her from her involvement with Psi U. Or perhaps you know her as a senior interviewer. But you probably don’t know her feelings about “Daddy” John Finn, her take on finessing the system, or, most importantly, her WesCam priorities.

Tyler Clarke: Hmm…I don’t know. I like people a lot. I like getting to know the different communities on campus and just not really siloing myself to one area. So, just getting to know most of Wesleyan could have been why I was nominated.

TC: No! I wouldn’t say that at all, I just genuinely think that people have different things to offer…

(Eavesdropping on the interview, Austin Dhillon ’18 mutters, “She’s such a socialite.” All others listening in on the conversation unanimously agree.)

TC: It’s just nice to get to know people, despite whether or not they’re a part of your normal social circle or who you would normally hang out with.

A:  So, besides clearly being a socialite, do you think there are things you’ve been involved with on campus that have made you more of a notable presence?

TC: Probably dancing, that’s something I came in doing immediately freshman year, so being able to get into that community and performing within the first two months of school was probably helpful in getting to know people.

A:  Can you talk more about your involvement with dance?

TC: Yeah! So, I was a part of four dance groups my freshman year: WesShuffle, Kalalu, Fusion, and X-tacy, but then I had to drop two of them because it was just too much of a time commitment. Now I’m currently the director of X-tacy and a part of Kalalu and I love it! I’m still challenging myself as a dancer, but also meeting so many new dancers. It’s really fun to do something I love on a collegiate level and it’s probably one of the last times I’ll be able to dance this seriously and perform.

A:  Very cool, so is there anything else that you’ve been involved with on campus that you’ve really loved?

TC: Well, WesBurlesque, but that’s dance related. Psi U is pretty cute, I think. It’s something I didn’t imagine myself doing at all. Then, I did it my sophomore spring and met so many new people, like all these random LA bros or film people who I never would have connected myself with. Ben Velaise [’18], for example, is one of my best friends today and I definitely attribute that to Psi U.

A: If you woke up tomorrow as a freshman in Bennett again, knowing what you know now, would you go about your next three years the same as you have? Would you change anything?

TC: I think I would take more risks. I feel like I played it pretty safe. In general, each year I was trying to make sure I wasn’t doing anything too ridiculous, but none of that matters. And as a freshman, you come in so hot and you’re worried about everything, but it’s not that deep. No one is really paying attention to you. Even now, still no one is paying attention to you, so don’t be afraid to be ridiculous.

A: Are there any clubs or classes you wish you had taken/gotten involved in your time at Wes?

TC: Yeah, maybe Econ because I have no idea about Econ in any realm. Oh, and math classes! I came in thinking I was a math major, but after taking Calc I, I didn’t want to continue, but I still love math to this day.

A:  On the flip side, have there been any classes or professors that you’ve had that you’ve loved?

TC: [Professor of Government, Emeritus] “Daddy” John Finn…was one of the only professors to teach law classes. I took The Judicial Process with him and we spoke about the First Amendment and the Bill of Rights. The class solidified my decision to go to law school. I’m not sure if I want to practice law necessarily, but that class made me interested in at least studying the law more. I loved every second of that class and was fully engaged the whole time.

A: What’s the biggest change you’ve seen at Wesleyan over your time here?

TC: I think socially, and maybe it’s just me because I’m involved in Greek Life, but the notion around Greek Life is so different than when I was a freshman. I feel like it was so shunned, especially given the time period when I was a freshman, but I feel like now everyone, including seniors, are much more interested in rushing. And maybe senior year is different, but I feel like there are no silos of environments. The lax team that lives next to me I’m genuinely good friends with and freshman year I didn’t know them at all.

A: Are there any Wesleyan secrets/tokens of knowledge that you can impart on us now that you’re leaving soon?

TC: Hmmm…always take the elevator up to Usdan, don’t walk up the stairs. Steal from Weshop whenever you can because it’s a cartel. Really, you can do anything if you just pretend that you should be doing it. And always finesse the system. That being said, I do work for admissions so…

A:  Speaking of admissions, how did you get involved working there?

TC: I applied as overnight hosting coordinator the summer before my freshman year, which I actually didn’t get initially. Ethan Savel [’18] had it but ended up quitting, so I was next in line. That’s how Ethan and I became friends. I stayed doing overnight hosting for two years, then I went to front desk when I got back from [study] abroad and now I’m a senior interviewer! And I’ll be reading applications for the class of 2022.

A:  How has it been being a senior interviewer?

TC: It’s been so great. I genuinely like meeting the students who are applying, they have so much to offer in the span of 25 minutes. It’s so cool to see how much they’ve already done at like 17/18 years of age. I was not that phenomenal at that age, so it’s humbling.

A: What have you gained from your experience at Wesleyan that will stick with you in the future?

TC: Over the last four years, Wesleyan has definitely given me a better sense of self and confidence. I’m so much more solidified in who I am than when I started at Wes. I’m no longer trying to compete with other people, but just actively trying to better myself. I think that’s advice I would give to people just starting at Wes, like don’t be so stressed about being perfect, just do you. Don’t underestimate yourself just because you feel like there’s people in a class or around you who are better at something than you. Stop stressing.

A:  So, last question is a little tougher, but who’s going to be the first person that you WesCam?

TC: Omg, that’s an important question. Hmm…Okay, so I’m not going to say it on the record, but I will say, his initials are E.C.