‘Fuck Your Ivy League Sweater’: Diet Cig Does Not Disappoint at Alpha Delt 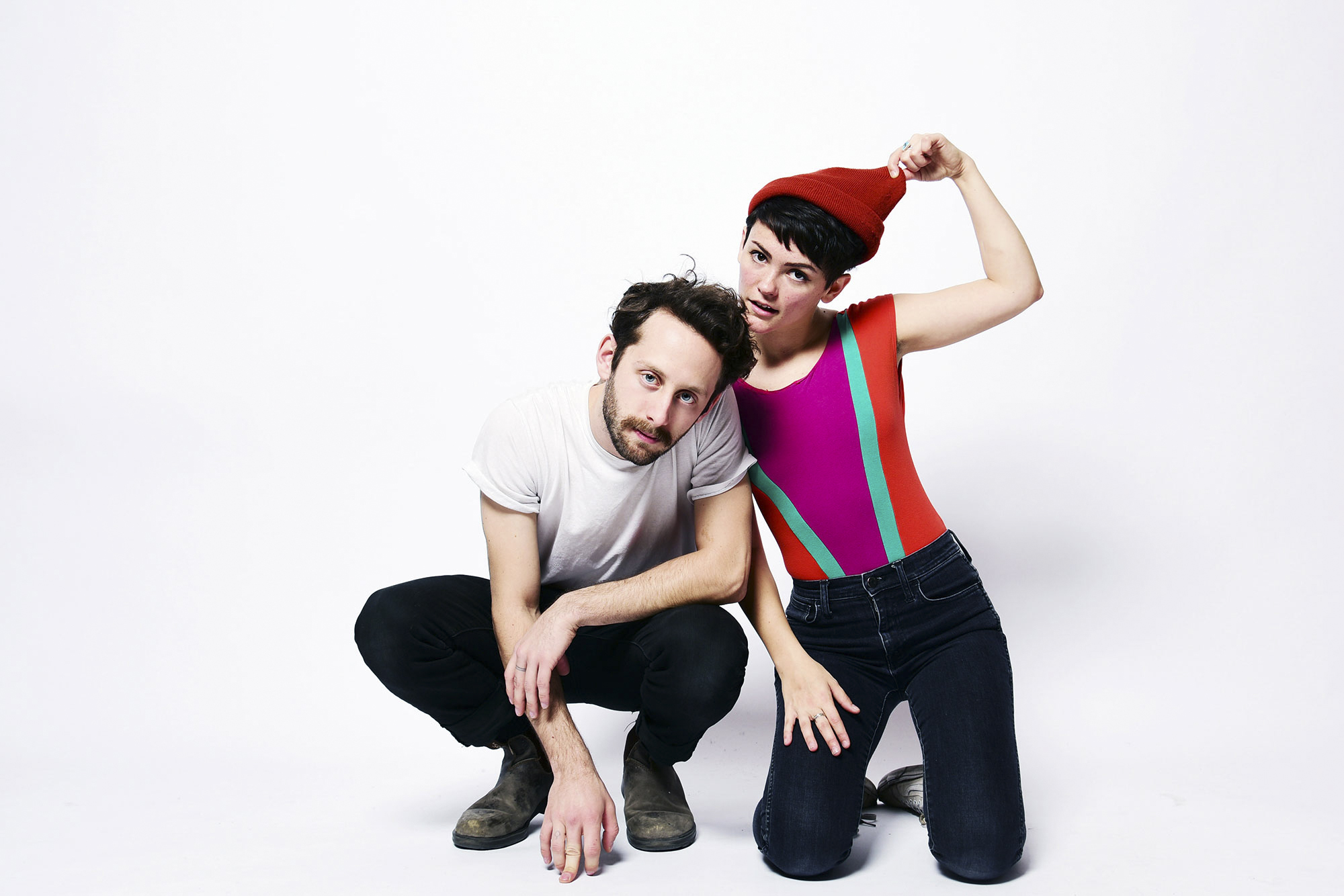 “This next song is good for making out with your partner or lover or friend. Consensually!”

The New York-based duo Diet Cig, composed of Alex Luciano on vocals and guitar and Noah Bowman on drums, came to campus on Saturday, Nov. 11 to rock out for an audience of students in the Alpha Delta Phi living room. The band’s music captures something of the college angst surrounding self-doubt and love, with simple and affecting lyrics and a hype, unapologetic sound. Their Alpha Delt performance was youthful and glittery, with Luciano’s vocals bending like guitar strings and Bowman’s drums hammering along.

Luciano met Bowman when he was performing with his then-band Earl Boykins in 2014. She approached him asking for a light and the two hit it off. Their first EP, Over Easy, came out in February of 2015 and in 2017, their first album, Swear I’m Good at This, was released. Diet Cig has been touring since.

Wesleyan student band Flaccid Ashbacks opened the show with a properly punk tone, featuring covers of songs like P!nk’s “So What” and The Beatles’ “I Saw Her Standing There,” as well as original tracks from their debut album, Try the Soup. The living room dance floor swelled as students flooded in, enjoying the opener and preparing for the headliner.

As soon as they walked on stage, the band members of Diet Cig set an attitude that was at once electric and casual. Before taking over center stage with her bouncy energy, Luciano deftly removed her striped undershirt from underneath her white tee. Bowman, for his part, placed a rubber ducky on a metal rod next to his drum set. A duck for luck? We think it worked.

After receiving a warm welcome from the audience, Luciano gave a brief speech directed toward the femme and nonbinary audience members and the importance of listening to rock. This struck a chord with die-hard fan Chloe Thorburn ’20, who noted how important this was for her experience of the concert.

“She was very positive towards femme people and nonbinary people and she was very encouraging of us being there,” Thorburn said. “She kept being like ‘I love that you guys are taking up all this space!’”

The band then opened with hits off Swear I’m Good At This, ranging from hardcore basement punk songs like “Link in Bio” and “Bite Back” to the make-out songs (see: intro) like “Apricots” or “Bath Bomb.” While the Alpha Delt venue worked to amplify Diet Cig’s classic college band sound, these slower songs, which Luciano plays with the acoustic guitar on the album, had a provocatively different sound when performed live on a grumbly electric.

Fans were continually chanting for the duo to play the album’s no. 1 hit “Sixteen,” which features your reporters’ all-time favorite lyrics:

The liveliness and hilarity of the lyrics were all the more palpable in a live setting, and audience members (including your reporters) were thrilled and chanted along.

The band’s final song was, of course, “Harvard,” their all-time greatest hit, which portrays an ex-girlfriend ragging on her past boyfriend’s new fling with a college girl. There was no choice but to sing along with Luciano: “Does it feel better / To be in an Ivy League sweater?”

Do Wesleyan students, as members of one of the Little Three, derive extra satisfaction from the song’s spiting of America’s most exclusive universities? The question remains.

“Fuck your Ivy League sweater / You know I was better.”

In terms of stage presence, Luciano was not shy of jumping and bounding around the stage during the performance. She jumped on and off Bowman’s bass drum repeatedly and showed off her signature leg kick, her cheeky smile never leaving her face. This excited movement contrasted Bowman’s; for the most part, he remained out of the spotlight, steadily focusing on getting the drum tracks just right and backing up his singer.

Regardless of their different stage movements, both band members seemed to thoroughly enjoy performing. Between songs, Luciano would engage the audience in a conversational and light tone while Bowman, in turn, supplemented her words with the occasional laugh and consistent smile. Luciano, at one point toward the end of the concert, jumped with a giggle into the arms of a couple of audience members in the front row.

One of the more remarkable aspects of the concert was the personable vibe emanating from both members of Diet Cig. This was clear from the frequent smiles and the conversational tone of the music and interludes.

“I workshopped a bunch of jokes for you guys today,” Luciano said in between songs. Then, with a laugh: “I don’t think I’m gonna tell any of them.”

After the concert had ended, the chords of the final song still ringing in audience members’ ears, Bowman and Luciano began packing up the stage, both offering hugs and handshakes to any remaining students who came to speak to them. When Thorburn approached Luciano to compliment the performance, for example, Luciano responded with an enthusiastic: “Thank you. I love your eyeliner!”

“I was thrilled to hear that,”  Thorburn said after the show. “I had put on special blue eyeliner—it was the night for some fun eyeliner—and I’m so glad she noticed!”

The duo invited fans to catch them on Fountain after the show.

Andrew Fleming can be reached at apfleming@wesleyan.edu. He cannot be reached on Twitter.