The Good Place Returns from a Shocking Season One Finale Twist 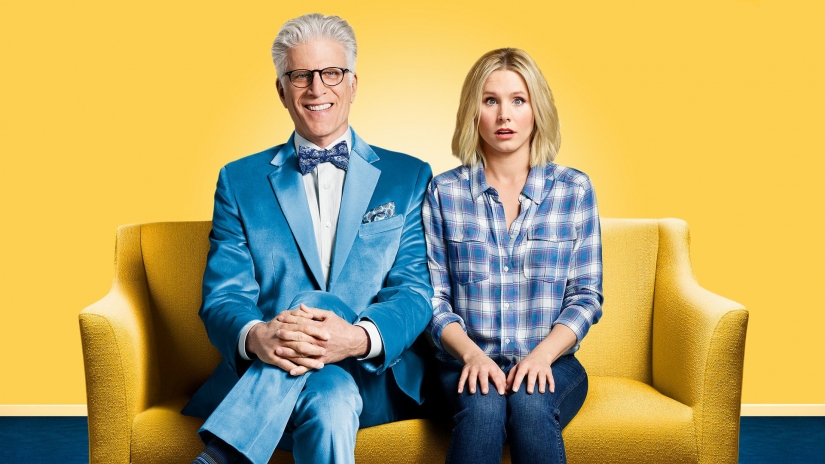 This article contains spoilers for the first season of “The Good Place.”

Few things were as delightful in the clusterfuck of the year that was 2016 as the premiere of “The Good Place” in September. From the brain of Mike Schur, creator of juggernauts such as “The Office,” “Parks and Recreation,” and “Brooklyn Nine-Nine,” “The Good Place” rises to challenge the quality of its impressive predecessors, keeping up its fantastic quality in its second season.

It shares several of the same traits as the rest of Schur’s work, with the location being just as important as the characters. “The Good Place” takes place in the afterlife, specifically the afterlife for the people who were exceptionally good in their time on earth. Meanwhile, those who did not meet this high standard are being tortured in the aptly-named “Bad Place.” Where you end up is determined by a precise point system that awards or penalizes the recently deceased based on everything they did while they were alive. This system leads to several hilarious sight gags, whereby each character’s good and bad actions are mapped out on the screen with text. The actions that merit points range from “end slavery” (814292.09 points) to “maintain composure in line at water park in Houston” (61.14 points), and the actions that result in points being lost include things like “use the term bro-code” (-8.20 points) or “steal copper wiring from a decommissioned military base” (-16.00 points). Those with very high point values earn their place in the Good Place, an idyllic neighborhood with all the frozen yogurt you could want and a ban on swearing. (I know! What the fork?!)

That is, except for Eleanor Shellstrop (played with snarky aplomb by the great Kristen Bell), who is admitted to the Good Place by accident. Despite what eternal being/Good Place guide Michael (portrayed with flustered glee by comedy legend Ted Danson) thinks, Eleanor was not a death row attorney in life; she was a prickly loner who was also a selfish asshole. Eleanor confesses her secret to the man assigned to be her soulmate, the easily flummoxed ethics professor Chidi Anagonye (William Jackson Harper, who plays a fabulous straight man as one of the zanier aspects of the show), sending him into an ethical tailspin about keeping her secret. The other characters running around in the Good Place are Tahani Al-Jamil (the towering and hilarious Jameela Jamil), a philanthropist who has a habit of name-dropping her friends Taylor, Kanye, and Beyoncé; the DJ-turned-silent monk Jason/Jianyu (Manny Jacinto), who has more in common with Eleanor than is immediately apparent; and Janet (played with matter-of-fact energy by D’Arcy Carden), the perpetually chipper information database containing all the knowledge in the universe.

While the main conflict in the show is Eleanor’s secret, “The Good Place” is one of the most plot-focused comedies I’ve ever seen. The narrative moves quickly, propelled by great jokes. It should be no surprise that Schur has stated that one of his biggest influences was “Lost”—the drama’s influence is apparent in the use of frequent flashbacks to show the viewers how the characters lived on earth, which provides laughs and useful character development. Also, almost every episode ends with a game-changing twist, without ever sacrificing the jokes.

The season one finale dropped one motherforker of a twist on unsuspecting viewers, revealing that Eleanor, Chidi, Tahani, and Jason were not in the Good Place; they never were. They were in the Bad Place the whole time, run by torture-entrepreneur Michael, whose reveal is a peak Ted Danson performance, complete with a terrifyingly maniacal laugh. Michael explains that he decided run-of-the-mill torture wasn’t good enough anymore and designed a hell that would allow the characters to torture each other for eternity. It’s the kind of twist that seems to come out of nowhere but makes perfect sense when you re-watch the series. All the little things that seemed to be plot holes (why are there so many mistakes in heaven?) were all just to set up the reveal. It’s effortless plotting and frankly exhilarating television.

Once Eleanor figures out their true location, Michael erases their memories to start his little experiment with psychological torment all over again. Season two begins with Michael’s second attempt. Going into the season, I was worried that it would be too much of a re-tread of the first season, with Eleanor trying to keep her secret and her confidante struggling with the moral dilemma of whether to tell. Based on the two-part season premiere, my fears have been unfounded. “The Good Place” avoids this by adding more of Michael’s behind-the-scenes perspective and that of his employees (minions from the Bad Place masquerading as fellow Good Place residents). By revealing Michael’s true intentions, the new season is different enough from the previous one without sacrificing the feel of the show. Season two also adds a wrinkle that Michael’s literal boss from hell (king of deadpan Marc Evan Jackson) is unimpressed with Michael’s pet project and ready to destroy him if things go south, which sufficiently ups the stakes for Michael and the rest of our characters. “The Good Place” is set to balance its humor and plot in one of the most successful high-concept sitcoms in recent history.