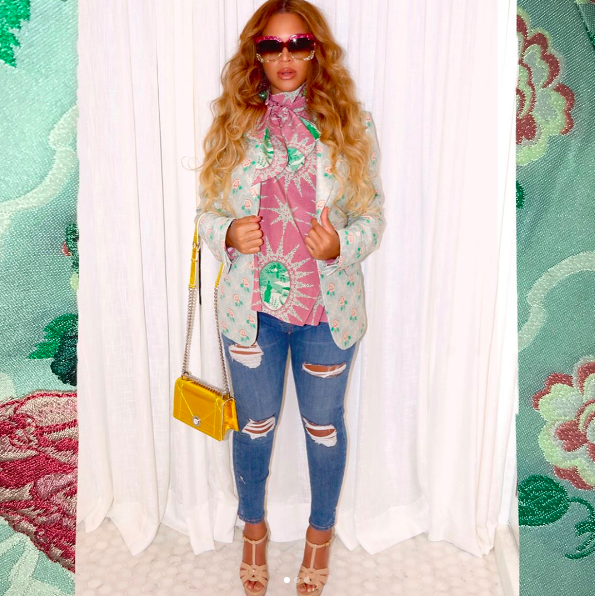 Beyoncé has kept a low profile ever since her stunning Grammy performance this past February. After announcing that she would not perform in Coachella this year due to safety concerns, she has kept her starved fans alive with a string of Instagram photos.

The most recent dose came out this Sunday with the mother-to-be flashing her brilliant Cinco de Mayo outfits from her dinner at the appropriately chosen restaurant, Gracias Madre, this past Friday in Los Angeles. The 35-year-old—pregnant with twins—wore a loose pink shirt with tropical green designs, a casual patterned blazer, and tight torn jeans. Her accessories included a pair of daring high heels, sunglasses, and a little maraca. Also, she and her friend, Kelly Rowland—her former Destiny’s Child bandmate—donned matching sombreros.

These latest photos have, in short, continued to show how Beyoncé is reaching a new echelon of maternity fashion.

Also notable from her recent Instagram string are Beyoncé’s two photos in a “preggers” t-shirt. In both, she looks natural and casual, showing off some stylish braids. One even features her denim jacket and sparkling white skater shoes. Of course, the photos prompted a surge of “preggers” t-shirt sales through the nation.

Scrolling further down Queen B’s Instagram, she shows off her baby bump with a see-through black shirt. One must take a second here to note her gorgeous black blazer with floral vines warping their way up her sleeves. Her accessories include a series of white and silver necklaces and a surreal purse with shining teal and gleaming bronze.

The twin-mama-t0-B also posted a couple photos of her at her mother, Tina Knowles Lawson’s, inaugural Wearable Art Gala in Los Angeles, where she was spotted with Rowland again. (The two were also seen together during Easter festivities with Lawson.) In addition to the slick formfitting dress, she wore a glorious headdress, full of twigs and flowers, like a nest.

One piece of media that strikes against the grain is a video beginning with the album image of Lemonade and a series of flitting pictures. With this, the artist proves she will stay productive even while caring for Blue Ivy and her impending twins.

Every one of these pictures has received millions of views across the world. Many have sought out deeper meaning in these recent pictures, especially the one below: 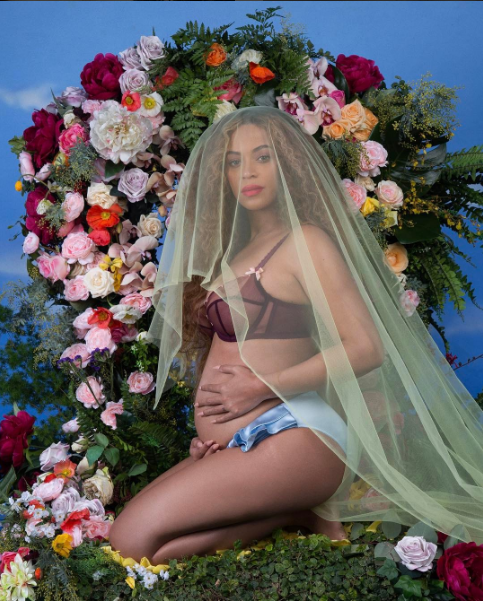 Analyses of this record-breaking image have ranged from speculation about the incoming children’s sexes, connections to the rococo style and Flemish painting in the 15th century, and, simply, “perfection.” Others have gone so far as to suggest influences of the legendary Illuminati and this portrayal of Beyoncé as a figure of Elizabethan importance. But, perhaps the real significance of these stripped-bare images is to show that the pregnancy is, in fact, real.

Beyoncé’s Gram gallery has also made use of numerous slideshows. All of these have been mesmerizing. The Queen has, essentially, taken Instagram to new artistic highs.