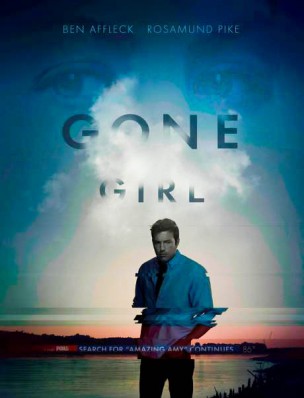 The film website The Dissolve recently published a feature about relationships in David Fincher’s films. Across his body of work, the writer argues, Fincher has developed a habit of picking apart and undoing the bonds of his characters, exposing them to the elements and tossing them aside. This, among other things, seems to be his modus operandi as a filmmaker. The essay, which I cannot recommend highly enough, was written in preparation for the director’s latest film, an adaptation of author Gillian Flynn’s thriller novel “Gone Girl.” The topic could not be more fitting. Flynn’s book is a ballsy and relentless domestic drama masquerading as a whodunnit, a satire of the modern American marriage that is both slick and depraved: the two qualities that Fincher accomplishes best. In adapting the novel, Fincher worked alongside Flynn, who wrote the screenplay. Notably, the two tweaked the ending so that even fans of the source material would be unable to watch in comfort, the only sensation that the text seems unwilling to abide. The resulting film is a study in intensities. It is wicked, ugly, uncompromising, cruel, perverse, sadistic, depressing, draining, and uncompromising. It is also brilliant.

Like the novel, Fincher’s film tells the story of Nick and Amy Dunne, an ostensibly happy and well-to-do couple residing in a McMansion in Missouri. On the pair’s fifth anniversary, Nick comes home to find his wife missing, her place taken by an upturned and shattered coffee table. As the film progresses, investigators begin to wonder whether Nick—whose marriage was far from truly happy—had anything to do with his wife’s disappearance.

You could figure all of this out from the film’s eerie and staid advertisements, which hang tonally somewhere between the director’s adaptation of “The Girl with the Dragon Tattoo” and “Zodiac.” Ultimately, this setup is the least important aspect of the picture. The workings of the disappearance are revealed at the film’s midway point, and the remainder of the film serves as a vehicle of psychological and spiritual fallout, an autopsy for a body that may still be breathing.

The film will certainly be called a thriller and a mystery, and those who classify it as such will not technically be wrong. Fincher has proven with “Seven” and “The Girl with the Dragon Tattoo” that he is a masterful craftsman of these genres of films. He has also proven that within these narrative structures, he can be far more deceptive than his plots would imply. “Gone Girl” is a wonderful example of genre filmmaking, but it is also a Trojan Horse. Or a Pandora’s Box.

What is inside? Many critics have settled on the same answer as sufficed for Flynn’s source material: a satire of marriage. After watching the film, it’s easy to see why this is so. Like all satires, “Gone Girl” certainly has an ethos of deconstruction and subversion. But this is not a dissection. This is a dismembering. For the film’s gripping two-and-a-half-hour runtime, Fincher takes the concepts of union and connection—trust, faith, loyalty, happiness, commitment—and tears them limb from limb, extracting the ugliest organs for display, burning the corpse and salting the earth for a mile around the ashes. It is scorched earth with a venomous sense of humor and a blistering eye for detail. It is the result of two beautiful monsters in a five-year cage match that has finally reached its last round.

Those monsters are expertly played by Ben Affleck and Rosamund Pike, who are both perfectly cast and working amongst one of the best ensembles in recent memory. In their own strange way, they manage to humanize Nick and Amy, but only up to a point. This is not the sort of humanization that allows you to empathize and care. It is the type of humanization that only wants to convince you that these people could be flesh and blood, and that their hateful sorrow and rage might just be capable of sneaking across your threshold. Because, fundamentally, “Gone Girl” gets off on disorientation. Even as the plot unfurls with ruthless intentionality, Fincher ensures that the audience feels lost and isolated. This is a film whose alternating images of privilege and depravity leave nothing for the audience to grasp onto but the pinpricks of relatable decency and humanity that are gleefully obliterated one after another, only yo be replaced with twisted and malicious doppelgängers.

Fincher has crafted a wonderful and haunting stage for his marital penny dreadful, a smooth and morose landscape bathed in tones of yellow and grey. The camera moves slowly but remains limber and deft, daring viewers to see this grotesque, invented world as anything but natural and real. Cinematographer Jeff Cronenweth, who worked with Fincher on “The Social Network,” “Fight Club,” and “The Girl with the Dragon Tattoo,” uses the frame to create spaces that seem both familiar and alien, decorated with all of the luxuries and fascinations that might spell safety, yet infested with deadness, a sensation only elevated by the insanity-as-sound score provided by Trent Reznor and Atticus Ross. The sum is an eerie flattening of depth and texture: the domestic universe as a diorama, a manufactured world in which we’re all allowed to be the self we think others expect, in which we’re required to play out every hyperbolic ferocity that those personas disguise.

The end result is one of the best films you may never want to see again: a monument to every brutal thing that you were ever afraid might exist within you and a brutally funny dissertation on how we become conditioned to deceive and destroy those closest to us. “Gone Girl” draws on the strengths of each of Fincher’s previous works and winds them together into something hideously engaging, numbing, affecting, and breathtakingly crafted. It’s the sort of film that makes Fincher’s other films, like “Seven,” seem upbeat. With his strange conglomeration of horror, drama, thriller, and comedy, David Fincher seems to have found the apex of brutality as art, and it makes for an arresting view. But there are absolutely no guardrails.