President Roth, Board of Trustees Announce Coeducation of Residential Fraternities

All on-campus residential fraternities will have three years to become "fully coeducational."

All residential fraternities must become fully coeducational over the next three years, according to an announcement on Monday, Sept. 22, by University President Michael Roth and Chair of the Board of Trustees Joshua Boger ’73. 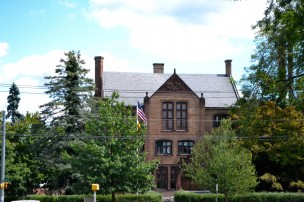 “Some have urged that we preserve the status quo; others have argued for the elimination of all exclusive social societies,” read the announcement, which was released via email to students, faculty, and alumni. “The trustees and administration recognize that residential fraternities have contributed greatly to Wesleyan over a long period of time, but we also believe they must change to continue to benefit their members and the larger campus community. With equity and inclusion in mind, we have decided that residential fraternities must become fully co-educational over the next three years.”

University Manager of Media and Public Relations Kate Carlisle explained that three years seemed to be an appropriate amount of time for this decision to become fully implemented in Greek life.

“[Three years] seemed to be an optimal time frame, given that membership in the fraternities changes year to year,” Carlisle said. “People pledge and some people graduate, so three years seemed to be an appropriate and optimal amount of time to give the fraternities to develop a coeducation plan with the help of Student Affairs and come up with something that would be a meaningful and qualified response to this.”

Carlisle further stated that the topic of coeducation has been under consideration for years.

“This decision is the result of conversations and concerns and discussions over a long period of time, I would say probably years,” Carlisle said. “I know it’s been under consideration for as long as I’ve been here [since the beginning of 2013].”

Several recent events that occurred at Wesleyan’s residential fraternities raised discussion among students, parents, and alumni, as well as the administration, as to the nature of the role of fraternities on campus.

In 2012, an anonymous woman filed a lawsuit against the University and the Beta Theta Pi (Beta) fraternity’s Mu Epsilon chapter regarding a reported sexual assault at the fraternity house in 2010 by the guest of a Beta brother, a non-University student. The University was charged with violating Title IX, a federal gender-equity law. In March 2014, a student filed a lawsuit against the Psi Upsilon (Psi U) national fraternity and the University’s Xi Chapter, alleging that in May 2013, she was sexually assaulted by a fraternity pledge in the common room of the Psi U house.

The Wesleyan Student Assembly (WSA) passed two non-binding resolutions in April 2014 to address the prevalence of sexual assault and rape culture at the University. On April 20, 2014, Resolution B was passed, calling for all fraternities with houses on campus to become coeducational. The following week, on April 28, 2014, the WSA passed Resolution D, which called for increased regulation of Greek life on campus.

Carlisle explained that the newly enacted decision is the end result of several conversations and input that Roth has received over time.

“At the beginning of this calendar year, [Roth] said that he was taking suggestions and that he would ultimately deliver information, some kind of report to the Board,” Carlisle said. “After a summer of soliciting and getting input from a wide variety of interested parties including current students, faculty, alumni, current fraternity members, former fraternity members, members of the community, many, many people, he felt he had enough information for the University to go ahead and start thinking about if policy changes were warranted and what those should be.”

The most recent incident at a fraternity house on campus occurred at the Beta house on Sept. 7, when a female sophomore fell from a third-story window of the house and was seriously injured. Following this, the national Beta Theta Pi Foundation suspended its Wesleyan chapter. The house formerly belonging to Beta is now off-limits to all students for at least the remainder of the 2014-2015 academic year.

The administration’s announcement that all residential fraternities must coeducate comes just two weeks after the closure of 184 High Street, the former Beta house.

Daniel Wittenberg ’16, President of Wesleyan’s chapter of the Psi U fraternity, said that Psi U welcomes the University’s decision to coeducate fraternities and sees this as an opportunity to become a more inclusive community on campus.

“It will be one among the many changes that we will be, and have been, implementing to make our house safer and more comfortable and to make our organization more equitable and beneficial for all members of the campus community,” Wittenberg wrote in an email to The Argus. “We look forward to working with the University and the greater campus community to make this transition as smooth and successful as possible.”

Wittenberg added that Psi U will be releasing a statement soon to explain their plan for moving forward. He noted that Psi U is encouraging females interested in getting more involved with their fraternity to apply to their External Social Committee, a group of non-brothers with whom they share control of the social space.

“I think the university’s decision to mandate coeducation among single-sex residential fraternities is by far the freshest…thing to happen to Greek life during my time at Wesleyan,” de Venecia wrote in an email to The Argus. “I am personally so…hyped about it and am incredibly excited to watch a new, improved, more inclusive and friendly Psi U grow throughout the coming years.”

President of Alpha Epsilon Pi (AEPi) Michael Creager ’15 stated that AEPi was not surprised by this decision.

“After the events that have occurred at residential fraternities over the past few years, we truly hope that these efforts will help to make Wesleyan a safer place,” Creager wrote in an email to The Argus. “We feel that Greek life has an important role to play here at Wesleyan, whether it’s within co-educated residential spaces or with single sex-identifying organizations. However, we see this as a first step in a series of reforms to improve the role of fraternal societies within our campus and to make [W]esleyan a truly safe and inclusive space.”

Other fraternity leaders have expressed disapproval for this new mandate.

“This decision seems to do away with freedom of association for a specific, carefully chosen segment of the so-called Wesleyan ‘community’,” President of Delta Kappa Epsilon (DKE) Terence Durkin ’16 wrote in an email to The Argus. “The University is telling us who [our] friends are going to be, and who we must choose as our leaders. This is just not right. This is just not Wesleyan. We are exploring all options with our Alumni and undergraduates, and we will have more to say in the near future.”

According to Carlisle, if Beta reorganizes at the University, the fraternity will be subject to the same coeducational policy. Martin Cobb, Director of Communication for the national Beta Theta Pi Foundation, spoke to this.

“The Fraternity is working to better understand the specifics of Wesleyan University’s decision to force its fraternities with chapter houses to become co-educational,” Cobb wrote in an email to The Argus. “As that analysis continues, the leadership of [Beta] seeks to strongly underscore its belief that there is a purposeful place on college campuses for young men to come together and forge the bonds of fraternal brotherhood as they develop academically and prepare for a lifetime of civic duty.”

Carlisle explained that Student Affairs will be working with each fraternity to coordinate timelines for coeducation, as well as some guidance and assistance throughout this change.

“The reason the administration didn’t set specific quotas and guidelines was a recognition that different fraternities have different ways of doing business and they’ll have to move forward with their own guidelines with the help of Student Affairs,” Carlisle said.

“Alpha Delta Phi went through this transition many years ago, and their experience will be instructive as we move forward,” Whaley said. “Wesleyan students are smart and creative problem-solvers, and I hope the fraternities will bring those skills to this challenge…We’ve invited each of the all-male fraternities to develop their own plans for realizing this goal, and I will be working with them as they develop and implement their plans to make sure they are likely to reach our objectives.”

Roth stated that he believes that the coeducation policy is in line with the University’s previous actions and values.

“This step is in keeping with our commitment to enhancing an equitable and inclusive residential learning experience at Wesleyan,” Roth said in a statement. “We have long experience with co-educated Greek societies, and I look forward to working together to ensure a successful transition.”