On Wednesday, Sept. 10, President Michael Roth and Vice President for Student Affairs Michael Whaley announced that Beta would be off-limits to all students for at least the duration of this academic year. 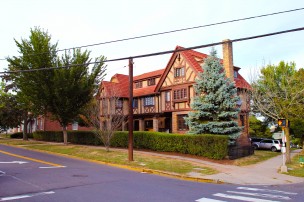 President Michael Roth and Vice President for Student Affairs Michael Whaley informed the student body via email on Wednesday, Sept. 10, that the program house belonging to Beta Theta Pi (Beta) will be closed and off-limits to students for at least the remainder of the 2014-2015 academic year.

In their email, Whaley and Roth stated that the decision to close the Beta house, located at 184 High Street, was a response to numerous incidents that have occurred at the residence.

“We have lost confidence in the ability of the fraternity members to manage social and residential activities at the house and abide by university policies,” Roth and Whaley wrote. “Wesleyan has an obligation to do what it reasonably can to ensure the safety of every member of the community, including the Beta fraternity members and their guests.”

Martin Cobb, Director of Communication for the Beta Theta Pi Foundation, wrote in a press release that, due to the closure of the fraternity house and following other recent events, the National Foundation will suspend the chapter’s operations at the University.

“The chapter has been in the midst of an extensive period of self-renewal and reorganization following several years of challenging behavior,” the press release reads. “Moving forward and building positively on that reality, Beta Theta Pi must continue to accept responsibility for its members’ actions that have not lived up to the expectations of the University, community and larger General Fraternity. To that end, effective immediately, the Fraternity is downgrading the chapter’s status from ‘Probation’ to ‘Suspension.’ This will provide an opportunity for appropriate measures of collaboration to be acted upon as a result of examining the broader context of the chapter’s culture and its short- and long-term future. The University will receive Beta’s full commitment and cooperation during this process and will have an active partner in helping develop Beta’s future contribution to the student body and Wesleyan experience.”

Interim Director of Public Safety (PSafe) Tony Bostick declined to comment on the decision to close the house or on future policies regarding students who enter the house. He stated that PSafe will be meeting with the administration early next week to discuss the specifics of future enforcement of the ban.

According to University Manager of Media Relations and Public Relations Kate Carlisle, speaking on behalf of Roth’s office, all other fraternities are unaffected by the closing of the Beta house.

“We identified open rooms, some singles and some doubles, in residence halls and program houses,” Koerting wrote in an email to The Argus.

Koerting declined to disclose the exact locations of any of these rooms, out of respect for the students’ privacy.

The most recent incident at Beta, which Roth and Whaley cited in their email, occurred on Sunday, Sept. 7, when a female sophomore fell from a third-story window of the Beta house and was seriously injured. She is currently recovering at St. Francis Hospital in Hartford.

President Michael Roth updated the campus community on the student’s condition in an email on Wednesday, Sept. 10.

“She remains in the Intensive Care Unit of a Hartford hospital, and those close to her have very much appreciated the expressions of support and care from the Wesleyan community,” Roth wrote. “…We are all hopeful for her recovery and would love to welcome her back to Wesleyan whenever she is healthy enough to resume her studies.”

Beta Theta Pi Administrative Secretary Jud Horras, quoted in the national fraternity’s press release, stated that the primary focus of the organization in this situation is the injured student’s well-being and recovery.

“As difficult as it may be at the beginning of the academic year for all of our undergraduate members to be moved by Wesleyan University out of the chapter house into alternative university housing, Beta Theta Pi undergraduates and alumni remain focused first and foremost on the recovery of the young woman who attempted to climb onto the roof of our chapter house this past weekend,” Horras said. “She is a close friend to many undergraduate Betas and they are spending time in the hospital supporting her and her family. Initial accounts indicate this appears to have been a simple accident.”

In an August email to The Argus regarding Beta’s plans for the year, Beta President Niall Devaney ’16 discussed Beta’s plans to have sober brothers at every event who “will act as contacts for any visitor who needs help with any situation.”

“Our goal is to hopefully be able to work with the Wesleyan community as a whole to make our campus a safer place, and in turn give that sense of safety to every student who attends,” Devaney wrote.

Devaney’s discussion of safety came in light of a history of incidents reported at Beta. On Oct. 8, 2012, an anonymous woman referred to as Jane Doe filed a lawsuit against the University and the Beta Theta Pi fraternity’s Mu Epsilon chapter as a result of a reported sexual assault by John O’Neill, a non-University student and guest of a Beta brother, at the Beta house on Oct. 30, 2010. The suit charged the administration with violating Title IX, a federal gender-equity law, by neglecting to put in place sufficient measures to prevent her assault. The lawsuit was settled on Aug. 30, 2013, though the details of the settlement were never disclosed.

At the time of the sexual assault incident, the Beta house was considered off-campus housing for all students residing in it. In response to Jane Doe’s assault, Whaley issued a statement in February 2011 prohibiting students from using any property owned, leased, or operated by private societies not recognized by the University. Students found in violation of this stipulation would face disciplinary action.

As a result of this policy and under continued pressure from the University, Beta decided to return to campus as a program house and was formally recognized by the University in June 2011.

In November 2012, the University denied Rho Epsilon and Alpha Epsilon Pi as applicants for an open program housing space.

Whaley elaborated on this denial of program house space in an email to The Argus following the decision.

On April 9, 2013, the Office of Public Safety responded to a call from a female student who reported being physically assaulted at the Beta house. The assailant also reportedly attempted sexual assault, but the caller was able to resist and escape.

The Beta president at the time, Elliot Albert ’14, wrote in a statement that the incident was part of a larger problem within the University community.

“Events such as this compromise the sense of safety and security that we as members of a campus community deserve, and we have zero tolerance for such actions,” Albert wrote. “…That our house became the location of this unfortunate and intolerable crime is a powerful reminder to the entire Wesleyan community that we collectively need to do a better job at raising awareness and prevention of these types of events.”

On April 21, 2014, the Wesleyan Student Assembly (WSA) passed Resolution B, calling for all fraternity houses to become coeducational in order to retain program house status. The Board of Trustees will discuss this resolution and the future of Greek life on campus at its meeting later this month. Resolution D, which calls for increased regulation of Greek life on campus, will also come before the board at that time.