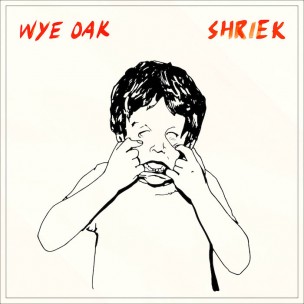 With any drastic change of course by an artist, there will be trepidation. We become comfortable with what we know. We find beauty in something and we clutch it to us. Sometimes we clutch it too tightly. So when it was announced that Wye Oak, the Baltimore folk- rock duo, would be relying on synthesizers more so than guitars for its new LP, Shriek (released on April 29 this year), a palpable anxiety surfaced among fans. The group’s previous album, Civilian, was an almost entirely guitar-driven work. It was also nearly perfect: tightly coiled, aggressive, stomach-churning, and lovely. Their previous two albums (If Children and The Knot, released 2008 and 2009 respectively) were also founded on the duo’s unique, guitar-based aesthetic: mournful, yet charged with an almost corroded electricity. For many, the idea that Wye Oak could be Wye Oak without this sound was distressing. Fans assumed the worst was on its way, and many braced themselves. For those fearful who have yet to re-emerge into this post-Shriek world, I’m happy to say that we’re going to be okay. The record is fantastic.

It’s truly a testament to how well Andy Stack and Jenn Wasner understand their own musical tics—their band’s energy and momentum—that a Wye Oak album stripped of the band’s defining sonic texture can sound so brilliantly, boldly, and defiantly like nothing other than Wye Oak.

From the beginning, Shriek is clearly—and wisely—nothing like Civilian. To attempt to recreate or redirect whatever special yearning chemical that propelled the duo’s last release would have inevitably resulted in failure or unintentional parody. As such, in the place of Civilian’s jagged yowling lullabies, Shriek puts forth something wholly different: something soft, hopeful, and dusted with a sort of unnameable bubbling energy. Simply put, Shriek is a much happier piece of music, but it is not by any means a carefree record. Its music and lyrics still conjure up a distinct unease, but on Shriek it is more like a morning haze than a lonely fog. The uncertainties on the album seem more like questions than defeats. The energy seems wild in a youthful way. The atmosphere feels something like sunlight, promising both days of potential agony and days of potential salvation.

Wasner’s voice once again shines, blanketing each arrangement with its smoky, spanning tones. It seems to mingle effortlessly with each track’s new and crackling texture. The record as a whole seems to glide between songs with its own special fluidity, conscientious of every little sound and how it’s being used to inform the larger animal. The result is a marvelous sonic ecosystem of remarkable symmetry, poetry, and invention. It’s also a magnificent step forward for the band as a whole, regardless of whether the pair decide to return to their original sound or not. In many ways, Shriek is a promise of capability, an assertion of vision, of consistency, and of artistic fearlessness. It’s the smoothest, sweetest retort to those who doubted that Wasner and Stack might pull this off; a reminder that an artist is responsible to the whims of his or her vision more so than the handwringing of fans. Standing alongside the band’s other three records, Shriek wears its wonderful new colors and stormy optimism with pride, dynamism, and maybe even a little bit of “I told you so” flavor.