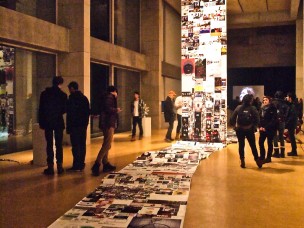 Based in Paris, Evan Roth is an American artist whose work delves into the complexity of empowerment through misuse. His work is based on the alteration of supposedly fixed structures and the integration of hacking culture into art.

Roth’s work is featured in the permanent collection of the Museum of Modern Art in New York and has been exhibited at numerous other prestigious institutions, such as the Centre Pompidou, the Kunsthalle Wien, and the Tate. He has received numerous awards, including the Golden Nica from Prix Ars Electronica, Rhizome/The New Museum commissions, and the Smithsonian’s Cooper-Hewitt National Design Award.

“Intellectual Property Donor,” his latest exhibition, made its American debut at Wesleyan’s very own Ezra and Cecile Zilkha Gallery, which will be displaying his work from February 5th to March 2nd.

To open the gallery on Wednesday, Feb. 5, Roth gave a highly engaging talk in which he took the crowd through his experience working with various forms of street art, especially graffiti, and his unique approach to equating the essence of hacking culture with artistic creation. In his talk, Roth explained that, unlike its mainstream image, hacking is not necessarily an act of theft but rather the altering of an object or system to a purpose it was not originally intended for.

Two particular pieces in Roth’s exhibition highlighted this unorthodox approach and the occasional radicalism it requires. The first was a fake TED stage, on which attendants can capture either a picture or an entire video of themselves as though they were certified TED speakers. As Roth explained, the idea of this is to challenge the power TED has as an institution in association with the notion of sharing “ideas worth spreading.”

The second work was a massive piece comprised of hundreds of tracing papers, which Roth had stuck upon his iPhone while playing “Angry Birds.” When plotted alongside each other, they show t

he movement of his fingers as he finishes every single level in the game. Serving as a commentary on the contemporary usage of technology, the piece is meant to highlight the magnitude of the moments we spend on our screens.

Before and after the talk, Roth was generous enough to spare some of his time to further elaborate on some of the interesting points of both the talk and his philosophies in general.

Evan Roth: They’re right. I think it’s powerful because it is vandalism, it is illegal and, for me, that’s why it’s interesting, ’cause it’s one of those places where you truly have uncurated free speech. It’s like there’s no moderator removing comments from the comment thread. There’s no curator allowing work into the exhibition. It’s just what someone said, and it’s gonna stay there until somebody cleans it off.

I think it’s good to have room for that. I don’t think everybody should agree with the practice of graffiti. I think its power comes from [how] it does make people feel uncomfortable in a way. To me it’s this great story that some young people [who] came from poor areas in Philadelphia and New York in the ’60s and ’70s and they managed to come up with this idea that would then, in 10 years, change the way every city in the world looks. You get off an airplane in any city over a million people in population, there’s gonna be graffiti.

To me, it’s hard to get upset about graffiti [because] I think a lot of the people you hear complain about [its] legality don’t live in cities. The people who make the biggest fuss are the people who live in the suburbs and are imagining someone coming down their road to their cul-de-sac and spray-painting their garage door, which doesn’t make sense. That wouldn’t happen. But when you’re in the middle of New York or Los Angeles, and there’s such little [space] that represents the people who live there—it’s like McDonald’s has billboards, Coca-Cola has billboards, the U.S. Government and the military got billboards, but there’s no representation for the people actually living in that building where the billboard is hanging from. And to me graffiti fills that function. It’s visual representation of people who actually live in the city, and to me that’s so much more interesting than the people who advertise in the city.

A: In distribution of art to the public, where should the line be drawn between nobility and piracy?

I draw those lines’ ‘cause I fall under this belief that digital media wants to be copied. Computers are essentially copying machines, and to deny that is to deny the kind of fundamental nature of what those systems do. I’ve heard it being described as water coming down a mountain. Data’s natural state—and water’s natural state—is to be copied, to go down the mountain. You could put up a wall, you could put up a dam, and over time you could collect some and charge people for it, but eventually that dam is gonna break. It’s almost like it’s violating its nature to do that.

A: Your talks and philosophies deal a lot with the notion of the artist as a hacker. As you said yourself, most people think of hacking as going online and stealing credit cards. How do you differentiate between your understanding of hacking and the mainstream image?

ER: That perception of hacking culture has been so driven in, especially from Hollywood and movies. They love that image of a hacker stealing a credit card, and that’s been a conversation in the hacking community since the beginning. They used to try to say that there’s a community called crackers, and crackers are the ones cracking software and stealing things, and hackers are a little bit more benevolent. Now the differentiation is white-hat or black-hat hacker.

But to me it doesn’t feel like such a stretch because it informs all the work I make to see how someone may circumvent a system on the Internet and how that could be used as an approach toward solving a different problem off the Internet. It doesn’t seem to me like such a big leap anymore, but I understand how people who aren’t interested in these systems, of course, they would just get what they saw out of a movie. You don’t even need to know how to write code to be a part of this culture [or] take aspects from this culture that could be applied to other things.

Whatever you’re doing, there are ways in which you can approach that using these philosophies that come from these hacker communities. And usually they’re pretty easy to implement. Part of the ethos is trying to find the quickest way from point A to point B; [to find] how you can elegantly be lazy and have all the cards fall into the right place. It’s a way of thinking that to me always has ramifications outside the computer screen.

A: How should the Internet be used in the development of art?

ER: I feel like my answer to that question would have been different 5 or 10 years ago. But I think now the Internet is just such a part of culture. It’s like [when] you check into a hotel and, okay, does it have a bathroom, does the door lock, and is there Internet? It’s part of us now. 10 years ago the Internet was still an anomaly; still this cool thing that maybe you know how to navigate, maybe you don’t. Now, almost everyone knows how to navigate it. Now, almost everybody uses it on a daily basis. That’s making it more interesting [because] the technology is now taking a backseat to just being a part of culture.

And so I think art should engage with it the way [it’s] always engaged with culture. It’s just now [that] this is such a huge part of our culture. There’s a brand of net-art, Internet art, that’s meant to be viewed on the Internet, and that’s interesting and that’s a cool practice. There’s another way the Internet is influencing the art, and that’s the way culture has always influenced the arts. Artists have always made work about the world that surrounds them; the world that they know and so what I’m more interest in is how, as the Internet gets more and more mundane and more a part of our daily existence, art will just naturally reflect that it won’t be anything that’s forced into it.

A: Over the ages, art as a public demonstration has sort of weakened, and the artist today is often perceived as a figure of the bourgeoisie as opposed to a figure with a standard and accessible career. What do you say to that?

ER: I know what you mean. Especially if you’re talking about the art market, there’s been this steady climb in prices, and you hear about million dollar selling prices at auctions and all these huge things, and that keeps building up and up and more money is getting involved, and that is one stereotype of the artist in today’s culture.

To go back to the Internet, I think [it’s] asking a lot of questions about what it means to be an artist. I think there’s a whole generation of people right now who are making things online and are slowly getting more and more comfortable with the fact that what they’re making might be art. Even the work I’m doing, it doesn’t fit very easily into a lot of people’s definition of what art is. Almost everything in the gallery wasn’t made by the hand of the artist; this traditional idea of [what] art is about, these single solitary geniuses that are crafting art objects that are touched by the hands of the artists, and then collectors will collect these pieces. Most of the work I’m inspired by aren’t those things.

The web is allowing more and more people to be creators. You see DIY [Do-It-Yourself] culture taking off and you see net art taking off and you see people that [you] wouldn’t consider them part of an art movement, but maybe when we look back on this in twenty years, there are probably more people making this stuff and sharing than there has ever been. So even though the image of the artist is still fancier than it needs to be, I have a lot of hope that the Internet will level that out.