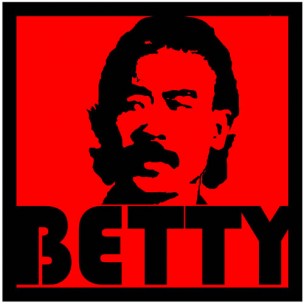 In October, campus electronic musician Matan Koplin-Green ’15, who produces under the name of Betty, released his debut music video for the song “President Michael Roth,” titled “How to Do the Michael Roth.” The video revolves around a three-second GIF of President Michael Roth doing a short jig in front of the baseball diamond, and since its release it has gained over two thousand views on YouTube. I sat down with Betty to talk about the video, his music, and, of course, Roth.

The Argus: All right, just to start off, tell us a bit about your music.

Betty: I’ve been playing in bands and stuff at Wesleyan since I got here and more recently got into the electronic music production side of things, learning the programs and the software instruments and all that stuff, and I just decided it was time to release something and put it out there, you know?

A: So what possessed you to make your debut based around, and consisting of, President Roth?

B: It’s interesting. I think Michael Roth is a character here at Wesleyan, and he needs more attention in the arts. I basically thought it would be hilarious if people were dancing to a song about him in a party, just kind of that dirty electronic sound, but you hear “Michael Roth,” and it’s like “I’m dancing to my president’s name right now.” I thought he needed something like that—it’s a tribute, an homage if you will. It’s definitely harmless; there’s no negative vibes about it.

A: So, it’s not like Trillion Dollar Boys Club’s infamous sound bite.

B: Yeah, I heard that right before my song came out, and I thought, I need to release this right away because this can’t be their thing; I’ve got the Michael Roth song. So yeah, it’s clean, and it’s danceable.

A: So where on earth did you find that footage of Michael Roth dancing?

B: I actually was in New York this summer doing an internship, and I was at a party with some people who had just graduated and some seniors now, and I showed them one of my songs and one of them, Dan Wissinger [’13] was like, “Wow, I just took this video that would work perfectly with the song.” So basically, one morning he was walking around campus at 5 a.m. for some reason and took a video of Michael Roth and was like “Hey, do this dance,” and he made a GIF of it. It’s only like two or three seconds, but I was like, “alright, this can’t be a coincidence. I need to do something with this.” So I did a little iMovie action and spliced it and added some filters and random stuff. It’s meant to be funny mostly, but I like calling it a music video to my single.

A: So it was really out of luck?

B: Totally out of luck. If I hadn’t been there at that time and he hadn’t shown me that GIF, which was buried on Facebook or Imgur, it wouldn’t have even happened, but it did, and it was the perfect marriage of audio and visual Michael Roth-ness.

A: I take it that the other footage came from a graduation speech?

B: That’s another video I found on YouTube. I used a few random clips. From the speech part, that was from a graduation speech he did a few years ago. Luckily, I could download the video for it, too, and try to synch it up as much as possible to make it work together.

A: Then who’s that at the beginning actually singing “Do the Michael Roth”?

B: At the beginning, that’s actually me and my friend. I got my friend over from Milwaukee, when I started the song, and just said “Say ‘do the Michael Roth’ a few times into the mic,” and we just kind of sang it a few times. [I] cut it up a little bit. I pitched it down a little bit to sound a bit gangster, and it did the trick.

A: Have you seen people dancing the Michael Roth yet?

B: I’ve seen all kinds of dances, all over campus. Before the video came out, I asked a few friends in New York what would the dance be, and we had all kinds of weird ideas of what kind of funny dance we could make it. But once I saw the video it all came together. It’s the Michael Roth; it’s a certain move.

A: Do you think the “Michael Roth” might become the new “Gangnam Style” of campus?

B: I really hope so. That was my idea. It hasn’t really exploded to the level that I wanted it to, but some day, maybe it’ll be uncovered at some point and someone will go, “Wow, we need to bring this back.” But right now I’m just doing what I can with it. When I put up the video, I was in the library, and I sent it to a friend over Facebook, and he put it on his page. Then I saw a random group of friends watching it and was like, “Oh my god, this is awesome!” I ended up getting a few hundred hits overnight; now it has two thousand, but it had a mini viral factor at the beginning. It was fun, just watching the numbers going up. It’s meant to be funny. It’s meant to make you laugh.

A: Also, I’ve been wondering, where does the name Betty come from?

B: It’s actually a reference to “Kung Pow: Enter The Fist.” I saw it a while ago when a friend recommended it to me, and I realized Betty can be a man’s name. In “Kung Pow” he’s one of the masters, so I thought, I can take that. I’m going to make Betty cool for guys. Breaking gender boundaries, that’s what it’s all about.

A: So what’s next for Betty?

B: I don’t know. The EP was three songs and a few collaborations. I really like collaborating with people. One of the songs was a collaboration with my friend who raps under the name DK9. I had a rap in there under the name MKG, and that was really fun. I was in New York with my friend Dylan, and he was like, “Let’s make a rap about how cool we are,” which is what 90 percent of rap is about anyway, so we thought it would be funny to do just a typical club rap song. That ended up probably being my favorite. It kind of had a “212” vibe to it and a little dubstep influence and a lot of rap. I really like that style of combination.

I just like putting a lot of stuff together, which is what I did on the EP. I hope to do more stuff with more collaborations, more electronic house music, maybe get a little deeper. This doesn’t show the deepest side of my music taste, but it’s nonetheless in demand in this music culture. People love dance music right now, so I thought, give the people what they want. That’s the philosophy of this one.