Cross Talk: “Bros” is a Romantic Comedy with Both Laughs and Insight 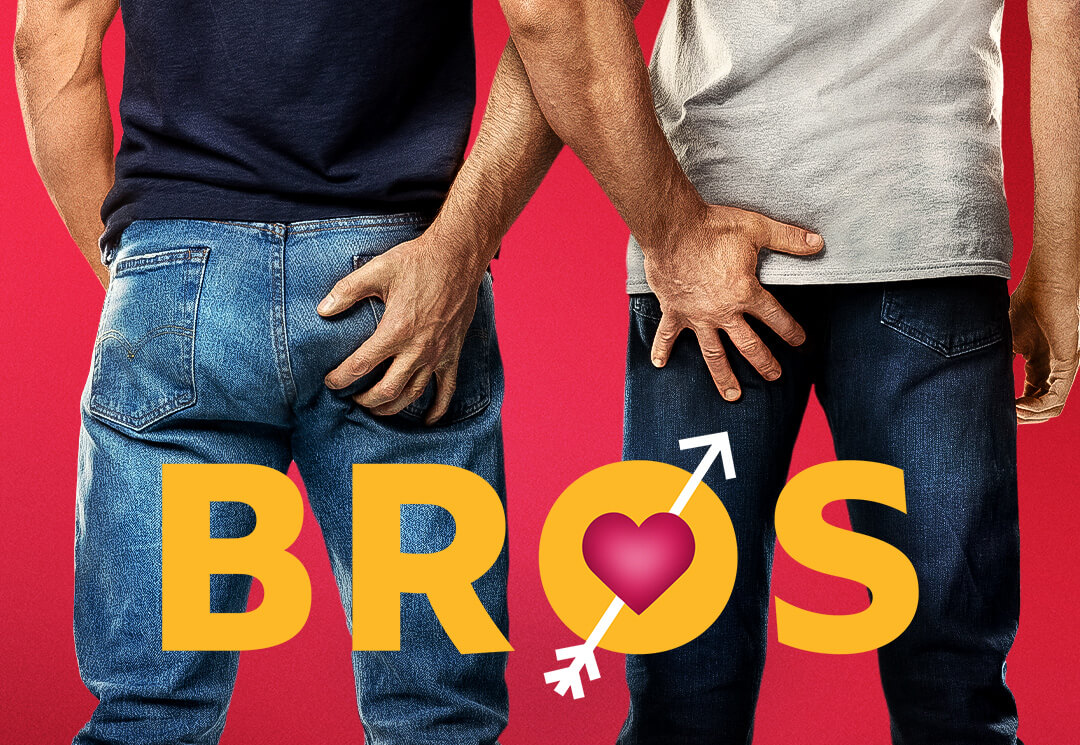 In a cross talk, two writers sit down to discuss a book, movie, TV show, or piece of art they both feel strongly about. Sometimes they disagree; other times, they’re in perfect harmony. Here, Editor-in-Chief Oscar Kim Bauman and Assistant Arts & Culture Editor Ben Togut discuss “Bros,” a romantic comedy film directed by Nicholas Stoller, and written by Stoller and Billy Eichner.

In “Bros,” Eichner stars as Bobby Lieber, a podcast host who is recruited to serve as curator for a museum on LGBTQ+ history and culture. At 40, Bobby has never been in a relationship, but that seems poised to change when he hits it off with the similarly commitment-averse Aaron Shepard (Luke Macfarlane).

This conversation has been edited for length and clarity, and contains spoilers for “Bros.”

Oscar Kim Bauman: I wasn’t sure what to expect, but I had a lot of fun. I thought it was really cute.

BT: I liked it too. I had heard about the discourse, and the marketing campaign had made me wary about seeing it, but I actually enjoyed the movie a lot. I really enjoy Billy Eichner’s humor.

OKB: I know [Eichner from] “Billy on the Street,” but I didn’t know what his acting range was. He was really good. A lot of it was that snarky, cynical persona, but he [also] gets sensitive and vulnerable, which is nice to see.

BT: He’s a good actor. He was on this show with Julie Klausner called “Difficult People” that I really enjoyed, so I know that he had acting chops.

OKB: So, Billy Eichner is playing a character named Bobby Lieber. Bobby is a podcaster, and he isn’t sure if love is for him. He gets emotional support from his friends, he has his sexual needs fulfilled by having hookups with random guys, and [he thinks] that is the equivalent of a romantic relationship. But then, he runs into [Aaron] at a club.

BT: There are times when Aaron, played by Luke Macfarlane, disappears and Bobby calls him out on it.

OKB: Bobby keeps trying to have a conversation, and then keeps turning around and Aaron’s gone. There’s this one moment where Bobby leans in for the first kiss and Aaron leaves, so he’s in that leaning posture for a second.

BT: I thought it was interesting how right after Bobby tells him off, Aaron wanted to talk to him and explore that relationship.

OKB: It shows he actually is interested in a romantic relationship. It’s your typical rom-com structure. You have your couple, they have their meet-cute, and they get to know each other. Then, later on, they have a fight and then they get back together and it’s a big beautiful moment.

BT: I also think another common rom-com trope was them not liking each other at the beginning and there being some tension.

OKB: Aaron and Bobby are from these different cultural backgrounds. Bobby is from New York City and has been in tune with queer culture from a very young age. Aaron came out later in life and has more “straight” interests. He’s a jock, he likes country music, and they have conflicts over that.

BT: Something else I appreciated about the movie was its discussion of gay body standards. Aaron is checking out these muscular guys, and Bobby feels insecure and questions if Aaron is attracted to him. I thought it was an interesting tension in their relationship. Another part that I appreciated was its commentary on gay culture and the idea of “toning it down.” We have the scene with Bobby, Aaron, and Aaron’s parents, when Aaron pulls [Bobby] aside and says, “Hey, can you please tone it down?”

OKB: He says “be normal.” And that’s very loaded.

BT: Bobby tries to do that at dinner and it all falls apart. He gets into this conversation with Aaron’s mom. She’s a second-grade history teacher, and Bobby asks if she teaches queer history and she says “Oh, that’s too young.” Billy starts to talk about his experience with gay culture as a child and it kind of explodes.

OKB: I thought it was really interesting how the movie explored two men who both are following these different ideas of masculinity…. I think all this serious conversation is making the movie sound very serious. To be clear, it’s a very funny movie.

BT: The movie looks at these two versions of masculinity and has an insightful take on what you have to be in order to fulfill these gay expectations or to seem like a cultured gay person. At the end of the movie, Bobby discovers that he was wrong in his preconceptions about being masculine and presenting masculine interests as something that is necessary and desirable.

OKB: Bobby is on the board of the LGBTQ+ history museum, and some of the arguments about what the exhibitions should be in it killed me. There’s a thing about whether they can make an exhibition that claims Abraham Lincoln was gay, which is funny, and it also touches on the question of to what extent can you say things about the sexuality of historical figures where you can’t know how they felt on the inside or what they did in private.

BT: Throughout the movie, he has these meetings with the team that he works with for the LGBTQ+ museum, and the banter between them is just gold.

OKB: There are a lot of irritable people bouncing off each other.

BT: I wanted to talk about this one moment where Bobby and Aaron are both on the beach and Aaron is appreciating his confidence. Bobby has this monologue about having to be confident as a gay person and being confident because nobody else would believe in you and being told that nobody wanted to listen to your stories, and having to develop confidence because the only person that you could rely on was yourself. Bobby was talking about going to school for theater and the director was like, “you’re too feminine and that will limit your roles as an actor.” When I was in high school and I didn’t get into this one show, I asked the director for feedback and she said, “You’re tall, you have red hair, and you pull focus on stage and that will limit the roles that you get in the future.” It felt like she was dancing around my more effeminate mannerisms.

OKB: [The movie is] very emotionally aware about social dynamics. I saw a review that used the word “therapeutic” to describe it and, after seeing it, that feels like a good descriptor. Because it does have these moments and lines of dialogue that really do touch on these deeper experiences and emotional topics.

BT: He’s releasing all of these emotions that he’s faced in his struggles as a gay man. Everything that he was keeping inside sort of spills out.

OKB: Because he has this very sarcastic personality, the moments when he is opening up and being genuine stand out.

BT: The emotional sincerity in the movie was great, [though] I think at times it felt almost ham-fisted. There’s a song at the end of the movie that was very over the top and saccharinely sweet.

OKB: There were moments where it’s very realistic and it’s very honest, and that can clash with these sort of big conventional rom-com moments. The big dramatic breakup scene or the sweeping declaration of love don’t feel as honest to me. Because so much of what you see in this movie is so realistic and nuanced that those more expected moments can come off as cheesy. Do we want to talk about the discourse?

BT: Let’s talk a little bit about the discourse. Last Sunday, right after the movie had come out and opening weekend had taken place. Billy Eichner got on Twitter and said “I was in LA and I saw the movie and I saw a bunch of gay people laughing” and addressed how the movie tanked. He said something like “straight people in middle America didn’t show up for us. And that sucks, but it’s life.”

OKB: It cost $22 million to make and it made less than $5 million its opening weekend. So it’s not gonna turn a profit. And that’s the thing. On one hand, it is annoying to see Billy Eichner on Twitter complaining that his movie didn’t do well. At the same time, I feel for him. If I made a movie, I would be very annoyed if it didn’t do well.

BT: I think part of the reason why this movie flopped is that the marketing campaign was very weird. I don’t think they marketed to the right audience. The marketing was like “this is the first gay rom-com released theatrically by a major studio,” and “this is historic and you should go see it.” One thing people don’t want to be told, especially people of a marginalized group, is “here is your representation, this is your piece of media, see it and enjoy it.” I think the marketing should have been around the fact that it’s a funny movie. Also, I love Billy Eichner, but his reach is very specific. People that have seen “Billy on the Street,” people that have seen his other television appearances, will want to go see it. But he’s not a huge name that pulls people to theaters.

OKB: Billy Eichner is famous, but he’s not that famous, and he’s also the most famous person in the movie. That was [also why it did poorly,] that lack of star power and the marketing focusing on its representation over its humor. You don’t want a movie to feel like homework, and this movie doesn’t feel like homework. It’s fun to watch. The marketing campaign really overplayed the historic aspect of it. It is the first major studio gay rom-com released theatrically. And the reason you have to put all those caveats there is because “Fire Island” came out earlier this summer and was a major studio gay rom-com released to streaming. How historic are we getting when you have to put all these specific qualifiers to say it’s the first one?

BT: I also think that certain movies that become gay cult classics usually aren’t movies that explicitly set out to be [that.] I actually really did enjoy the film, but I feel like-

OKB: Like, some of the best gay movies weren’t trying to-

BT: They aren’t explicit. Like “Rocky Horror Picture Show,” that isn’t setting out to be a gay movie, [though] obviously there’s a lot of like homoerotic content and it’s very campy.

OKB: I don’t want to get into it, but a lot of the movie is like, “gay relationships aren’t the same as straight relationships, we do things differently, that’s okay,” yet [the movie follows] the very conventional rom-com structure, just with gay men. Do you want to use the same kind of plot structure as your straight rom-coms have for decades? Also, beyond the homophobia, comedies have just not been doing well at the box office. They had not been doing well before the pandemic and though people are going to the movies again, they’re still not to the degree they were. There’s this idea that only certain movies are “worth” going to the theater for. For a lot of people, those are big blockbuster movies that you “have to see on the big screen,” and people think, “Oh, a comedy, I’ll wait to watch it on streaming at home later.” But at the end of the day, it’s disappointing that this didn’t do well because I thought it was a lot of fun. I would definitely encourage people to see it.