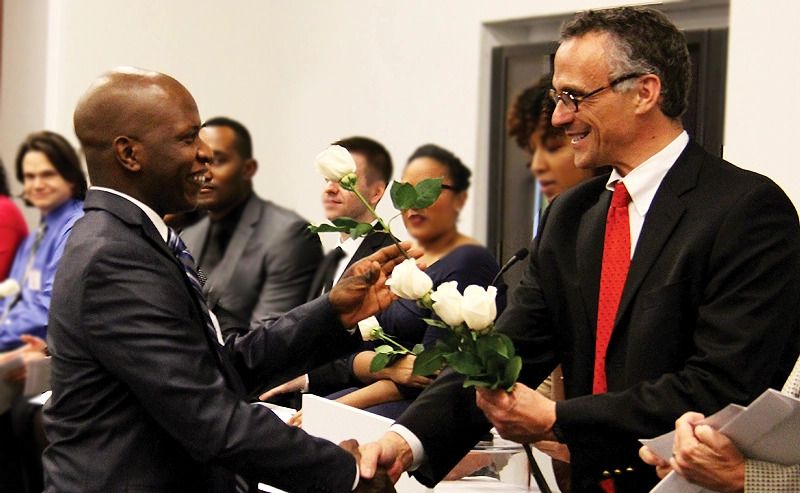 The University announced that it would end its partnership with the Posse Foundation’s veteran recruitment program beginning with the class of 2027 in the Wesleyan Connection Newsletter on July 13, 2022. There have been nine cohorts of Posse veterans at the University—one per graduating class—since 2013 when Wesleyan became the second university to join the program, following Vassar College. The Posse Foundation will continue to support Posse cohorts who have not yet graduated from the University, including the two members of the most recent cohort who deferred and will join the class of 2027 next fall.

“After consulting with our on-campus steering committee and the President’s Office, we made the difficult decision to discontinue the recruiting partnership with Posse, but not pull back on our commitment to being a welcoming institution for veterans,” Vice President and Dean of Admission and Financial Aid Amin Gonzalez ’96 said. “Since we made the announcement, we have been putting together strategies to engage and support prospective veteran applicants. We will pursue these both on our own and in collaboration with some other organizations that serve veteran students.”

The University cited a decrease in the number of candidates since 2019 that worsened as a result of the pandemic as a key reason for the change. Originally, Posse promised to provide Wesleyan with 20 applications, from which they would choose ten students to join the incoming class. However, the number of applicants presented to the University has steadily decreased and only six students were accepted to the Posse cohort for the Class of 2026, two of which deferred to the Class of 2027.

“We’ve been working with the Posse program for a while,” President Michael Roth ’78 said. “We’ve had great students from that program, but fewer students given the amount of time, energy, and money.”

Posse aims to facilitate veteran admission to and success in higher education by providing support and structure through a system of cohorts and mentors, in addition to the promise of full tuition coverage by the University. Cohorts provide community and support for veterans on campus by connecting veteran students in the same class year. Faculty mentors meet with Posse cohorts as a group once a week for 90 minutes and individually with each Posse scholar in their cohorts every other week. The University plans to continue the cohorts and a version of the faculty mentorship system following the conclusion of its partnership with Posse.

Posse normally guarantees four-year financial aid packages that cover the full cost of tuition paid by the participating university. Although the University will no longer be working with Posse, the University will continue to fund tuition costs not covered by Veterans Affairs (VA) benefits to ensure that education remains affordable and accessible to veterans.

“We make a commitment to the student that whatever their VA benefits do not cover, we will cover institutionally,” Vice President for Student Affairs Mike Whaley said. “And in some ways, it’s not so different from other students where we meet full need.”

One loss from the conclusion of the Posse partnership is the career advising resources which were tailored specifically to companies enthusiastic about hiring veterans. Going forward, veterans at Wesleyan will continue to have access to all the resources of Gordon Career Center for assistance finding jobs and internships.

One alum of the University’s Posse cohorts, Jordan Agricula ’21, who now works as a student services assistant in veterans and records at San Diego Mesa College, expressed his hope for this next phase of Wesleyan’s veteran recruitment process.

“When I first heard that Wesleyan was leaving the Posse Program, I was slightly surprised, but I get it,” Agricula wrote in an email to The Argus. “So much of my Posse experience was really a Wesleyan experience. Posse was having difficulty gathering a high number of qualified applicants that were interested in attending schools like Wesleyan or Vassar for various reasons. So I totally get why the administration decided to step away from the program and try on their own.”

The Warrior-Scholar Project is a nonprofit organization that works to bring veterans to college campuses and prepare them for classes. Whaley hopes that this partnership will be solidified with an on-campus boot camp in the summer of 2024.

The second of these organizations is Service to School, another nonprofit organization that provides veterans with free college and graduate school counseling.

“Our goal is to help veterans gain admission to the best college for them while empowering each veteran to make informed decisions about their education,” the Service to School website says.

Posse veteran Desaree Edwards ’25 found out about Wesleyan through Service to Schools when looking for universities in Connecticut, and, along with other students, emphasized that both of these programs are well known among veteran communities, in many cases more so than the Posse Foundation.

The Office of Admission will continue working to recruit veterans, including outreach at community colleges. Additionally, the Office plans to continue working with current and past Posse students to explore possible opportunities for recruitment.

“A couple of current Posse students and alums have volunteered to share the names of community colleges they are personally familiar with that have large veteran representation, to be supportive of our outreach efforts, and serve as informal resources to prospective veterans,” Gonzalez said. “Soon, we will take them up on their offers and ask them to serve as ambassadors for some of the programming that we will do both virtually and in person.”

Despite the shift away from Posse, the University has reiterated their commitment to supporting veterans on campus.

“Part of this has been reassuring the students that are in the pipeline now that our institutional support and support from the Posse Foundation will remain with them until they graduate,” Whaley said. “Pretty much nothing will change [for current students], we just will stop recruiting through Posse.”

Among those contacted for this article, there was a clear consensus that the presence of veterans on campus is integral to the University’s mission. Professor of the Practice in Chemistry Andrea Roberts, the faculty mentor for Posse veterans, is enthusiastic about the future of veteran life on campus. She emphasized that she has loved working with Posse veterans both in the classroom and through her role as an advisor and believes that they add tremendously to the culture and diversity of campus.

“I want to see Wesleyan continue bringing veterans on campus,” Roberts said. “I think their lived experiences, the culture that they bring to the campus, I think the ways that they involve themselves in committees and in sports—I think it’s a very valuable thing for our traditionally aged students to see.”

Assistant Professor of the Practice in Center for the Study of Public Life Robert Cassidy, another faculty mentor for Posse students and a veteran himself, echoed this sentiment.

Quinn Pierson ’24, a current Posse Veteran, emphasized faculty sentiments, expressing their support for the presence of nontraditional students among the Wesleyan student body.

“I think Wes should continue to recognize that nontraditional students, veteran or not, add value to classes,” Pierson wrote in an email to the Argus. “I’d love it if Wes began something like Yale’s Eli Whitney program for nontraditional students. Veterans have a distinct and valuable perspective from their service, but there are a lot of other nontraditional groups that would add experience and diversity of thought to the student body.”

Roberts noted that the end of the University’s partnership with Posse would allow her increased freedom in her mentoring. Instead of working through a prescribed curriculum, she can instead focus more on what will be beneficial to a cohort at a particular moment, incorporating student-led activities such as sip and paint.

“Getting to know people and sharing life experiences, those kinds of things helped all of us to understand each other a lot better than to sit around a horseshoe-shaped table looking at each other,” Roberts said. “There are certain things that Posse national requires that I just don’t think work.”

Roberts hopes that in the future, in order to increase institutional memory and create more efficient and organized processes for veteran support on campus, there will be a dedicated point person for veterans to go to for assistance. Additionally, she believes that a physical space dedicated to veteran use and support would be especially helpful in building community among veterans across faculty, staff, and students, and would also help bridge the gap with the Middletown community.

“I think we need a place for them, a dedicated space for military veterans,” Roberts said. “I can identify 16 people on the campus who are staff and faculty who’ve served in the military. It’s not something we usually talk about. You’ve probably had some of these professors, but you’d never know it. People don’t talk about it, allowing all of those people to get together and talk, bringing people in from our veterans community in Middletown to work with our scholars, to become part of a bigger community.”

Edwards noted that Wesleyan also needs to make changes to their internal systems and communication about subjects such as finance and housing in order to successfully recruit veterans without the Posse Foundation going forward.

“As the resources exist right now…there’s not really a centralized location for veterans to go on the Wesleyan website and be like, ‘all right, how will I succeed here, specifically financially,’” Edwards said. “So I think that I would’ve been more hesitant [to apply without Posse]. I think that the school is actually working on a specific veteran website and I think that if that is included, how is this going to get paid for it would be really useful because the draw for Posse was the guarantee that I was going to be able to afford it.”

Posse Veteran Cheyenne McLaskey ’26 added that the Office of Admissions needs to consider veteran applications differently than those of applicants coming out of high school as their qualifications do not line up exactly with graduating high school seniors and are often more experience-based than academic. Gonzalez stated that the University is committed to developing a purposeful recruiting process that takes these factors into consideration.

“I am not a Wesleyan student on paper,” McLaskey said. “If [Wesleyan is] serious about having veterans here, Wesleyan has to take into account life experience and not just academic experience.”

If internal recruiting is not as successful as hoped, the University will consider returning to their partnership with the Posse program.

“We’ve burned no bridges with Posse, so if whatever we do say next year and the year after isn’t working the way that we hope it will, then we could certainly talk with Posse and say, ‘We’d like to come back and be one of your host schools again,’” Whaley said.