In the first round of the NESCAC women’s lacrosse tournament this past Saturday, April 30, fourth seeded Wesleyan hosted the fifth seed Hamilton College, winning 10–8 in what could not have been a more picturesque game. The sun was out, the fans were loud, and trees were showing off their early spring colors. On top of it all, the win was only Wesleyan’s second win in the NESCAC tournament (the last one came against Colby in 2019 to stop a 9-game NESCAC tournament losing streak).

Hamilton took an early lead in the first minute of the first quarter, but Wesleyan quickly evened it up with an unassisted goal by Gil Horst ’23. The game continued in that manner, with Hamilton and Wesleyan exchanging one-goal leads throughout the first quarter and into the second quarter until Hamilton mustered up a few late goals in the second to push their lead to 6–4. 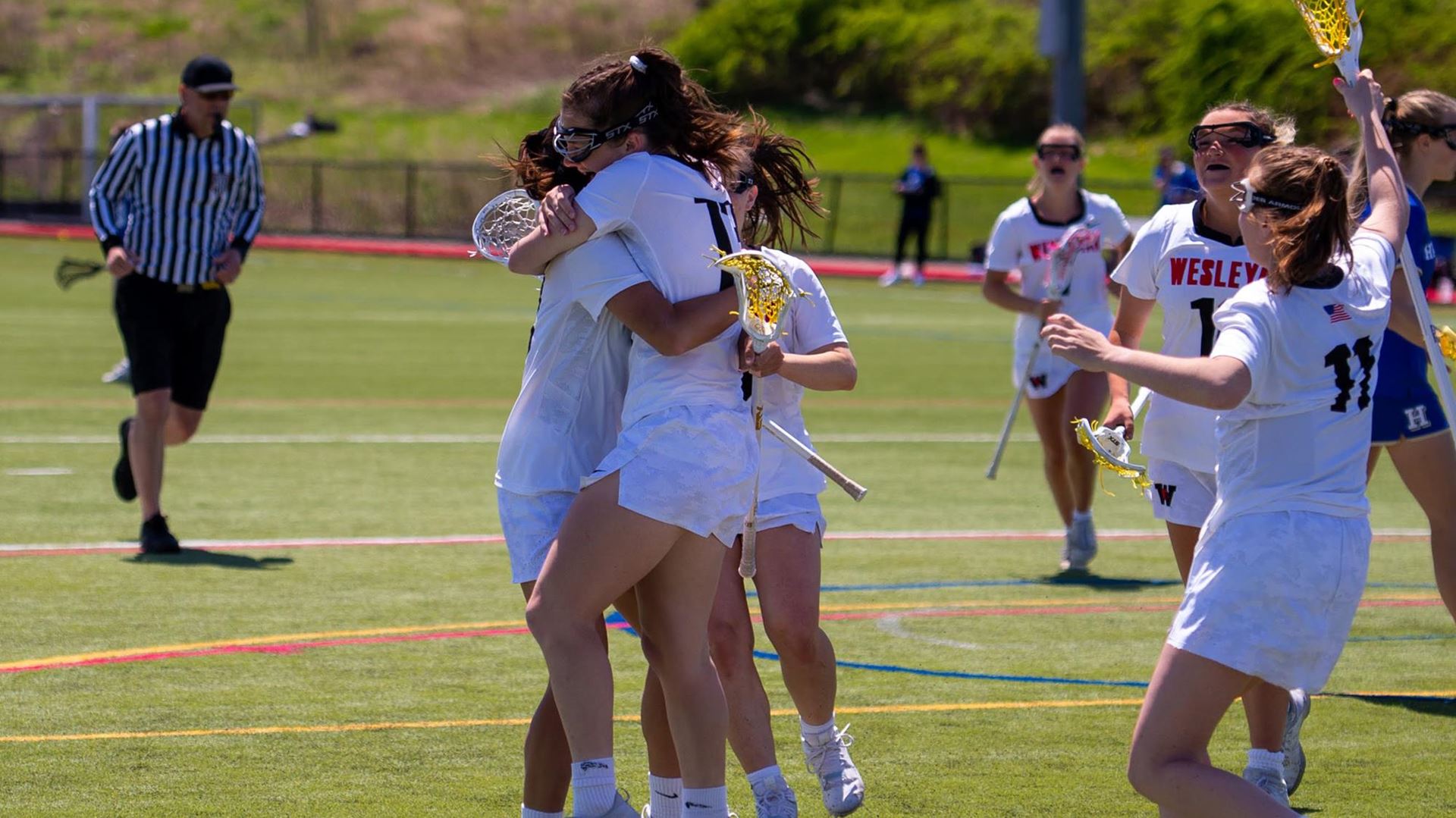 In the third quarter, the Wes side just couldn’t come up with the tying point as Hamilton answered every Cards goal with one of their own, keeping their lead at two going into the fourth. But, the momentum shifted in the fourth as the Cardinals went from struggling to find their usual dynamic rhythm on the offensive half to easily outclassing Hamilton’s defense. After Horst and Molly Greer ’24 each finished a free position, the game was tied with 11:36 left on the clock.

The next ten minutes were a battle, with each team aware that whoever scored next would likely seal the win and move on to the next round. The eventual go-ahead goal came with just over a minute left when Horst beat her initial defender at the perimeter, passed the next one due to a miscommunication or a short-but-fateful lapse of judgement, and cut laterally across to the front of the net to finish off her hat trick, giving Wesleyan the game-winning goal. With little time left, Wesleyan ran around the field in what was a short yet easy game of keep away until Greer found Chessy Greenwald ’23 standing in front of Hamilton’s empty net to add an exclamation point with four seconds remaining. The goal was Greenwald’s second of the game.

The offensive player of the match was, without a doubt, Greer, who finished the game with four goals—her season high—keeping Wesleyan close at times when the team’s offense fell stagnant. Each goal came from her receiving the ball in the post, drawing contact and the foul from crashing Hamilton defenders, and finishing all four of her free position opportunities.

Moving onwards, the Cards will travel up to Vermont on Saturday, May 7 to take on No. 1 Middlebury College, who were a perfect 10–0 in the NESCAC and 16–0 on the season. As of now, Middlebury looks unstoppable, especially after their first round win of 20–2 against No. 18 Amherst. However, in the regular season, Wes had the chance to take down Middlebury up in Vermont when Wes held a 10–9 lead going into the fourth quarter and were even up 11–9 with eight minutes to go. But it all unraveled when Middlebury scored two goals within a minute of each other and then hit the final one with two minutes left. The match was by far the closest a team came to beating Middlebury this year, so not all hope is lost.

To win, Wes will need to rely on their defense, as Middlebury can score rapidly. Coach Kim Williams will be looking towards her leading defender Indigo Pellegrini de Paur ’21 MA ’22 and senior defender Francesca Li ’22 to pester Middlebury attackers, making sure they cannot get comfortable in front of the Card’s net. Additionally, Wes will need to produce better offensive consistency throughout the game than they did against Hamilton, which will be crucial to boost morale when facing off with Middlebury.

For those who are not traveling the many hours up to Vermont during reading period (we applaud anyone who does), the game will be live-streamed through links given by both Wesleyan’s and Middlebury’s athletic websites. Tune in to see if Wesleyan can make the NESCAC Championship for the second year in a row.