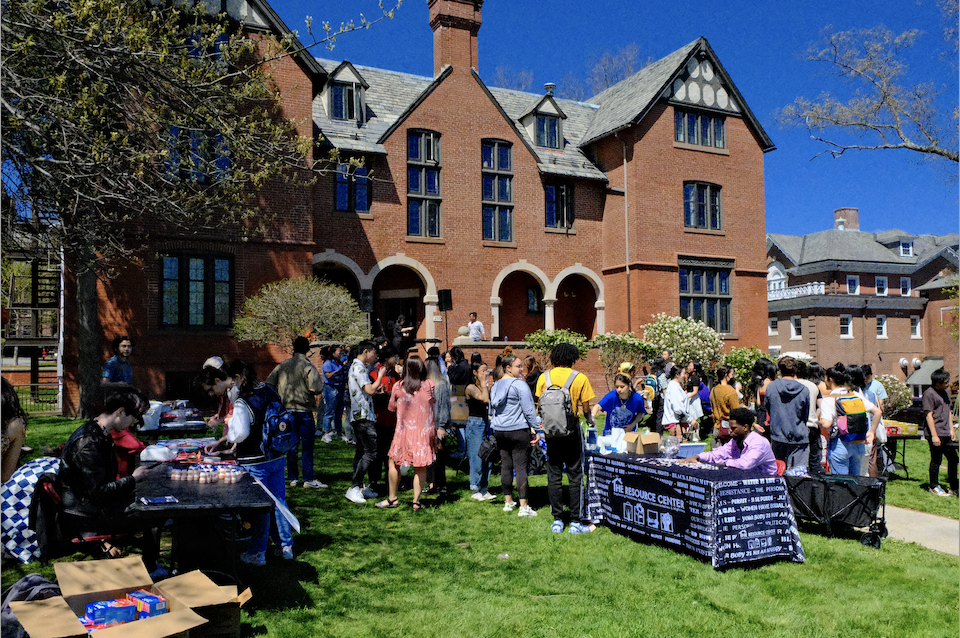 The Pan-Asian Market, held on Saturday, April 30 from 12 p.m. to 3 p.m. outside 200 Church St., marked one of the concluding events of the University’s month-long celebration of Asian American and Pacific Islander (AAPI) Heritage Month. The market, coordinated by the Asian American Student Collective (AASC), featured an open mic and tables for the AASC, Chinese Culture Club (CCC), Korean Student Association (KSA), Pinoy, Freeman Asian Scholars Association (FASA), the Asian American Studies Working Group, and the Resource Center (RC). The various student groups that contributed to organizing the market came together to celebrate Asian and Asian-American culture on campus.

Each group had its own table for interacting with attendees through various culinary, musical, and educational items, each of which was tailored to the group’s specific identity or goals. According to AASC Co-Chair Emily Jackson ’23, the sharing of cultures, especially through food, helped tie the event to the month’s theme of “Next GenerAsian.”

“Various Asian heritage clubs as well as culturally associated clubs were able to choose what they wanted to present at their table and how to represent themselves,” Jackson wrote. “Many clubs chose to sell traditional foods from their culture which connects to the idea of carrying on tradition from the past. This event also felt like a big celebration of present Asian culture and how far we have come as a collective on this campus.”

According to AASC Co-Chair and Internal Vice President of KSA Chaiyeon Lee ’22, the Pan-Asian Market provided various fundraising opportunities for student organizations, allowing the event to contribute to the “Next GenerAsian” theme and create financial stability for the group moving forward.

“It gives student organizations the chance to raise money because it’s really hard for student affinity groups to get money from the school, unlike a lot of other student organizations on campus,” Lee said. “A lot of the things that student affinity groups do are considered ‘socializing,’ and it’s community building, so it’s not legitimate enough to request funds from the school…so then this is a good fundraising opportunity for the student groups.”

AASC raised money at the Market by selling Yakult, a common probiotic drink created in Japan. Additionally, AASC provided paper and instructions for attendees to fold origami. Jackson, who contributed to coordinating for AAPI Month as an AASC Co-Chair, explained that having a table at the market allowed AASC to create a celebratory atmosphere.

“I have so much love for AASC, it made me so happy to be able to see collective members come to our table, feeling proud to be a part of the community, but it was also so fun to see new faces wanting to learn about who we were,” Jackson wrote. “I have been working with many different club leaders throughout the month, and it was great to finally interact in a less formal setting and see what everyone had to offer.”

Like AASC, the KSA table also offered food and interactive activities. The KSA sold both homemade culinary items, including triangular kimbap, and introduced attendees to well-known Korean activities, like the game of gonggi. According to KSA Financial Manager Jeremy Kim ’23, the table was intentionally set up to promote Korean culture in a fun, lighthearted environment.

“I think food is a great way to show people culture in an easy and accessible way,” Kim said.

“I’m very happy that we’re here,” Velez said. “Our club has been kind of quiet, and we sort of are coming out, rising from our ashes. Lumpia is, for American Filipinos as well, a food that…everyone knows.”

The FASA table also featured a number of culinary items that the group prepared in the kitchen of 200 Church St., including budae jjigae, which is known as Korean army stew. In addition to highlighting the diversity of FASA itself, the group’s members emphasized that the market allowed them to introduce people from all backgrounds to other cultures.

“As an Asian I feel like these sorts of events bring together the Asian and Asian-American communities here at Wesleyan…but also there’s a lot of people who come here and are from other backgrounds, so this is a good opportunity…to introduce a lot of our cultures and a lot of our dishes as well to let [people] try,” Aaron Leong ’25, who tabled for FASA, said.

“We’re kind of just starting this group and we’re building off of legacy and decades of activism that already existed,” Emily Chen ’23, who tabled for the Asian American Studies Working Group, said.

The RC offered a number of items at its table, such as shaved ice and activist pins celebrating Asian pride. Additionally, the RC hosted a Person of Color Ice Cream Social event across the street at 167 High St., offering free ice cream to students of color. Through these two events, the RC furthered its goal of supporting students of all backgrounds.

“I’ve worked with the Resource Center since my freshman year, and so I know firsthand just how active the center is in supporting underrepresented and marginalized groups,” RC Office Manager Brianna Mebane ’22 said. “I think that it’s great that the Asian students on campus have opened a Pan-Asian Market both for representation and also to show the wide range of offerings they have to give to people, and I’m really glad there is such a great turnout.”

The CCC sold a variety of items at their table, including bubble tea, symbols common in the Beijing opera, and stickers with zodiac signs. Yiwen Huang ’24, who tabled for CCC, shared similar sentiments with other tablers, highlighting the importance of the event in fostering student involvement and emphasized the importance of the market in introducing audiences to Asian cultures in a variety of ways.

“We have concrete and specific ways for students to enter a specific culture,” Huang said. “It is hard to express and involve more people considering the big topics out there, but this is just a relaxing way [to do so]. Sharing your cultural senses in a multisensory way—taste, voice, sounds—and how those things, those dimensions, reintroduce each other and harmonize with each other. I think it’s a really beautiful event.”

The Pan-Asian Market also included an open mic, featuring an array of student performers who exhibited artistry ranging from music to poetry.

“It’s really fun to perform,” Quentin Tan ’22, who performed in a band at the open mic, said. “We knew this was a thing and it’s really nice getting in front of an Asian audience, because otherwise you might not know whether the audience gets it…it’s nice having that familiarity.”

Jackson is excited to build on and learn from the successes of the market, including the work that went into it.

“Going into next year, I want to keep up this communication with other clubs and collaborate more, even outside of the month of April,” Jackson wrote. “I am so proud of all the work that the board members have put in and I am looking forward to continuing working with such fun, positive, and energetic energy.”

Overall, many Asian and Asian-American students and student organizers were glad to see the market bring the Asian community on campus together, particularly within the wider month of programming.

“I’m really glad that we decided to have a full month, move it forward towards April, just because I feel like although we’re not a big part of campus, the Asian community here is very lively and robust, and I’m just glad that seeing everyone so passionate and so many people attend here puts a smile on my face,” Andrew Cao ’23, a member of the AASC Outreach Subcommittee, said. “It’s just nice to see my culture celebrated.”