WesCeleb: Elizabeth “Neff” Nefferdorf ’22 Has the Energy of a Small Pomeranian 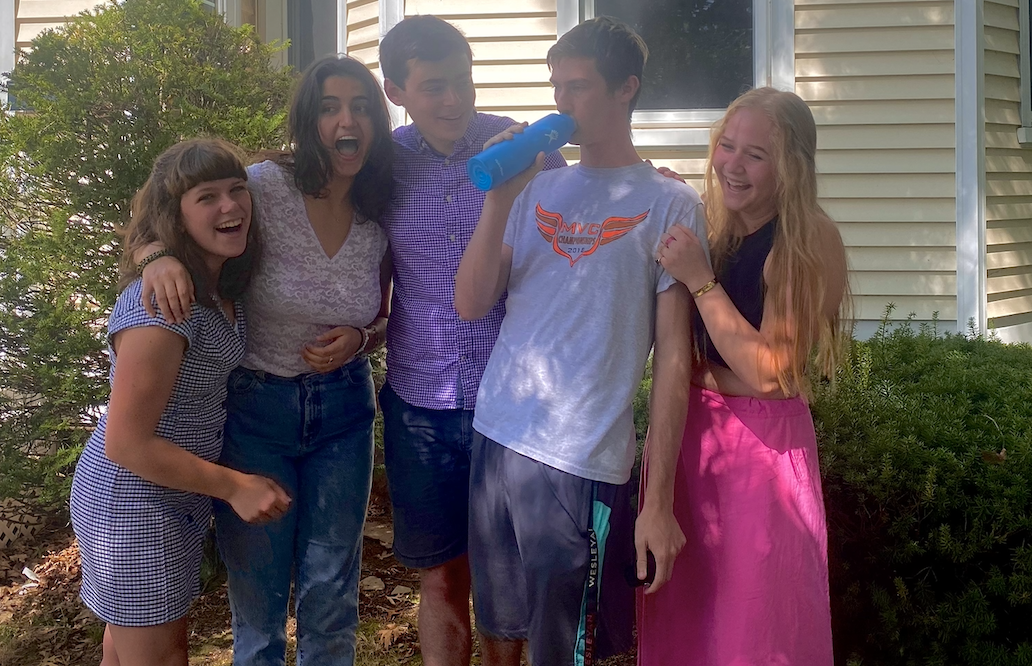 From introducing “The Dance Game” as a House Manager for the Alpha Delta Phi Society to drinking several shots of espresso to make her coworkers laugh at Pi Cafe, Elizabeth “Neff” Nefferdorf ’22, will do anything to bring joy to the spaces she loves on campus. Dressed head to toe in pink, Neff sat down with The Argus to talk about her theater capstone project, exploring the healing power of comedy, and the importance of authenticity in lasting friendships. Her show, called “Daddy Issues,” will be performed on April 7 and 9 at 8 p.m. in the Patricelli ’92 Theater.

A: How did you become Neff?

EN: In high school I went to my theater class and my teacher was calling roll and was like, “‘Nefferdorf.’ That is such an interesting name. I’m never going to call you ‘Elizabeth.’” I have the energy of a small Pomeranian, so they wanted to make it more apt. Neff floated around and then it just stuck.

The theater kids always called me Neff in high school, but everybody else still called me Elizabeth. When I came here—this is so embarrassing—I was going to try to be Elle, like “Legally Blonde”—I say, wearing all pink and being me. I told my roommate at the time, and they said Elle doesn’t seem to fit. That broke my heart, but everybody loved Neff.

A: What else are you involved in?

EN: Theater, theater, and more theater. I’m also in the Alpha Delta Phi Society. One part of my life that I [also] like to make a whole big part of my personality is being a barista. I work at Pi, and I worked at Starbucks, and probably will continue.

A: What do you feel like are the character traits of a barista?

EN: You gotta be a little bit of a bitch. You just have to have high energy in a really aggressive way. There’s nothing worse than working with somebody behind the counter who’s just like, “This is la-di-da meadow time.” No, this is a high-stress environment. They will come behind this counter and punch us in the face if we get their drink wrong or it takes five minutes too long.

A: What’s the most aggressive experience you’ve had as a barista?

EN: Something that happens all the time is people will come up to the side where you can enter the counter and just stare you down as you make the drink. And that only motivates me to make the drink slower.

A: What have you been involved in with theater?

EN: I’ve been in quite a few little plays. One of my favorites was, “Eons,” which was a friend of mine’s playwriting thesis when I was a freshman. It was a three-woman show. It was my first all-female cast, the biggest role I had probably ever had.

I love the way student work is just a constant here. We’re not just recycling or revamping things that have been done a million times.

Last semester, my friend was doing a directing thesis, “Heroes of the Fourth Turning,” which was a very scary, intimidating play. I got an overwhelming role—it was a character that [reminded me of] people that I know from home in Virginia, this very staunch, conservative, raised-in-the-church sort of person. I was a little scared, but it was actually quite cathartic.

Right now I’m working on a theater capstone with my bestie, Keith Jones ’22. It’s an original comedy show. There’s sketch comedy, there’s some stand-up, there’s a musical number too. It’s called “Daddy Issues.” I don’t really know what I’m doing after graduation, but doing this has made it seem like comedy could be an option.

A: Do you have a favorite class or professor?

EN: My favorite class has to be “Classical Allusions in Film.” It convinced me to study classics here. I’ve now taken six courses with that professor, [Visiting Assistant Professor of Classical Studies Serena Witzke]. She is just such a badass. She knows how to level with people who might not have classical knowledge and engage them in the conversation too.

A: Do you find that classics and theater intersect?

EN: All the time. My freshman fall, I was taking “Special Topics in Theater History” and then “Classical Allusions in Film,” and we would be talking about “Antigone” in both. It’s not just that sometimes we talk about classical Greek and Roman plays in theater classes, but the themes carry through.

A: Did you have any exposure to classics before “Classical Allusions”?

EN: Just high school Latin. I was a big old Latin nerd in high school. And then I was convinced that I was done with it. I did take Italian here for a year, and I liked the class, but I kept writing Latin words instead of Italian words. Then I was taking Latin and Ancient Greek at the same time, my brain just couldn’t handle it.

A: What do you think of ADP?

EN: It gave me a really nice sense of community. I tried to put myself in roles where I could work on teams and support my friends. I was a House Manager for two years, and it just felt nice to be taking care of a space that was for me and my siblings.

A: Do you have any tips for creating a fun space?

EN: It’s all about knowing the people there. Sometimes I would just text in the house group chat last year like, “I’m gonna be playing the dancing game with some people and have some hot cocoa. Join if you want.” Spontaneous stuff. Candy canes for the holidays and whatnot. If people were telling me that they liked Laffy Taffy, next time I would go on a house run, boom, big bowl of Laffy Taffy in the foyer.

A: Do you want to explain what the dancing game is?

EN: It’s just a call and response game where everybody has a two-beat dance move that is their identity. It can be really high-energy, and gets people moving. I always wanted to do karaoke because I’m a theater kid.

A: Do you have any advice for your first-year self?

EN: When I came in as a freshman, I was expecting to be one kind of person. And I was trying to mold myself to be that person. I wasn’t happy here until I just let that go and was more honest with myself and others.

I really value being able to be my genuine self 100% of the time. I came in stifling myself and holding back my thoughts, feelings, emotions, everything. I would not have been able to get to this point if I couldn’t be honest with myself and my friends.

A: What’s happening after Wesleyan for you?

EN: Depending on if people like me going on stage [to talk] about my deceased father for an hour, I am thinking about trying to break into the comedy scene. But even if not, I might go for it and work on some more original work. One of my best friends, Caitlin Sergi ’22, and I are planning to move to New York together. We want to live together, get some day jobs, and do our 20s some justice.

After these past two years of chaotic nothingness, we want to celebrate and recognize how much we’ve achieved and share some time together. Some of my housemates will also theoretically be in the area, so hopefully I can torment them for a few more years.

A: All the pink. Is there a reason for that today, or just a pink day?

EN: If you look in my closet, there is not a whole lot else. My room is really, really pink. I just like to surround myself with happy things. Makes me feel like a princess, even though I’m like a pit bull of a person.

I have a lot of caffeine in me. I worked at Pi before this.

A: Do you just drink Pi the whole time you’re working?

EN: [On some shifts I’m like] “It’s time to take some shots!” but they’re very clearly espresso shots. Then I leave and I’m shaking, and then I think, “Why does my stomach hurt? Because you poured pure acid into it.” I will do anything if I think I’m going to get a laugh for it.

A: A lot of freshman friend groups do fall apart. How do you think yours ended up staying together?

EN: Part of this goes back to what I was saying about being your genuine self will bring you the most happiness. We were able to connect on a genuine level. Pretty early on in my college experience, my grandfather had passed away and then my friend from home passed, so I was going through a rough time my freshman fall and they really supported me throughout. I was in a place where I knew nobody. And we’ve known each other for two months but there they are at my door, making sure I’m eating and sleeping and asking if I want to do a movie night or go for a walk or go to the pond. Showing me so much compassion, even though they barely knew me. As the years went by they did the same thing, and I tried to do the same for them. That really cemented us together. I don’t know what I would do without them.

A: Do you think that will continue post-Wesleyan?

EN: I really do. I just can’t imagine waking up and not hearing from them for a whole day. I feel spoiled to live with them now and I know it won’t last forever, but I firmly believe that we will be friends till the end of time. It’s hard to think about somebody who was there for me, literally at the worst time in my life ever, not being there.

A: Do you feel like people take theater too seriously?

EN: Oh yeah. I think that’s one of my gripes with the theater scene here. People put too much pressure on things to be groundbreaking, when in reality, it’s about clarity of purpose. Me and Keith have a concrete purpose for our capstone. It’s really about bridging the conversations about grief into normalcy instead of leaving it in the taboo, when grief is a normal thing that people experience every day. Do I think that our work is just incredibly important, more important than any other work ever done on grief? No, I do not, but it has strong purpose.

When we had to justify to the theater department why we were going to do a sketch comedy show for a capstone, we were talking about the value of comedy. There’s just not a lot of comedy going on, and it’s because people don’t see the value in it, at least within the Wesleyan art scene.

Getting people to laugh can be so difficult, but also when done right, it says so much. With comedy that is darker or about traumatic things, if you can laugh through it, you are bringing light and humanity back to a moment that lacked it.

Anne Kiely can be reached at afkiely@wesleyan.edu.