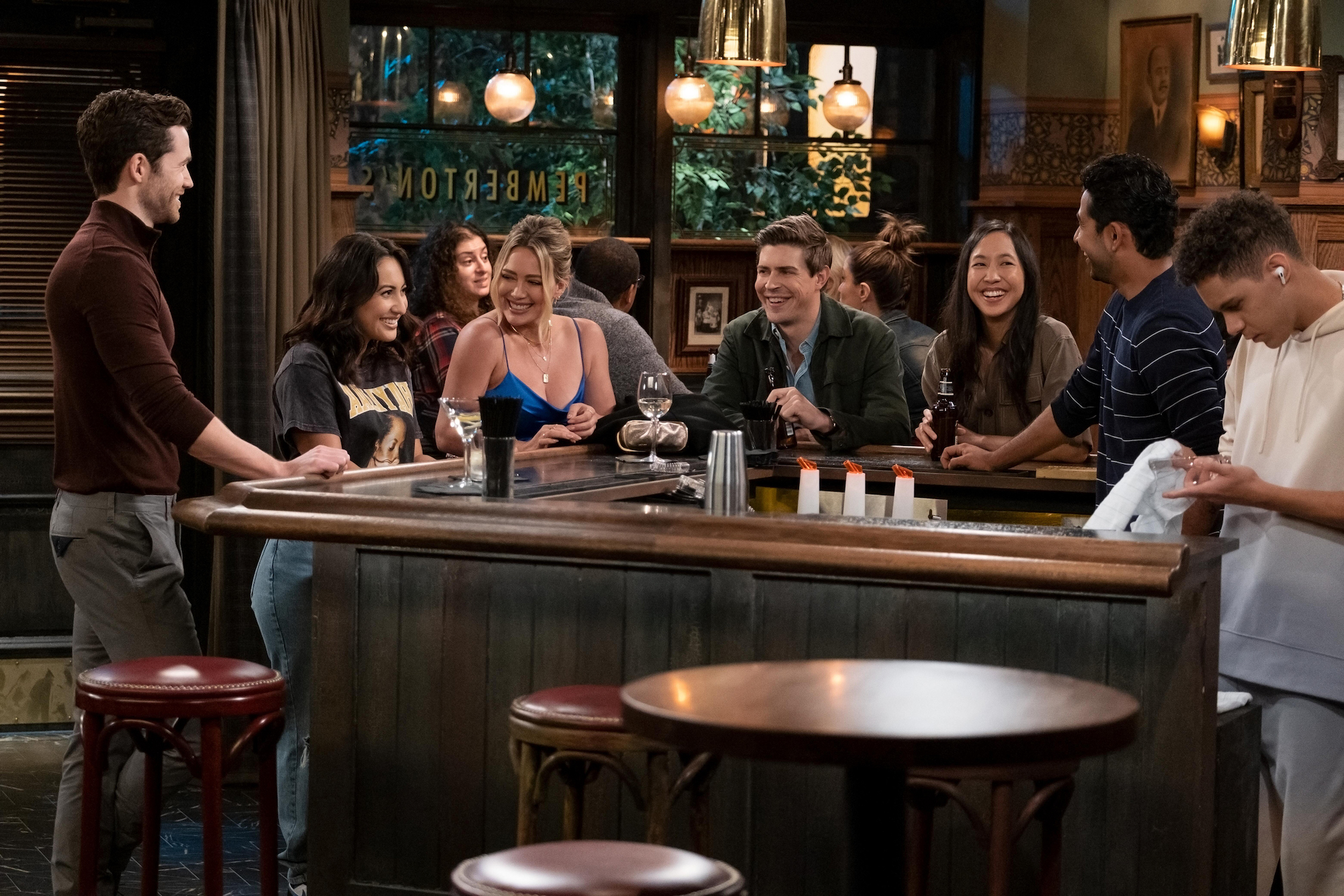 WARNING: This article contains spoilers for Season 1 of “How I Met Your Father.” Read at your own risk.

“Thanks! It was a total score. We got it from this old married couple who posted it on the Wesleyan alumni group. We even got them to leave their swords.”

“How I Met Your Father” takes place in the same universe and location (New York City) but with an entirely new cast. The show follows Sophie (Hilary Duff) as she navigates life in the city. She’s joined by her best friend Valentina (Francia Raisa) and Valentina’s new beau Charlie (Tom Ainsley). In the first episode, she meets Jesse (Chris Lowell), his roommate Sid (Suraj Sharma), and his sister Ellen (Tien Tran). The six become a friend group of sorts, and the first season details a few of their adventures narrated from the future by an older Sophie (Kim Cattrall).

I was already familiar with Duff through “Lizzie McGuire,” and Raisa (I hate to admit that I binged all of “Secret Life of the American Teenager”), but the rest of the cast was entirely new to me. I was pleasantly surprised by how much I liked each of the characters. Though some of them were similar to the original characters—Sophie is just as much a helpless romantic as Ted (Josh Radnor) and Sid is very Marshallesque—it is clear the show is trying to allow the new cast to grow on their own.

Another interesting twist is that future Sophie shares that the father was there the night of Sid’s engagement, opening up a realm of possibilities as to who he could be. Could it be Jesse? Sid? Charlie? Ian from Tinder? Vice-principal Drew? Someone who has yet to be revealed? Nothing’s for certain, which makes it ever the more intriguing.

Perhaps the biggest difference between the original and the newer series is the timing of it all. “How I Met Your Mother,” which aired from 2005 to 2014, has been criticized for its outdated, offensive, and oftentimes misogynistic jokes, especially when it comes to Barney (Neil Patrick Harris). Rewatching it, it’s hard to not cringe and remind yourself that some lines would never have made it past the first draft if the show were made in 2022.

But the new series is clearly made recently, and not just because it doesn’t have crude jokes (or at least, as many). The plot is set in the modern day, complete with references to Tinder, TikTok, and even Lin-Manuel Miranda ’02. The sheer modernity of the show makes it much easier to watch, especially when certain plotlines are somewhat believable. That’s not to say the whole thing is realistic, but bits like Valentina finding Sophie’s fling’s ex on Instagram in a matter of minutes is reminiscent of something I would do. (Who am I kidding, I have done that.)

There are also some key callbacks to “How I Met Your Mother.” The show’s theme song is a slowed-down version of the original. As mentioned previously, at the end of the pilot, Jesse and Sid bring back the group to their apartment. The old couple they inherited it from is presumably Lilly and Marshall (Jason Segel), and the swords are from earlier seasons of the show. This was completely unexpected, as the show had marketed itself as a standalone spin-off, but was such a clever way to connect the show back to the original and made it more enticing. Throughout the season, I found myself keeping an eye out for other references, and was excited to find one in almost every episode. Whether it was Jesse introducing Ellen with a “Have you met Ellen” (a clear reference to Barney’s “Have You Met Ted”), Sophie taking to a roof to get a break (a classic Ted Mosby move), or the random scenes of the Captain and Becky (recurring characters from HIMYM), each little bit warmed my “How I Met Your Mother”-obsessed heart.

It’s clear they saved the best callback, or rather, cameo, for last. In the final episode, after Jesse blurts out that he loves her, Sophie goes downstairs to MacLaren’s (the bar where the original gang spent a lot of time) to get a drink. There, we see two familiar faces: Carl the bartender (Joe Nieves), and Robin (Cobie Smulders). Sophie tells Robin about her current situation, and Robin imparts to her some words of wisdom, having experienced something similar herself with Ted. Although she never mentions him or the gang, she talks of the past and her group of friends longingly in a way that brought me to tears.

The series ends on a cliffhanger, as Jesse gets back together with his ex-girlfriend, Valentina and Charlie break up, and Sophie reunites with a Tinder fling from the beginning of the episode. Season 2 will have a lot of questions to answer, whenever it airs. It will also have a lot more time to expand on the characters more: something that the creators say wasn’t possible with the ten-episode first season.

I’m excited to see the characters grow throughout the show, as “How I Met Your Father” is enjoyable on its own. But the connection to the original, and the nostalgia it invokes, is what makes it even better, especially for a fan like myself. By bringing Robin in, the show has opened the door of opportunity for other callbacks, connections, and cameos. The legendary legacy of “How I Met Your Mother” lives on.