University Community Comes Together in Support of Ukraine

Over 200 students, faculty, staff, and community members gathered outside of Usdan University Center on Friday, March 4 for the “Wesleyan Stands with Ukraine” rally. The rally, organized by Ukrainian, Belarusian, and Russian students at the University, sought to show solidarity with the people of Ukraine as they face an invasion by the Russian Federation under the orders of Russian President Vladimir Putin. 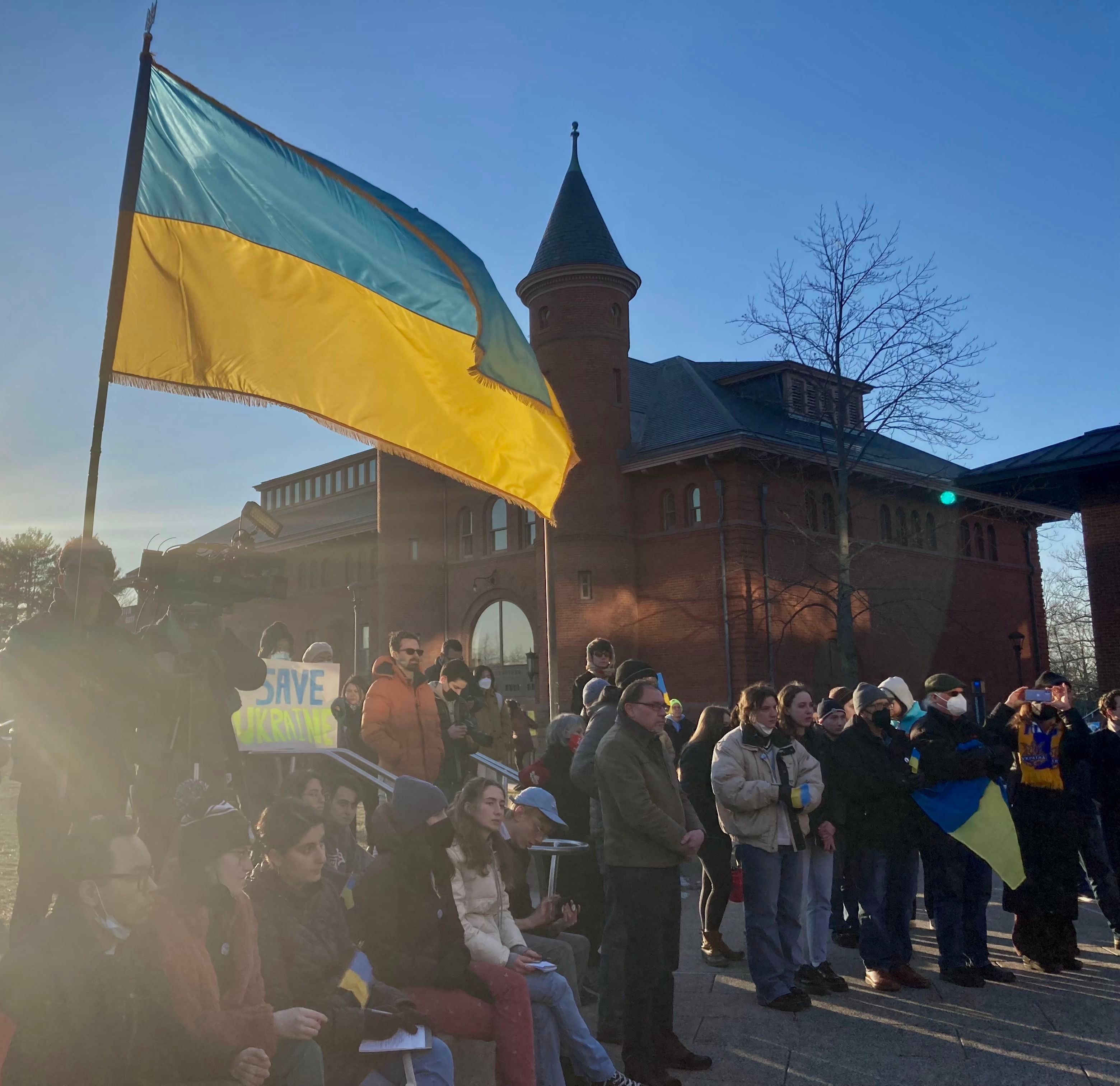 “We just randomly ran into each other on Sunday [Feb. 27] and I was like, ‘Hey guys, maybe we can do the rally?’” Svirydzenka said. “And everyone was just like, ‘Yeah, this is such a good idea!’ And on the next day, Julia had already contacted everyone, she was like, ‘People are really supporting us, let’s do this.’”

Beliauski outlined that the primary goal of the rally was to spread awareness and show support for Ukrainian citizens, as he has seen similar methods effectively used before.

“I just want people in Ukraine to know that the people here and everywhere in the world support them,” Beliauski said. “Even when there were protests in Belarus in 2020, the fact that people were protesting in other countries and just posting a lot of stuff on the internet about the situation really helped to spread awareness or…motivate people to do something. It’s the same situation here too, with Ukraine, in terms of just raising awareness.”

Both Svirydzenka and Beliauski are Belarusian students, and Kulchytska is Ukrainian. The group wanted the rally to focus on how the conflict impacted the lives of those residing in the involved countries, including Ukraine, Russia, and Belarus.

“The most important thing about the event is to just raise awareness and also tell people how they can help people in Ukraine,” Beliauski said.

After receiving a great deal of support from faculty and staff to publicize the event, a crowd gathered outside of Usdan beneath a Ukrainian flag. Despite the cold weather, several speakers passed on powerful messages of hope and calls to act.

The rally opened with a word from Director of Religious and Spiritual Life and University Jewish Chaplain David Leipziger Teva, who read aloud the poem “The Diameter Of The Bomb” by Yehuda Amichai. Then, he spoke on the historical and social significance of the invasion of Ukraine.

“In my mind, the horrors of the Holocaust, of the Shoah, and of World War II, meant that the borders of Europe were fixed and permanent,” Teva said. “Boy, was I wrong. Putin has unleashed a war, and what we are witnessing are not only war crimes: we are witnessing the blueprints of a genocide.”

Teva urged the audience to help the Ukrainian cause in any way possible and asked the crowd to provide written, financial, or emotional support to those affected.

“I want you to conjure up your strength, your humanity, your compassion,” Teva said. “I want you to find that within you. And then when you find it within you, I’d like you to send that compassion, that humanity, to the wounded of Kyiv, to the displaced of Kharkov, and to the millions of refugees now in Poland and throughout Europe.”

Teva then led the crowd in a minute of silence and asked people to link arms.

Following Teva’s words to the crowd, Kulchytska took the stage and spoke about her experience as a Ukrainian student living on campus during the invasion.

Kulchytska also evoked the conflict’s toll on the psyche of the Ukrainian people and their perseverance in fending off the Russian invasion. 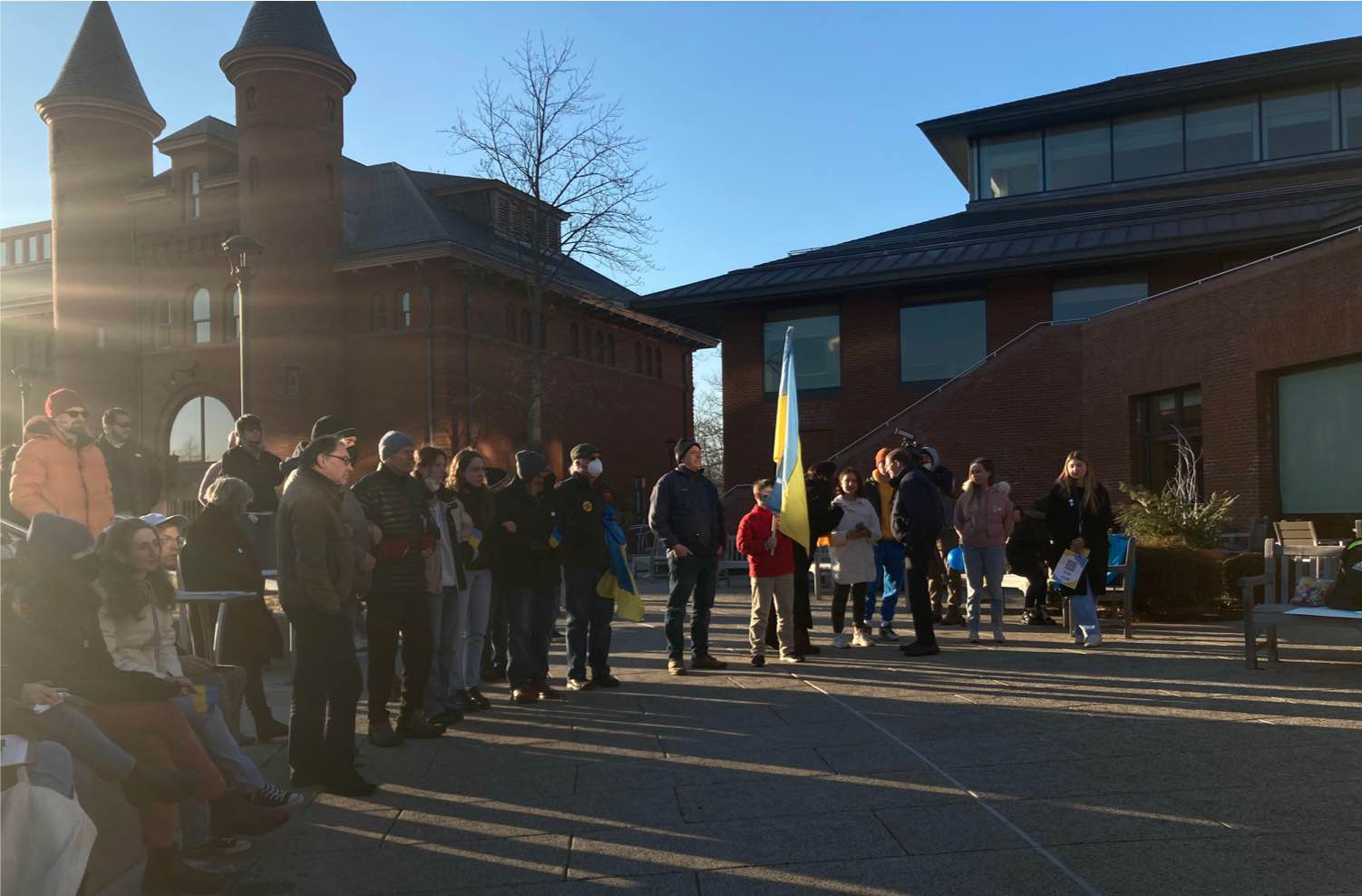 Kulchytska explained that the emotional and physical toll of the situation cannot be measured. As a Ukrainian living abroad, she expressed horror at the atrocities of the Russian army and government.

“It feels like 1984 for Russia,” Kulchytska said. “It feels like 1939 for Ukraine…. I’m feeling an extreme sense of helplessness. But I still feel like I should do something. And you guys also should do that.”

Kulchytska urged the crowd to donate to the cause.

U.S. Senator Richard Blumenthal then stepped up to the microphone. He applauded the bravery of the Ukrainian people and urged his fellow legislators to level even tougher sanctions onto the Russian Federation.

“This country should impose even stronger sanctions,” Blumenthal said. “We’ve done some, they’re good, but we can go after the other banks, we can go after secondary sanctions, we can impose a ban on imports of Russian oil and gas. There’s far more.”

Blumenthal also called for new sanctions to go after Putin’s personal assets abroad, and applauded the crowd for coming out and showing support.

The audience then heard from multiple faculty members from the Russian, East European, and Eurasian Studies (REES) Department, including Assistant Professor of the Practice Natasha Karageorgos, Assistant Professor Roman Utkin, Professor Peter Rutland, and Associate Professor Katja Kolcio, who is also the Director of the Albritton Center for the Study of Public Life.

“This is what Ukrainians are fighting for and giving their lives up for,” Kolcio said. “Whether you stand for Ukraine or you stand for the principles that are dearest to your heart, just stand because you matter.”

In addition, Svirydzenka and Beliauski spoke in solidarity with Ukraine. They touched on the effect of President of Belarus Alexander Lukashenko’s regime and alliance with Putin’s government.

“I want to apologize for my government and for the government of Russia for doing this for this world,” Svirydzenka said. “But I also want you to know that not all Russians and not all Belarusians support Lukashenko…. I’m proud of the people of Belarus who are protesting right now because I know how scary it can be.”

Beliauski, who has been protesting the Lukashenko regime since 2020, also spoke to the hardships that the people of Belarus and Russia face and how Putin and Lukashenko’s dictatorships have destroyed everyday life.

“Children that are hiding in bunkers, and citizens are getting married on the day when the war started and they fight together, and I just admire the people of Ukraine,” Beliauski said. “And I also admire people of Belarus and Russia who did not stand with Putin. Who choose to go against the regime.”

The last speaker was Tim White ’23, who emphasized the importance of standing up against disinformation and understanding the impossible situation of the Russian, Ukrainian, and Belarusian populace.

“The propaganda machine in Russia is strong,” White said. “I have lost count of independent media that have gone from foreign agent status to outright banned. Radio stations that were not conforming to the Putin regime narrative have been closed. TV stations also closed. There is no media apart from a handful of Telegram channels that are still operating because Telegram has yet to be banned.”

White concluded by urging the crowd to take action, even just by spreading information about the situation.

“It has been a wild experience…being on campus and then talking to friends and family back home every day,” White said. “It feels like they are two different planets that have no community. I urge you to speak up, even if it’s a stupid infographic. The visibility of people recognizing what is going on does make a difference.”

The rally concluded with a march around College Row and cries for peace echoing across the lawn.

Anybody who wishes to donate can send funds to Kulchytska’s Venmo, @Kulchytska.