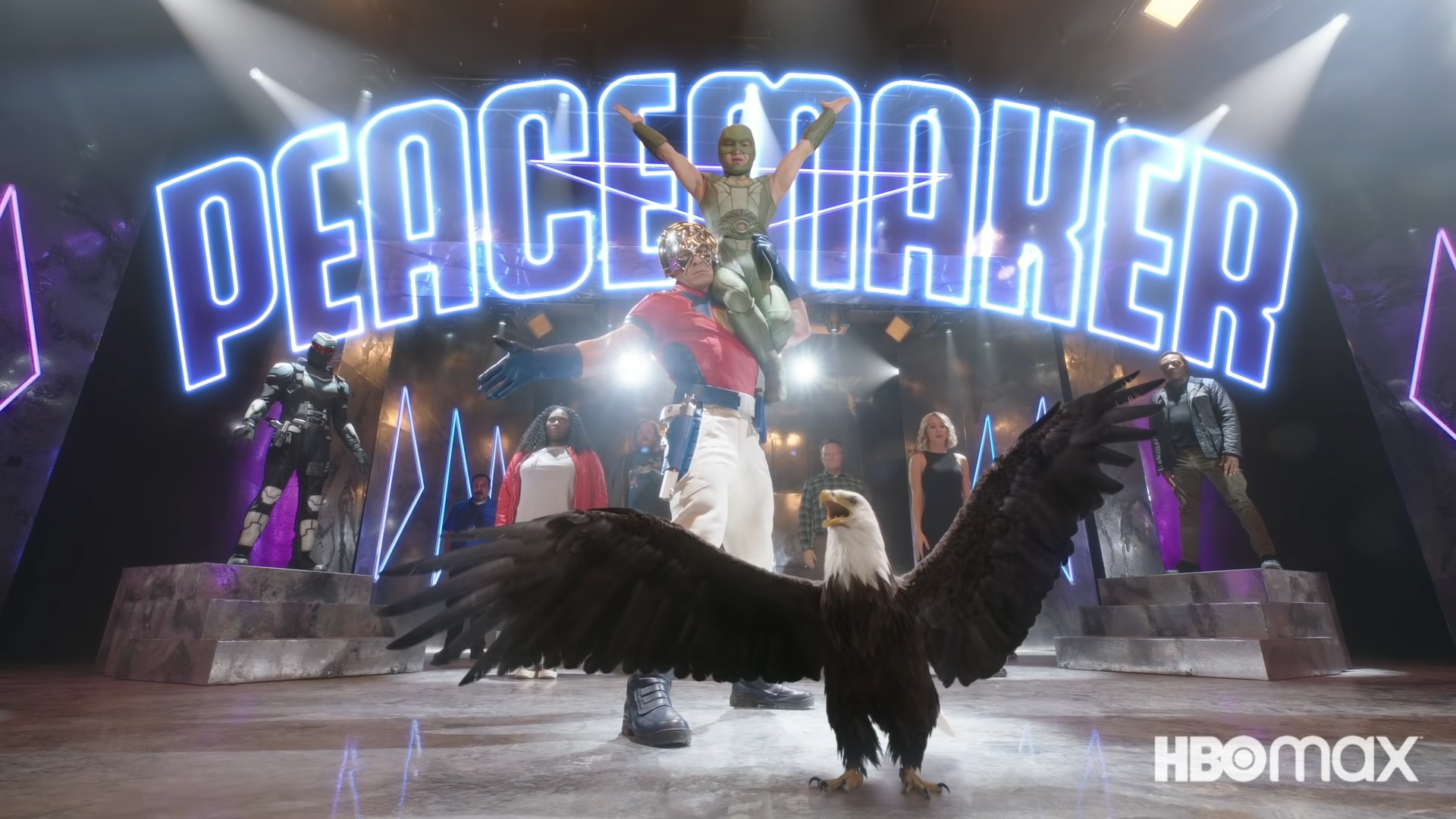 Writer/director James Gunn might just be the most distinctive voice in superhero cinema today. Coming to prominence with the “Guardians of the Galaxy” movies, Gunn has since branched out to the DC Universe, helming last year’s tragically underrated sequel-reboot, “The Suicide Squad.” Now, with a “The Suicide Squad” spinoff, “Peacemaker,” whose first season is now streaming on HBO Max, Gunn has further refined his signature style with a tightly crafted show that brings everything from gross-out violence to touching emotional moments. If all that doesn’t sound enticing enough, “Peacemaker” also features a genuinely hypnotic and joyous opening credits sequence: a neon-lit hair metal-backed dance number that I never once considered skipping.

When we first meet Chris Smith (John Cena), alias Peacemaker, in “The Suicide Squad,” he is the closest the titular team of mercenary supervillains has to a true bad guy. A simple-minded, blindly jingoistic government killer, he carries himself in a manner Cena described in an interview with Den of Geek as a “bro-y, douchey Captain America.” His ethos is best captured in a quote he delivers to his teammates early on in the film:

“I cherish peace with all my heart. I don’t care how many men, women, and children I need to kill to get it.”

At a secret government base in the fictional nation of Corto Maltese, the squad uncovers evidence of horrific human experimentation carried out by the nation’s American-backed government. Team leader Rick Flag (Joel Kinnaman) insists on making the records public, but Smith, blindly following the orders of his superiors, insists on carrying forward with destroying the base, completing their mission, and leaving, ignoring the threat that the alien monster contained in the base poses to the nearby city. As the team turns against him, Smith kills Flag, whose last words echo in Smith’s head:

“Peacemaker. What a joke.”

As the surviving members of the squad abandon their mission, choosing instead to protect civilians, Smith is left for dead in the base’s rubble. “Peacemaker” picks up just weeks later, as he recovers in a hospital, haunted by his actions and considering turning over a new leaf, just as he’s recruited for another top-secret mission by the organization A.R.G.U.S. (no relation to this publication), hunting down body-snatching aliens known as “butterflies.”

On the mission, he’s joined not by another Suicide Squad team of supervillains but comparatively ordinary government operatives: Leota Adebayo (Danielle Brooks), a seemingly average woman thrust into the world of superheroes and alien invasions; Clemson Murn (Chukwudi Iwuji), a quiet mercenary with a mysterious past that proves integral to the team’s task; Emilia Harcourt (Jennifer Holland), a snarky, hard-nosed A.R.G.U.S. agent; and John Economos (Steve Agee), an insecure tech whiz whose dark dyed beard becomes the target of Smith’s mockery.

Rounding out the supporting cast are Sophie Song (Annie Chang), a small-town police detective who finds herself on Smith’s tail, and Judomaster (Nhut Le), a martial arts master with a Napoleon complex and a penchant for Flamin’ Hot Cheetos who seems to have little agenda beyond popping up periodically to incite chaos. Tagging along on Smith’s mission is Adrian Chase (Freddie Stroma), alias Vigilante, a good-natured psychopath whose mission to wipe out crime with lethal force brings him to consider Smith his best friend, even if the feeling isn’t mutual.

As this motley crew seeks to infiltrate and dismantle the butterflies’ apparent plans for world domination, personalities quickly clash, and Gunn’s talent for writing vulgar humor is fully showcased in the back-and-forth banter. But alongside the jokes comes a genuine internal conflict: A.R.G.U.S. wants Smith to be the order-following killer he’s always been, but the events of “The Suicide Squad” have set him on a new path. Smith begins to cherish the friends he’s making, questioning whether he wants to pursue his old ethos of peace at any cost. Cena flexes his acting chops as Smith confronts toxic masculinity and his traumatic past.

Grappling with his upbringing leads Smith back to his father, August “Auggie” Smith (Robert Patrick). Auggie, we learn, was responsible for the harsh, abusive upbringing that molded his son into a killing machine. What’s more, he has a secret identity of his own: White Dragon, a white supremacist supervillain with a high-tech suit that’s half Iron Man, half Klansman. The father-son conflict here begins as tense psychological warfare but soon escalates as the explosions move from metaphorical to physical.

What sets “Peacemaker” a cut above so much other superhero media is its blend of humor and heart. The show has plenty of absurd moments: Smith recites a list of filthy anecdotes about superheroes he claims to have met, Chase starts a fight with a gang of white supremacists by asking them to volunteer their favorite contributions by African Americans to popular culture, and Economos fights a butterfly-possessed gorilla while wielding a chainsaw. Yet its characters also face sincere emotional stakes, conflict, and development. One episode’s muted conclusion, where Smith softly plays piano alone as he remembers his childhood while his enemies close in, is particularly moving.

Another thing that makes “Peacemaker” stand out is how genuinely self-contained it is. While many of Marvel’s streaming shows on Disney+ are well-made, their quality is often undermined by a devotion to the overall Marvel Cinematic Universe. The creativity of “WandaVision” ends on a cliffhanger to tease “Doctor Strange in the Multiverse of Madness.” “The Falcon and the Winter Soldier” serves less as a story unto itself and more as a prologue to the next “Captain America” movie. By contrast, “Peacemaker” tells a complete story from beginning to end, with a truly defined arc and emotional resolution for its protagonist. Sure, another season has been greenlit, but the first season could easily stand on its own. Even a cameo in the final episode by the Justice League, featuring quips from Aquaman (Jason Momoa) and the Flash (Ezra Miller) doesn’t tease those characters’ upcoming movies: it’s just another detail to fill out the “Peacemaker” world.

In many ways, “Peacemaker” feels like the culmination of Gunn’s career thus far, blending the vulgarity and violence of his early work with the emotionally earnest superheroics of his Marvel work. Rather than being tonally inconsistent, the tragedy and comedy build on and feed into one another, coming together into a whole that’s hilarious, action-packed, and emotionally satisfying.