The City of Middletown hosted a second community workshop via Zoom at 6:30 p.m. on Tuesday, Jan. 11 to discuss updated plans for the Return to the Riverbend campaign and receive community input. This workshop followed the first community meeting in Oct. 2021, during which the City heard general goals for the riverfront area, which the planning team have since turned into initial design concepts for the master plan.

Over 110 participants attended the workshop, most of whom were Middletown residents. 14% of the attendees identified as community leaders, nine percent as business owners, six percent as students, and six percent as city staff. As in the first community workshop, the presentation team included consultants from Cooper Robertson, the City’s lead consultant for the riverfront design, team members from Karp Strategies, a consulting firm specializing in economic development, and Langan, a Connecticut-based engineering firm. 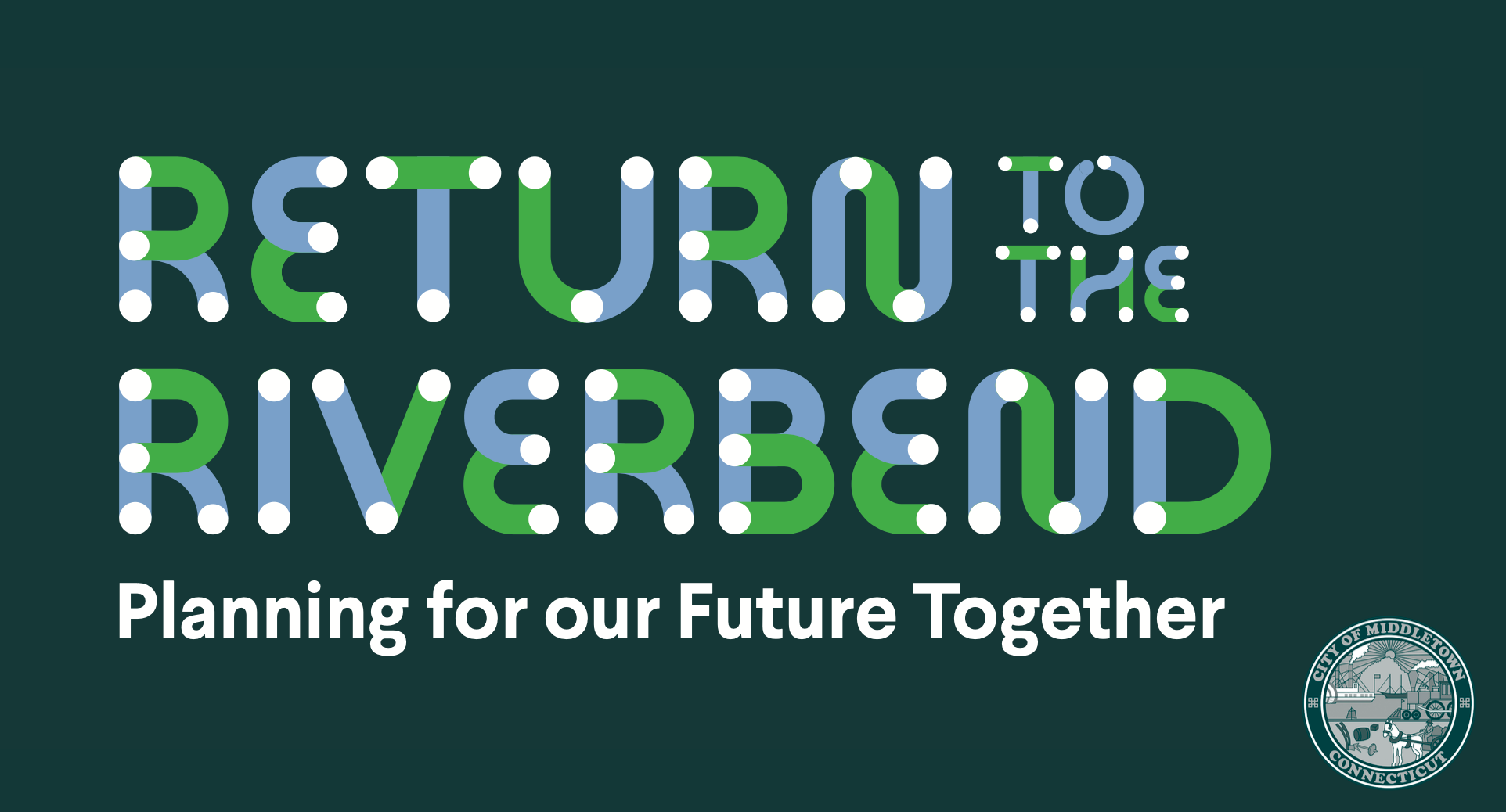 Karp Strategies consultant Alan Patterson opened the meeting before introducing Middletown Mayor Ben Florsheim ’14, who spoke about how the next steps of the planning process will allow the city to start seeing plans for the revamped riverfront.

Florsheim also emphasized the importance of overcoming potential obstacles, particularly the worry that this initiative—similar to previous ones proposed by the City—would fail to come to fruition.

“The biggest [obstacle] is the sense that the plan that we have made…is going to wind up being just like all the other plans that have been well-made and well-discussed and eventually shelved for lack of funding, for lack of interest, for lack of a true community effort to make it happen,” Florsheim said. “We have solved too many of the big structural obstacles to redeveloping our riverfront to allow that to happen with this master plan, and it is really the choice of the community, and it is the decisions that we make as a community that will decide whether we’re able to realize this vision or not.”

As laid out by Anjulie Palta of Cooper Robertson, the design concepts break the Riverbend region into four planning districts. These include the Riverside District, the Sumner Creek District, the Hilltop District, and the South End District.

The Riverside District, which encompasses much of downtown and Route 9 and runs from Washington Street to Sumner Creek, was the first redesign area that Palta discussed.

“This district has an incredible opportunity to transform its parking lots, which total 70% of the district’s area, into something that can really complement the existing vibrancy of downtown and Main Street while improving the pedestrian experience,” Palta said. “There’s also a need to create better connections within the downtown and to the North End. Additionally, connections to Harbor Park are not sufficient, and the park itself needs some improvement.”

The Riverside District would see three new zones of development under Cooper Robertson’s proposal, including an expanded YMCA and recreational center in the south, a higher-density, mixed-use area in the middle, and a block for arts and culture in the north. The proposal also includes a historical center-street walk between Dingwall Drive and Court Street, with exhibits on the impact of Route 9 and urban renewal in the region, two additional public garages to make up for the lost parking space, and improved access to Harbor Park through possible transformations to Route 9. One concept Palta proposed was the transformation of Route 9 into a pedestrian-oriented boulevard, creating three signalized intersections for pedestrian crossings. Another option was the construction of pedestrian overpasses over Route 9 to Harbor Park.

“We’ve been working in coordination with [the Connecticut Department of Transportation (DOT)] to explore concepts for the future of Route 9,” Palta said. “We hope that in our conversation today we can get a little bit closer to what the community wants for the future of this piece of highway, so the city can really take that and advocate for a unified vision for Route 9 with DOT moving forward.”

Palta also outlined the proposal of a slave trade memorial in Harbor Park, mentioning that the team has been in conversation with the Wangunk tribe—the original residents of Middletown and the riverfront—to try to honor their history through the project. Proposed design concepts for this area include a new gateway to the Park from Union St., a new boathouse and boathouse plaza, and the programmed riverbend promenade.

Palta then suggested the Sumner Creek District as a possible area of expansion for Harbor Park through the construction of a public boat launch and docking area, an area for community gatherings, and a new public park. This area has been hard to convert into public space due to the presence of the now-decommissioned Middletown Water Pollution Control Plant.

“With the decommissioning of the wastewater treatment plant, a significant piece of the shoreline has been given back to the public and has really unlocked the entire riverfront for comprehensive development,” Palta said.

In the Hilltop District, the team’s planning centered on bringing the Middletown and Connecticut Valley Hospital (CVH) communities together.

“[One of the things we’ve considered is] how can we begin to bridge the divide between CVH and the community through potentially shared landscapes, public access, community programming,” Palta said. “We’ve also discussed how the city might better align with CVH’s long-term goals and plan projects to explore development opportunities that, again, can benefit both CVH and the Middletown community.” 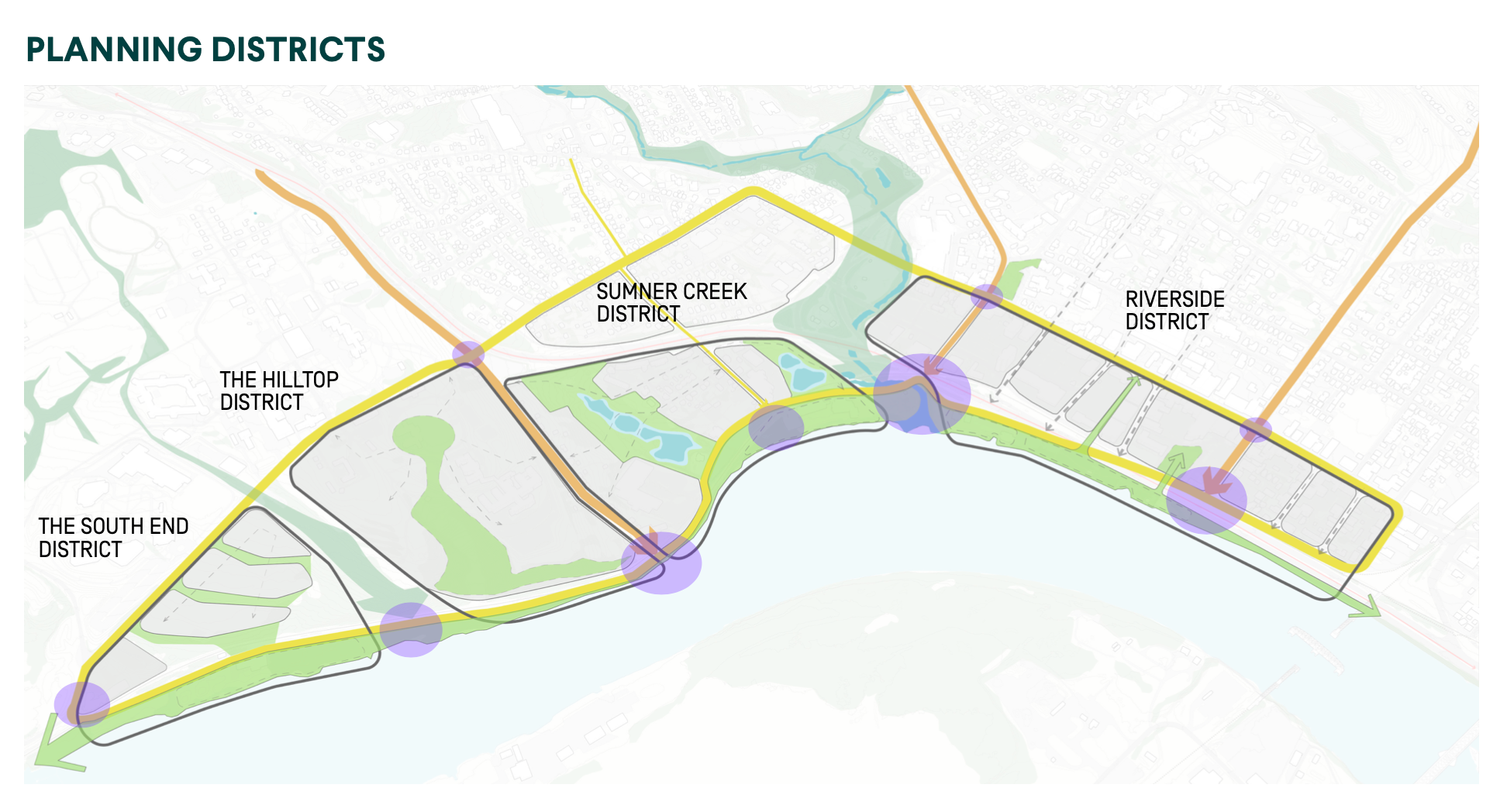 Palta explained that the team has considered the opportunities for new housing development in the South End District, which could be connected to the riverfront.

“The infrastructure of this site provides a major opportunity for meeting the city’s housing needs and could provide a potential bookened to Harbor Park,” Palta said.

The meeting then shifted into different breakout rooms, where attendees could voice their thoughts on the plans for the various districts. Common concerns across the breakout rooms included parking spaces, the importance of connectivity between the four districts (through public transportation or other options), and public recreation areas.

Alternate Commissioner on the Planning & Zoning Commission Kellin Atherton spoke for one of the breakout rooms and emphasized opportunities in the South End District as positive aspects of the proposed plans.

“This district really shows how the riverfront can change how people see and perceive Middletown, especially with regard to housing,” Atherton said.

Following this second community meeting, the planning team will enter the final phase of master planning, where they will generate a preferred plan. The implementation of this preferred plan is expected to begin in summer 2022, when legislative actions required for the plan will begin to take shape.

Florsheim concluded the workshop by emphasizing the importance of community input as the plans for the riverfront continue to move forward.

“I feel even more confident now that we’re on the right track, and I think that especially as we head towards having to make some choices, some tough choices…as the choices get more abundant, they get harder, and so your input is going to be critical for us on that,” Florsheim said.

Middletown residents can continue to keep in touch with the project by visiting the project website, stopping by the project gallery at the Main Street Market, or sending questions or comments to riverbend@middletownct.gov.