City of Middletown Hosts Return to the Riverbend Community Workshop 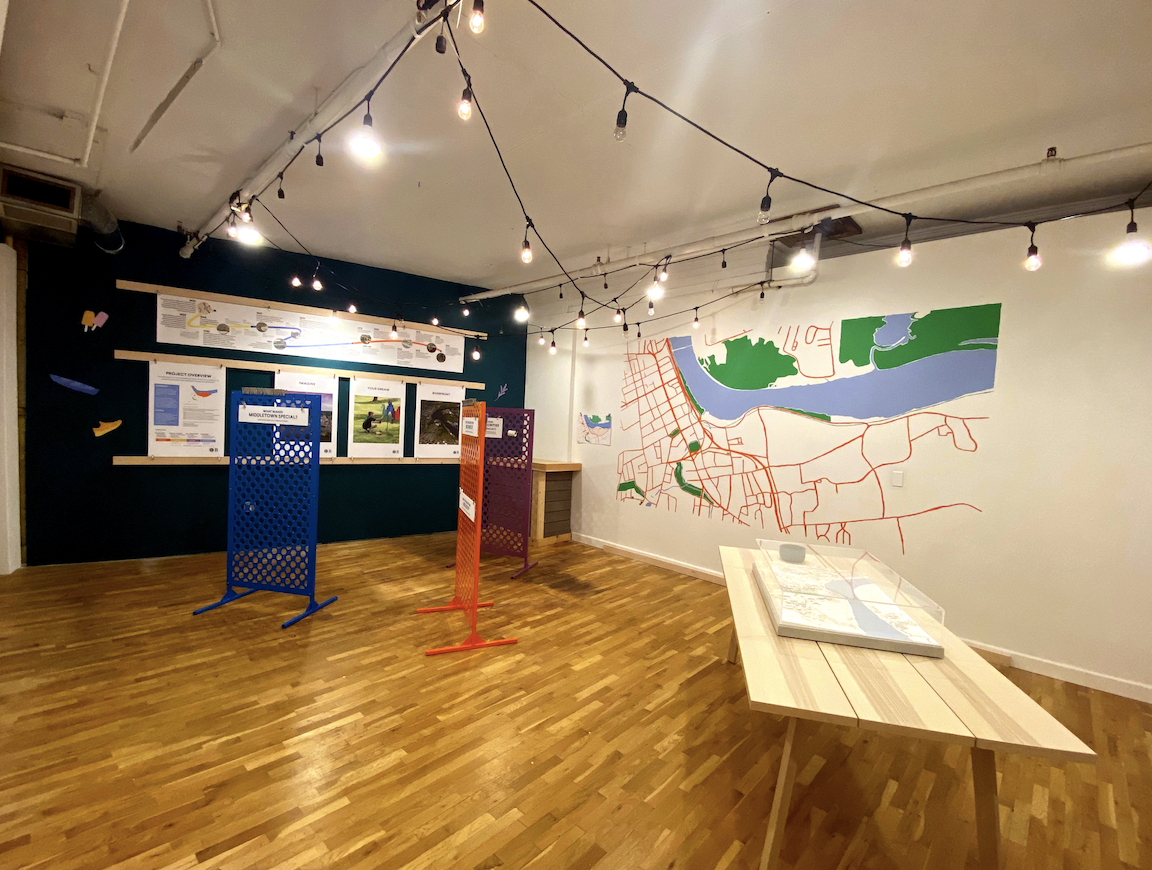 The City of Middletown hosted a virtual community workshop on Tuesday, Oct. 12 at 6:30 p.m. via Zoom to receive community feedback about the City’s Return to the Riverbend campaign. Headed by the City in coordination with consulting firm Karp Strategies and urban design firm Cooper Robertson, the initiative aims to revitalize Middletown’s riverfront and create new public spaces along the river. The project focuses on the approximately 200 acres of land along Connecticut Route 9 from Harbor Park to Silver Street and along Silver Street to the Connecticut River.

The workshop, moderated by Alexandra Sutherland-Brown, a principal strategist at Karp Strategies, was the first of a series of planned community meetings to receive feedback from various stakeholders in Middletown. Over 150 people were in attendance, with 60% self-identifying as residents, 18% as community leaders, and under 10% as business owners, students, city staff, or other. Multiple members of the Middletown Common Council also attended, including Democratic Majority Leader Eugene Nocera and Republican Minority Leader Philip Pessina, both of whom voiced support for the riverfront development efforts.

“We have been working towards [this project] in many ways for a couple of decades now as a city but in earnest over the past two years or so,” Florsheim said. “When I first ran for this job two years ago, one of the things that was most important to me and was most important to the people who I talked to was getting a real plan in place and starting to finally move forward on something that’s been talked about for a long time, which is reconnecting the city to, really, its origin, and in my view, kind of its soul, which is this riverfront and its waterfront.”

The City of Middletown was initially founded as a port city on the Connecticut River, but interest in and interaction with this region has died down. Though the riverfront has not been considered as fundamental to the City’s development in past years, Florsheim explained that the campaign aims to bring the riverfront back to prominence.

“Over time, generation after generation, that riverfront, that waterfront, has become more and more separated from the ways in which we conduct daily life in this part of the state and particularly in our City of Middletown, and that’s why we’re calling this the Return to the Riverbend, because the connection to the river is not something that is new to the City of Middletown and to this area,” Florsheim said. “It’s something that we want to return to and that our citizens, for a long time, have been waiting for the plan for how we would return, and so two years later, after lots of hard work, I think that we stand on the precipice of making that happen.”

Florsheim explained that previous attempts to revitalize the riverfront had been limited by the lack of a concrete plan for development and the expected costs of the project.

“It really boils down to…the lack of a real plan, the lack of something going beyond sort of a general notion, but a real vision and a real plan for execution, and that’s what we have brought Cooper Robertson on board…to help us develop over the next year,” Florsheim said. “Then the other thing was cost, was money. The money wasn’t there because there are an enormous amount of costly things that needed to happen… into the tens and twenties of millions of dollars in terms of their expense, and it takes a long time for things like that to come to pass.”

He also stressed the importance of community input throughout the future development of the Return to the Riverbend campaign.

“To me the most important thing is to make sure that it is for everyone, that it is something that’s driven by you, that’s driven by the community, that is not going to require a high price of entry,” Florsheim said. “We need this to be a comprehensive process, to look at the whole riverfront holistically, and a process that is driven by the public and the whole community to make sure that it reflects—and when we look back a generation from now, we can feel that it did reflect and does reflect—the values of this community.”

The meeting focused heavily on community engagement, as speakers emphasized the need for public input in order to formulate the City’s plan for the riverfront. The consultants laid out their plans for future community engagement events for the Return to the Riverbend project, with another Community Workshop scheduled for fall 2021 or winter 2022 and pop-up events to be held in spring 2022.

Director of Urban Design for Cooper Robertson, Mike Aziz, explained that the design firm will be working with Karp Strategies and Connecticut-based engineering firm Langan throughout the process.

“It’s clear that the time is now, this is a generational opportunity, and that there’s real commitment on the City’s part, on the community’s part, to do this the right way,” Aziz said. “We are so pleased to have been selected.”

Director of Economic and Community Development for the City of Middletown Joseph Samolis emphasized that the community meeting was important in order to ensure that residents’ suggestions would be taken into account. Samolis addressed Middletown residents directly.

“This is much more than just the visioning process for the riverfront,” Samolis said. “It’s really putting that vision and codifying it into legislation, into zoning code, so that we make sure what you guys put forth today is actually put into law, essentially, so that we can make sure that whatever development does come forward is in line with your thinking of what you’re putting forth today in this community meeting and in future meetings as well.”

During the discussion and small-group breakout sessions, the planning team conducted polls asking what types of development the community would like to see in the area. In every breakout group, attendees responded almost unanimously in favor of having parks and recreation spaces at the riverfront. However, they were more split over the construction of places to work and shop and largely against developing the riverfront for housing spaces.

Participants were also given the chance to express their thoughts to the larger group and describe their priorities for the riverfront. Middletown resident John Hall expressed strong support for the recreational usage of the riverfront as eventually leading to economic growth. 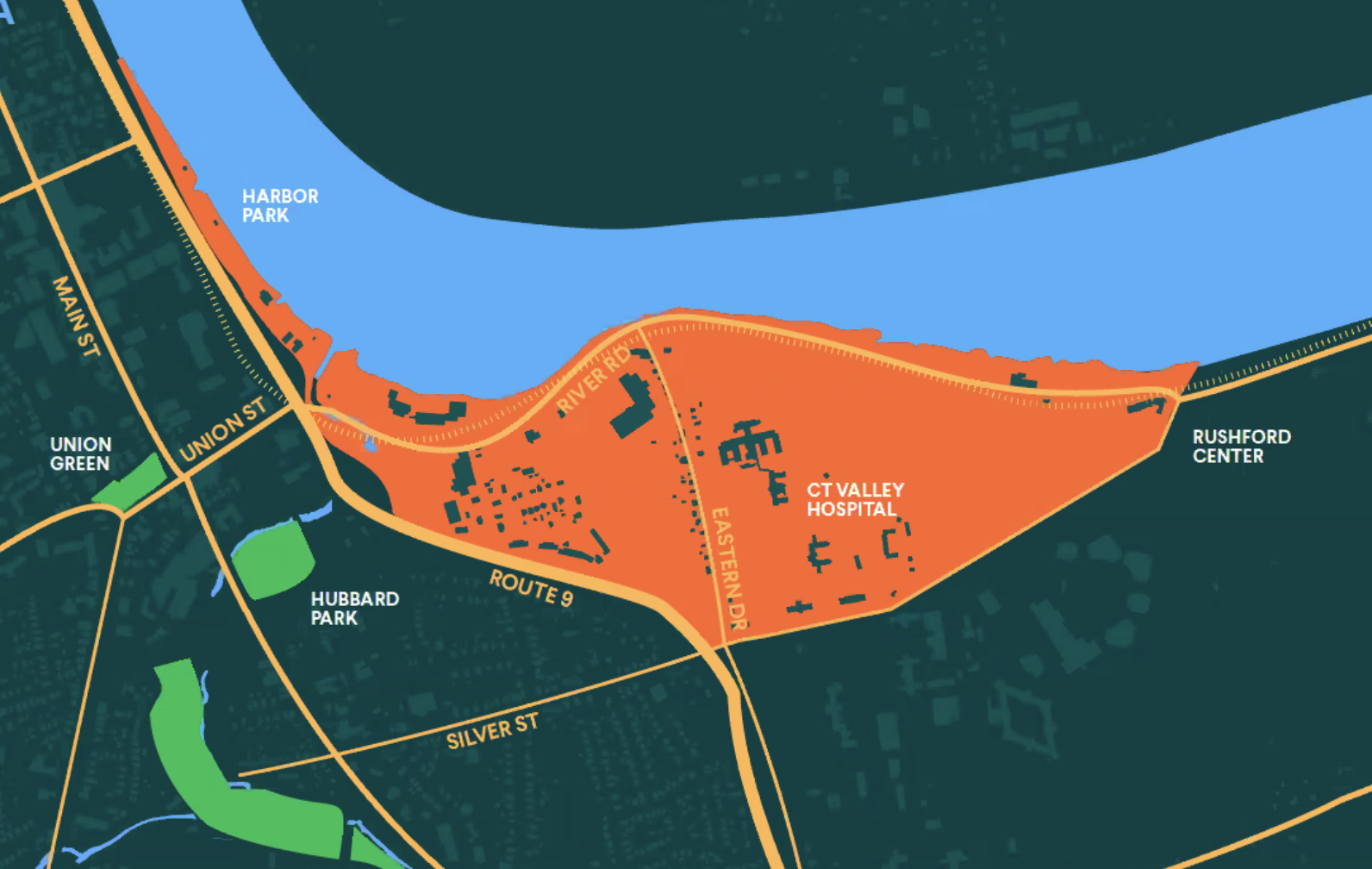 “I just want to emphasize that the main thing at the riverfront is the water,” Hall said. “Water is a magnet for people. People go there to watch the river, to see what’s happening on the river, to go out onto the river, so I think passive recreation should be the starting point from which everything else evolves. If you get people going down to the river to exercise, to hang out, to look at the river, to watch events, economic opportunities will be created around that, and that should be the order of the evolution. We shouldn’t be thinking prematurely about what business might work down there. It’s really all about the river in the natural setting, which is so attractive and important to people.”

When it came to commercial and retail spaces, multiple attendees raised concerns about competition with existing establishments on Main Street.

“Another very important idea was the fact that if we had too much commerce in our new open area…it would take away from the wonderful commerce that we already have downtown,” resident Mardi Loman said. “People might want to go to the new restaurants and new businesses that were set up at the river, thus perhaps…killing the commerce on Main Street.”

Another major concern for attendees was the need for parking space in a public area that would likely be well-trafficked.

“There was discussion about an improved traffic pattern in the area,” resident Eamonn Wisneski said. “Another possibility…was public transportation and how there could be some sort of shuttle or trolley or something that would circulate people potentially between Wesleyan, Main Street, the Riverfront area, a parking area, and maybe other areas to be able to bring people around without a ton of parking needed right there in the heart of the [Riverfront].”

The planning team also informed attendees about the Return to the Riverbend Design Gallery, which opened on Saturday, Oct. 16 at the Main Street Market (368 Main St.). The gallery will serve as a space for all interested residents, business owners, and other community members to visit, ask questions, and see what stages the project is in.

“We’ll have interactive activities there that rotate in and out; we’ll display the latest design work; it’ll be periodically staffed by our team members,” Aziz said.

Florsheim also touched on the City’s ongoing talks with the Connecticut Department of Transportation (DOT) over the DOT’s current project to remove two traffic signals on Route 9. The mayor explained that although the state department still plans to go ahead with the project, it does not currently have a plan in place, which could be in the City’s favor when taking the Return to the Riverbend campaign into account.

“As long as there’s no plan [for the signal removal] at the state level…the more detailed and better riverfront plan that we have in hand, we can say to the state, ‘Look, this is the riverfront plan that our community has come up with, and we need to engineer a transportation solution that accommodates this,’ rather than the other way around, rather than us having to accommodate everything to a project that the state acknowledges we need to be innovative in terms of how we look at it,” Florsheim said.

As the session came to a close, Sutherland-Brown emphasized that all the ideas put forward by the community during the workshop would be taken into consideration by the planning team.

“We’re going to be combing over all of these ideas, all of the chat, all the breakout room notes, et cetera, and sharing back with you in the coming weeks and months,” Sutherland-Brown said. “This is really the beginning of the community engagement process, and…this is not our last chance to speak with this group.”