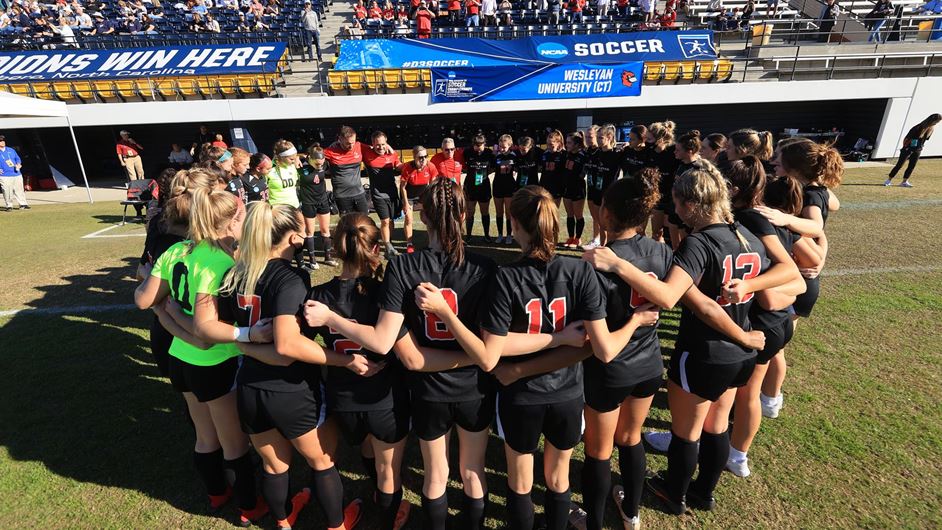 The women’s soccer team’s historic run at the NCAA Tournament ended in the Final Four with a tough 1–0 defeat to first-ranked The College of New Jersey (TCNJ).

Against the Lions, the Cardinals got off to a strong start in the first half as they outshot TCNJ 11–3.  However, the first half remained scoreless as Wesleyan could not convert any of their offensive chances. TCNJ was denied a goal on their best scoring opportunity of the half when Cards midfielder Isabelle Martin ’23 cleared a ball off the goalline that had gotten behind goalie Sarah Hammond ’23.

Just under 20 minutes into the second half, TCNJ came out as the stronger team and got on the board first. Facing a deficit for the first time during the tournament, the Red and Black fought hard to try to tie the game up, but they were unable to as TCNJ closed out the 1–0 victory. The Cards ended up being outshot 15–14, with Grace Devanny ’23 and Emily Ribatt ’21 MA ’22 leading the way with three shots apiece. In goal for Wesleyan, Hammond made two saves.

Overall, Martin was happy with the team’s performance despite the tough loss.

“I think we played well and fought hard,” Martin wrote in a message to The Argus. “In my opinion we were the better team and controlled most of the game but we just weren’t able to get one in the back of the net. We battled until the end and overall I’m proud of our effort.”

Even though they came up short of a national title, Martin emphasized positive aspects to reflect on from this run to the Final Four.

“I think one of the biggest things we can take away from our final four run is confidence in our abilities,” Martin wrote. “We know we can play with any team in the country and we need to bring that belief in ourselves into the upcoming season.”

“When you start to believe you are just as good as any team, winning starts to happen,” Coach Meredith wrote in a message to The Argus.

Overall, Wesleyan has a lot to be proud of this season. They finished with the most wins in their program history (18) and at their highest national ranking ever (4th) due to their first-ever Final Four appearance. Now, Coach Meredith is already thinking about what comes next. Looking ahead to next season, the majority of this year’s roster will return Red and Black as they look to build off of this historically successful season.

“We need to have a productive off season with players getting more comfortable in the weight room to work on strength and explosiveness,” Meredith wrote. “We also need to continue to practice with a game mentality in mind. You play the way you practice, and this team has performed at a high level in practice day in and day out. That has translated into our high press, fast-paced style of play.”

Despite the tough loss, the players are optimistic about their next season and are ready to smash their records.

“I think we will use the disappointment of our loss in the Final Four as motivation,” Martin wrote. “We have lots of talent returning and the experience this year will fuel our desire to go even farther next year. We know that every game, starting with our first preseason scrimmage matters. Every time we step on the field we need to play with the confidence we have gained and look to achieve our goals one game at a time.”