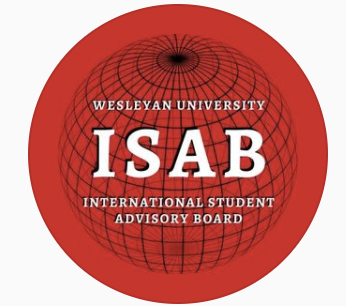 Bae, who considers both Suwon, South Korea and Vancouver, Canada to be home, decided to join ISAB to improve how the University meets international students’ needs.

“I joined because I felt that the international community has a lot of needs that are quite different from other communities, but it’s not very clear on how we can fulfill those needs, whether it’s related to visas or work or emotional support or just community activities or things like that,” Bae said. “It wasn’t very clear where you can reach out, what you can do. So I felt that I wanted to join ISAB and see if there’s anything I could do to contribute. I could make new incoming international students or students that are already on campus feel more represented and more secure.”

Similarly, Goss, who was born in the United States but has lived in a number of different countries, including Chile, Panama, and Germany, felt that becoming an ISAB member would allow her to help other international students.

“Because I’ve been outside of the U.S. for so long…one of the communities that I feel most connected with in terms of identity is the international student community,” Goss said. “And so I kind of just wanted to be more involved in that and do what I could for the community, and I felt like ISAB was a really good fit for what I wanted to do.”

For Pesmazoglou, who is from Athens, Greece, adjusting to life in the United States as an international student was a difficult change.

“I knew that I would have to adjust to some things, but it was more things like the food, the educational system,” Pesmazoglou said. “The Greek educational system is completely different from the American [system]…and I just had a hard time adjusting to things.”

Because of these experiences, Pesmazoglou joined the ISAB to help other students facing similar challenges.

“When I saw ISAB…I thought that it would be nice if I had someone helping me,” Pesmazoglou said. “At that point, because I was also online, I didn’t know that there were a lot of different communities that I could be part of or just join something, or just ask for help. And I didn’t want to email the dean or something like that. So I think that I just really want to help people who are in similar situations.”

Bae also studied remotely during the last academic year and struggled to get to know groups on campus.

“Since I took the last year remote, I didn’t really get a chance to get to know the student groups on campus or advocacy groups on campus,” Bae said. “So I felt like it was very remote from me, and I feel that, like a lot of sophomores, although we’re sophomores, kind of feel that way, like, we’re kind of spiritually freshmen. So I wish that people feel more free to reach out, [feel] more connected.”

The new members view ISAB as a bridge between the international student community, the OISA, and the University’s administration.

“[ISAB is] a lot of advocacy, but mostly just taking the concerns of international students and making them visible to the administration, kind of just forcing the administration to pay attention to us and what our needs are,” Goss said.

Pesmazoglou explained that, as international students themselves, ISAB members understand community concerns on a personal level.

“I feel that [OISA] can’t see aspects that we see, ’cause it’s in our everyday life and people and our friends, and it’s more personal,” Pesmazoglou said. “So I feel, for us, we’re part of the community and we’re just representatives of the students and we can then take all our concerns from our friends or people we’ve heard about that have certain problems, and we can take it back to OISA, which then helps. So like the middle ground.”

The three new members will attend their first ISAB meeting on Thursday, Dec. 9, prior to their first semester on the board. In the spring, Bae plans to focus on helping ISAB work on its current projects and shaping its relationship with the OISA.

“I’m kind of more leaning towards learning how ISAB works and going along with the projects that are already scheduled,” Bae said. “Since OISA is changing a lot with the new head director [Morgan Keller] and dynamics are changing and…the goals are changing, I am more interested in figuring out how that will work out and how we can initiate new change with the new people.”

While serving on ISAB, Pesmazoglou wants to focus specifically on helping international first-year students adapt to life at the University.

“I think that I generally want to help more [first years] because I feel that once you kind of get the hang of it, you also adjust to the culture, and then you meet people, you have your friends, there’s a lot of people that you can depend on, but as a [first year] coming in here, it’s kind of scary and you don’t know what’s happening,” Pesmazoglou said. “So I feel that’s a big part of what I want to help.”

Ahead of the new members’ first meeting with the rest of the board, Goss is excited to start working with the ISAB.

“I’ve already met some of the people who are on the board, but it’ll be nice to meet everyone else then and just get started, and, yeah, I’m very excited for it,” Goss said.