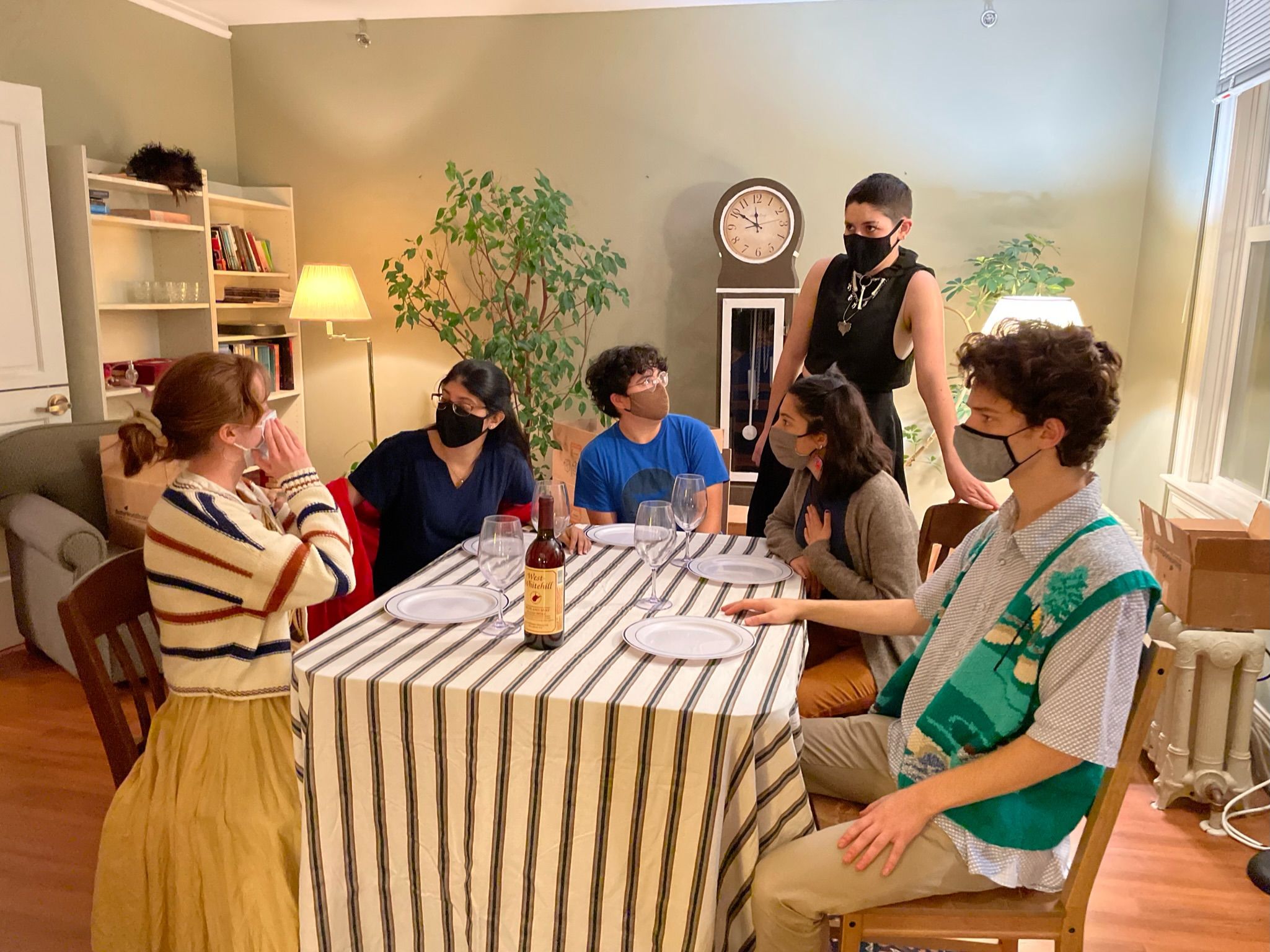 “Party at the Edge of the World,” an original theater capstone production written and directed by Liz Woolford ’22 and Michayla Robertson-Pine ’23, debuted in the College of the Environment (COE) this November.

It was a gift to perform in this incredible show and to collaborate with such a wonderful team. “Party at the Edge of the World” is an exciting yet emotional story that explores what it means to be a family; how to lead with joy, not fear; and how to say goodbye to the most meaningful pieces of our lives.

The play depicts the life of Georgie, a nine-and-a-quarter-year-old, who, with his parents, is tasked with clearing out his late grandmother’s house. In this setting, Georgie meets Fangs, a mysterious creature, and their gaggle of ghosts. At first Georgie, played by Drew Weddig ’24, is frightened and concerned at Fangs’ appearance, as only he can see the creature. Over time, he and Fangs, played by Sof Cohen ’23, grow close. Fangs teaches Georgie how to throw the perfect party and “drink up life.”

The show takes place in a floodplain and deals with the terrifying consequences of the climate crisis, repeatedly mentioning that the water is coming. Characters repeatedly remark, “We can’t stay dry for long.” “Party at the Edge of the World” delves intimately into how it feels to live on the edge of a climate disaster by focusing on a single group of people and their relationship to the impending demise of their landscape. The show combines multiple nontraditional elements including contra dancing, singing, and shadow puppets.

Woolford and Robertson-Pine began their writing process while taking a class with Assistant Professor of Theater Katie Pearl, titled “Following Fornés” in Spring 2021. The class explored writing by encouraging budding playwrights to follow their instincts. Woolford and Robertson-Pine adopted this writing style, penning several scenes based on random people, places, and objects. Towards the end of summer, they were trying to figure out what story they wanted to tell.

“We had to make choices and it would be clear if they were wrong, and we could change and go from there, but making choices really quickly defined the entire rest of the process,” Woolford said.

By the time auditions rolled around, Woolford and Robertson-Pine had a loose script. The pair accomplished much of the concrete writing once rehearsals began.

The concept of the show was shaped during Woolford and Robertson-Pine’s deferral of Fall 2020. The title originates from a thought Robertson-Pine had one day that fall during a walk: What if there was a party at the edge of the world?

In popular discourse, the edge of the world is said to be a place where time becomes wonky and if you fell off, you’d fall into a pit of monsters. This idea intrigued Woolford and Robertson-Pine and served as an inspiration to their vision of the show. The pair were also drawn to the idea of a party as a space where both celebration and grief can be felt.

“A party has a really charged energy of people coming together to feel something, and the act of celebrating and the act of coming together is very similar to theater in a lot of ways, but a party allows for so many versions of that to mingle,” Robertson-Pine said. “Our biggest act of following has been saying yes to this title; it has all the stuff in it that we were excited about investigating.”

Once they came up with the title, the pair introduced it to the student forum class they taught in Spring 2021 called “Ecological Disasters: Investigation Through Performance.” Together, the group brainstormed about edges, parties, and what these themes could look like within the context of a show.

Rather than performing on a traditional stage, “Party at the Edge of the World” took place in the COE. The COE is a house where some environmental studies classes are held and is home to many faculty offices. This space is much smaller than a conventional stage and allows the audience to be much closer to the actors. Woolford and Robertson-Pine are known for their on-campus immersive theater work like their original production of “The Dream Circus” in Fall 2019 and wanted the audience to experience what was happening in the story rather than just witness it.

“Putting people in intimate spaces with each other is incredibly powerful because you can’t deny the existence of the other person saying something so close,” Woolford said. “You’re literally sharing a space together and you can’t check out. You are a participant in what is going on.”

As an actor in the show myself, performing so close to my audience was a very new and rewarding experience. After a performance, it felt like the actors and audience knew each other a little better, even if we had never spoken before.

Woolford and Robertson-Pine enjoy creating site-specific work and explained that the COE was an appealing space to them because it has many nooks and crannies.

“The audience gets to peer into all these little worlds,” Robertson-Pine said.

Alix Livermore ’24, who played the characters Grandma and Shirley, reflected on performing in the COE.

“It is such a unique experience, and it really helps me to ground myself in the story.” Livermore said. “Being able to interact with a home and move through the house makes everything feel real.”

Woolford and Robertson-Pine took a collaborative approach to character development, allowing actors to be deeply involved in the process of bringing them to life. Not only did the performers come up with our own character’s names, but we were encouraged to ask questions about them and the relationships they had with each other. Woolford spoke about how much of the script came about through questions we were excited to explore. What is the relationship between Mom and Grandma? What does my character Raajni, a child psychologist, want to achieve? How are the ghosts connected to the house? How are they connected to Fangs?

“The real muscle and flesh of the play came in what you all were interested in and being excited about how we could capitalize on that and what was already there,” Woolford said.

“I feel like our job is to ‘yes and’ everything that you are all thinking about and figuring out how to weave it together into something cohesive,” Robertson-Pine said.

Many of our relationships as friends influenced how Woolford and Robertson-Pine wrote about the relationships between our characters. For example, the dynamic between Mom and Dad was built upon the ways that actors Emma Dhanda ’24 and Henry Owens ’25 interacted with each other.

“I love the amount of time we’ve spent building our characters and relationships,” Dhanda wrote in an email to The Argus. “It’s not an experience I’m very used to and having the freedom to take risks and make choices has made me a lot more confident in being truthful to my role.”

The beginning of our rehearsal process included an improv exercise that lasted more than half an hour, in which we actors lived as our characters. It was an exciting experience to find new things to say and do while at the same time reacting to what everyone else was doing. Through this exercise, I decided that my character, Raajni, uses a variety of techniques to get Georgie to open up about seeing Fangs. I also figured out that she competes with Fangs for Georgie’s attention, even though she can’t see them.

“I loved that our characters and the show itself were able to grow together,” Owens wrote in an email to The Argus. “We would start with text that would inspire character work which would be incorporated into the next revision that would allow us to explore our characters even deeper. It was a back and forth that allowed an incredible richness in acting and story to develop.”

Through making these choices, having character conversations with the directors, and working deeply with our characters, we became very familiar with them. By the end, I felt like my character was a real person that I could go on a walk or grab dinner with.

One exercise we did that stands out in my mind was to close our eyes and imagine our characters in front of us, picturing what they looked like. Then, we’d step into our character, open our eyes, walk around as our character, and interact with the other people in the space. These moments of silence also fueled the closeness amongst the cast.

Another exercise we did as a group was closing our eyes and counting to 21 as a group, the catch being that only one person could say each number. It requires an acute sense of listening and feeling each other’s presence in the space to accomplish this task.

“[It] asks you to relate in a different way,” Robertson-Pine added. “You have to be aware of your body as a part of a web. You are not alone, you’re not individual.”

After three months of this kind of work, we began to trust each other, and I never felt judged when I made silly or unusual choices. There were so many times where we would simply look at everyone in the circle and appreciate the people that we were collaborating with.

One time, the whole cast got in a circle, put our hands on each other’s backs, and leaned back. This was how it felt going through this process; we were all holding each other, and I think that’s something so special that we got to give and receive.

“You are holding each other,” Robertson-Pine said of each show. “It’s an incredible act of generosity, we can feel each other’s hands and now we get to lean back.”

Originally, the shows were scheduled to run from Nov. 18 to Nov. 21. However, due to a COVID-19-related situation among the team, some of the weekend performances were postponed to Dec. 4, 2021.

After a two-week hiatus, the entire team was excited to come back into this world we had created and do two more shows. There were countless new connections we found with each other that breathed new life into this project that we’d been working on since September.

“Actors were able to use the work of designers, designers got to watch their creations in action, and it all came together beautifully,” Malaika Fernandes ’23, one of the stage managers, wrote in an email to The Argus.

In the end, while the goodbye was teary, we were all grateful to have had the opportunity to perform again and to give the house and this show the proper send-off that it deserved.