“The Dream Circus” Implicates the Audience in Its Strangeness 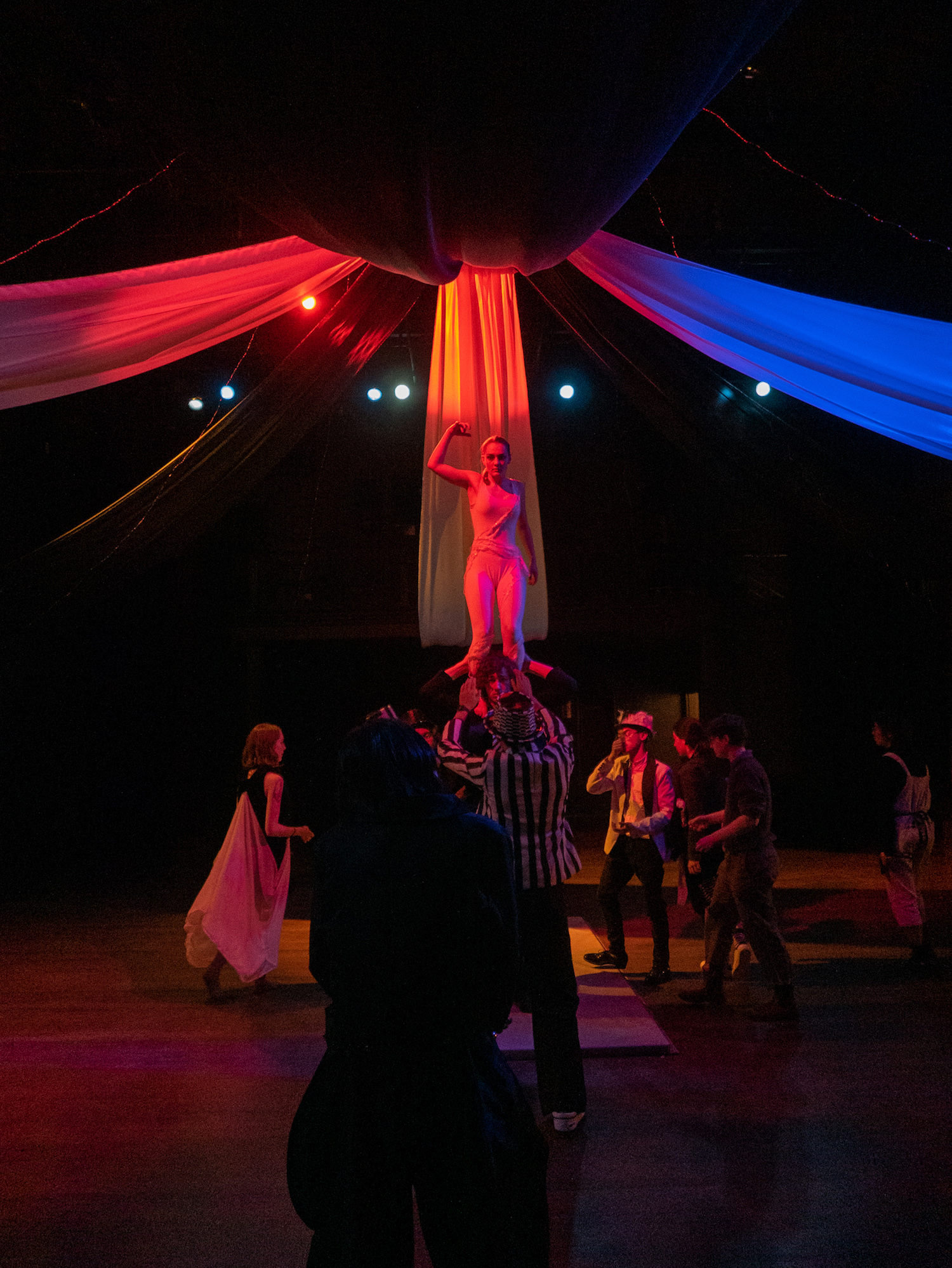 “Have you ever been in love?”

Sitting in the dark, I wondered if anyone could tell that I was visibly turning red. I’d never felt so exhilarated or so vulnerable as an audience member during any other theatrical performance, but “The Dream Circus” is as much role-playing or Escape Room as theater.

“And nothing is what it seems.”

“The Dream Circus,” performed in the Patricelli ’92 Theater this past weekend, eschews the usual actor-audience relationship—that is, actors on the stage and the audience in their seats—for an immersive simultaneous performance that occurs in multiple rooms and areas of the theater.

“The Dream Circus” was directed by Michayla Robertson-Pine ’22 and Elizabeth Woolford ’21 and “devised” by the cast during their rehearsals.

For the audience, there are just a few rules: Obey all instructions from cast members, speak only when spoken to, and do not open doors unless they’re opened for you.

Walking into the theater feels like entering a haunted house, as the attendant leads us down through the theater and the fear gets taken up another notch after a haunting opening dance number with eerie music created by Dylan Shumway ’20. Just when things seem to be calming down, members of the cast tell you that there is a technical problem, the lights go out, and the strictly 19-member audience is hurriedly divided up by the circus performers and led their separate ways.

The situation feels rather hostage-like. The tension is palpable. Where are we going? What is going to happen to us?

From this point, everyone’s story is slightly different. There is no one “Dream Circus” experience. The intricacy and level of detail needed to pull off simultaneous scenes at once is impressive on its own, and a credit to the cast and crew.

The show plays around you all at once. In every corner, there’s a performer waiting to interact—and it all starts to feel like a game of Clue. Except it’s not clear if there’s a crime, and if so who committed it. But there’s definitely something fishy going on.

As I journeyed across the circus a common thread emerged—memory. “The Candyman,” played by Liam Caplan ’22, asked us to draw ducks for his friend to remember. “The Clown Statue,” played by Xiran Tan ’23, wanted our memories to hoard in her mason jar (I almost gave away a cherished memory with a friend). And “The Producer” of the Circus, Skye Gao ’23, a ghostly figure, offered me an opportunity to forget my past, and join the Dream Circus! I declined. Then, having second thoughts, I attempted to sign the contract, but I had lost my opportunity; they had already disappeared.

A unique aspect of the show that allows for its diffuse narrative structure is the intricate process for shuttling the audience from encounter to encounter. Once an actor has finished their material, they must seamlessly extricate themselves, remaining in character all the while, and pass the audience off to someone else as they prepare for their next scene. Done well, this is a magical system that integrates these transitions into the plot, as in cases when characters suddenly disappear. Understandably, though, this delicate audience conveyor belt sometimes breaks down. At the dress rehearsal that I attended, members of the audience complained after the show that they felt lost at times when no one had materialized immediately to guide them after a scene.

However, I enjoyed these moments in no-man’s land. They felt oddly liberating. Watching the surreal dance war between “The Ringmaster,” Ellis Collier ’22 and “The Ghost,” Elodie Frey ’22, in a small group without any explanation was bewildering, but I could easily suspend belief. Unlike in a normal play, my mind never wandered. The wandering and non-linear form of the show paradoxically focuses the audience, because every scene is a puzzle to decode.

This immersion peaked when scenes connected narratively, like an episode of a TV show—building towards something greater. These are the moments when the Circus is at its best: when the random vignettes with the various oddball characters collide. It feels like a movie, but one in which you can say whatever you want and the actors have to respond.

Down in the bowels of the theater, “The Detective,” Franklin Ribli ’22, told me to stay out of sight next to an abandoned room that we were supposedly going to investigate while he got out his keys to unlock it. My audience companion went with him, and I was left alone. That’s when the door opened. And I ran out of real fear. In that moment I had totally bought into my new reality. I had been told to stay out of sight, and I intended to obey.

This experience demonstrated for me that positing interactivity between performer and audience forces members of the audience to become performers themselves. And having to perform after not expecting to elicits all sorts of surprising responses.