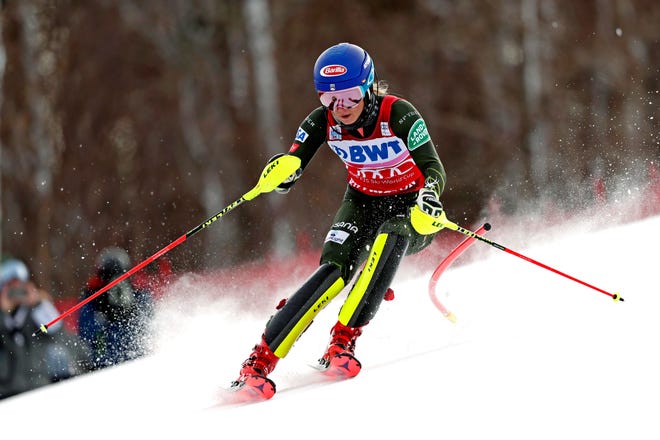 On Sunday, Nov. 28, in Killington, Vermont, Mikaela Shiffrin bested rival Petra Vlhova to win her 46th slalom race. The victory tied Shiffrin with Swedish legend Ingemar Stenmark for the most victories in a single discipline; Shiffrin already passed Stenmark’s record number of slalom wins with a victory at Levi, Finland in 2019 with her 41st win. Stenmark holds her 46-victory record in giant slalom.

Shiffrin’s victory snapped four straight runner-up results, two of which saw her finishing behind Vlhova earlier this season. But when it comes to Killington, Shiffrin can do no wrong. Shiffrin, a Vail, Colorado native, lived for a time in New Hampshire and attended Burke Mountain Academy in northeastern Vermont. The academy is considered the pinnacle of American ski academies. Its proximity to Killington (only a two-hour drive) gives Shiffrin a home-field advantage in one of the first races of the year, an advantage she continued to capitalize on with her now five consecutive slalom wins at Killington.

Slalom races consist of two runs, ranging from 45 seconds to over a minute. The races are short and quick, leaving no room for error. To begin a ski race, each contestant takes a run to look at the course, a period called inspecting. The inspection allows racers to memorize certain parts of the course and create strategies to effectively generate speed in some parts and play it safe in others. Since every ski race has a different course, inspections are a key aspect of preparation. After inspection, racers are given a short period of time to get back to the top of the course and go through a full warmup before their race. To begin, a few forerunners run through the course to set a track. Behind the forerunners, the racers start their first run. After the first run, the top thirty finishers start in reverse order according to their times. In the World Cup, finishers outside the top thirty are not allowed to have a second run.

Having a strong first run, Shiffrin began the second run in second place, two-tenths of a second behind her closest rival Vlhova. Thus, Shiffrin started 29th and Vlhova 30th. To begin her turn, Shiffrin stepped up into the starting gate and looked down upon the course as flurries of light snow came down around her. Other than a small error at the top of the course, Shiffrin continued to widen her advantage from four-tenths of a second to just over eight-tenths of a second and was welcomed to the finish with a loud roar from the crowd.

The roar must have been heard by Vlhova in the starting gate, who would now know that Shiffrin had thrown down the gauntlet and that Vlhova needed a perfect run to maintain her lead. Vlhova started strong, but at a turn a couple of gates lower than where Shiffrin bobbled, Vlhova got caught on her ski and had to scrub a significant amount of speed to stay in the course. The error cost her a second of time and the lead. Vlhova came into the finish just under a second behind Shiffrin in the run and three-quarters of a second behind her in the race.

At the post-race interview, Shiffrin, who was still out of breath from her run, said she was happy with her second run. She was aggressive throughout the race despite her slight initial mistake. She also noted the pressure Vlhova has been applying, with her two victories in the earlier slaloms.

Looking towards the rest of the season, Shiffrin will not have an opportunity to add to her 46 victories until Dec. 29th in Lienz, Austria. The slalom race at Lienz will also mark the 12th anniversary of Shiffrin’s first podium, which she achieved 16. However, with skiers racing well into their thirties, Shiffrin could churn out another ten years in the sport, continuing to break records.

For those who are not as well acquainted with the skiing world, Shiffrin is known for her meticulousness and drive to succeed, which makes her an absolute joy to watch. Shiffrin will easily go down as the greatest skier of all time, and her eminent 47th win will be yet another milestone in an unprecedented career.