Two weeks ago last Monday, I was holed up in Exley for a late-evening study session with two things on my mind. One was my assigned readings for my Greek History class and the other was my Fantasy Football matchup. I had given up any hope of prevailing in the latter, being down by 30 points with only one player left in my arsenal. I should have known better. That one player remaining was Derrick Henry, the Tennessee Titans’ superhuman running back, who rushed for 143 yards and three touchdowns that night. Moreover, he accomplished this feat against the Buffalo Bills, who had proved themselves the previous week to be the best team in the NFL after avenging their AFC Championship Game loss to the Kansas City Chiefs. By virtue of Henry’s efforts, Tennessee ended up winning by three points. Taking a break from a passage of Herodotus’ “Histories,” I saw that I had won by five. 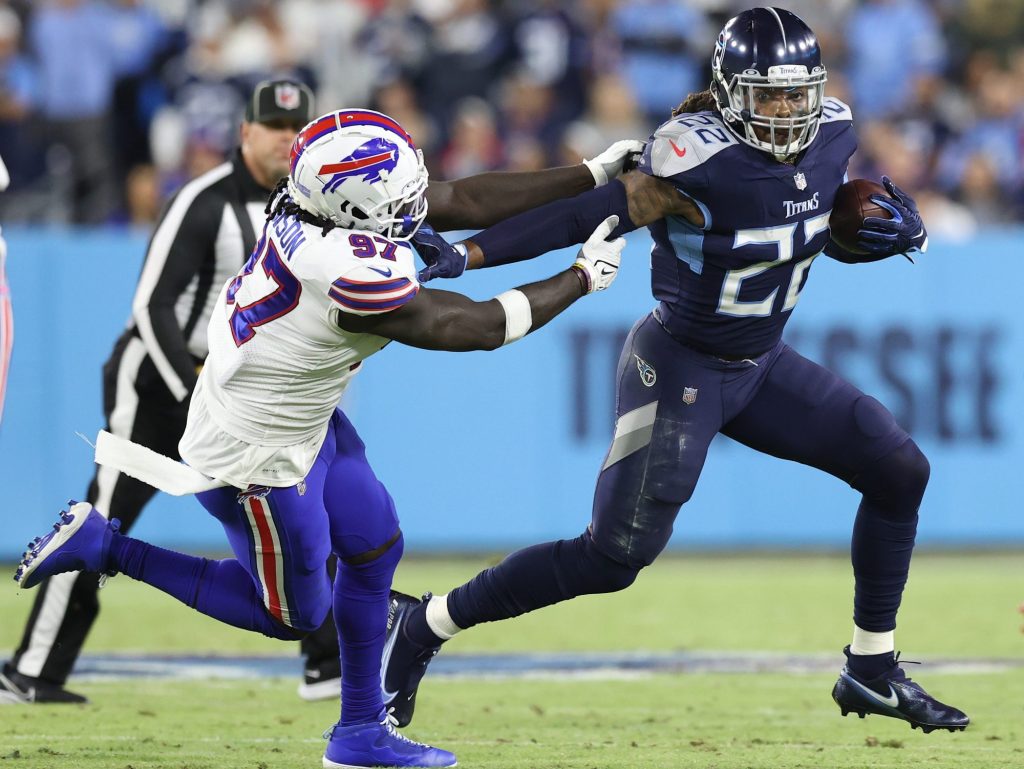 Just before I made my way back to my dorm, I read a tweet that expressed the sentiment that one could sleep well at night with Derrick Henry on their fantasy team. I concurred at the time, but now I may soon be making an investment in NyQuil. Last Sunday during a 34–31 overtime victory against the Indianapolis Colts, Henry suffered a broken foot, an injury that will require surgery to heal. At the very least he will be out for six to ten weeks and it is possible that his season is over. Let me be clear that the greatest loss here is not to my fantasy football team, but to Derrick Henry himself, the Tennessee Titans, and to football as a whole. In fact, it’s a stretch to categorize my loss as being a loss at all. That said, I (and undoubtedly every other fantasy owner who had Derrick Henry on his or her starting squad) cannot help but mourn this reversal of fortune.

To provide some context, there is nothing more valuable to a fantasy football team than an elite running back. This is because elite running backs have a tendency to score a lot of points and such running backs are exceptionally hard to acquire. As a result, these most valuable assets are usually the first to go in fantasy drafts. They are usually followed by elite wide receivers, who tend to be somewhat lower in scoring and somewhat higher in availability. Quarterbacks tend to go late; although they, like elite running backs, reliably amass sizable point totals, there are plenty of them to go around.

However, elite running backs are almost as volatile as they are valuable. No other skill position subjects players to so much wear and tear, and NFL franchises have an unfortunate tendency of running star backs into the ground. Consider Todd Gurley, the former face of the Los Angeles Rams, who was the consensus MVP of my first fantasy football league back in 2017. That year, he was the NFL’s Offensive Player of the Year, and in 2018 the Rams gave him a four-year, $57.5 million contract extension that included $45 million in guarantees, which made him the highest-paid running back in the history of the NFL. Two years later, he was released from his contract because of a precipitous decline in performance due to a bad knee.

Another elucidating example is that of the Carolina Panthers’ Christian McCaffrey, who last year took the title of highest-paid running back in NFL history from the Dallas Cowboys’ Ezekiel Elliot, who himself took it from Gurley in 2019. This contract was preceded by his remarkable 1,000-1,000 yard season (1,000 yards rushing and 1,000 receiving), and he got through the first three years of his career without missing a single game. Last season, the first after his record contract, he missed 13 games due to an ankle sprain and shoulder injury, and this season he’s been out since week three after injuring his hamstring. It should be noted that McCaffrey, along with Derrick Henry, was one of the two highest prospects in this year’s fantasy football draft.

Obviously, the god of football—both real and fantasy—is a jealous one. Like the cosmic forces I read of in Herodotus’ narrative for my class, the universe allows neither running backs nor fantasy football owners to grow too great, striking them down in their primes. Also on display is the incredible randomness of football, a sport that sometimes feels as unpredictable as New England weather. Hopefully, Derrick Henry will be spared a fate that is beset by injury, and perhaps he’ll even return later this season and go back to scoring three touchdowns a game. In the meantime, I’d best check who’s available on waivers.