“The French Dispatch” Is Definitely a Wes Anderson Movie

This article contains spoilers for “The French Dispatch.” 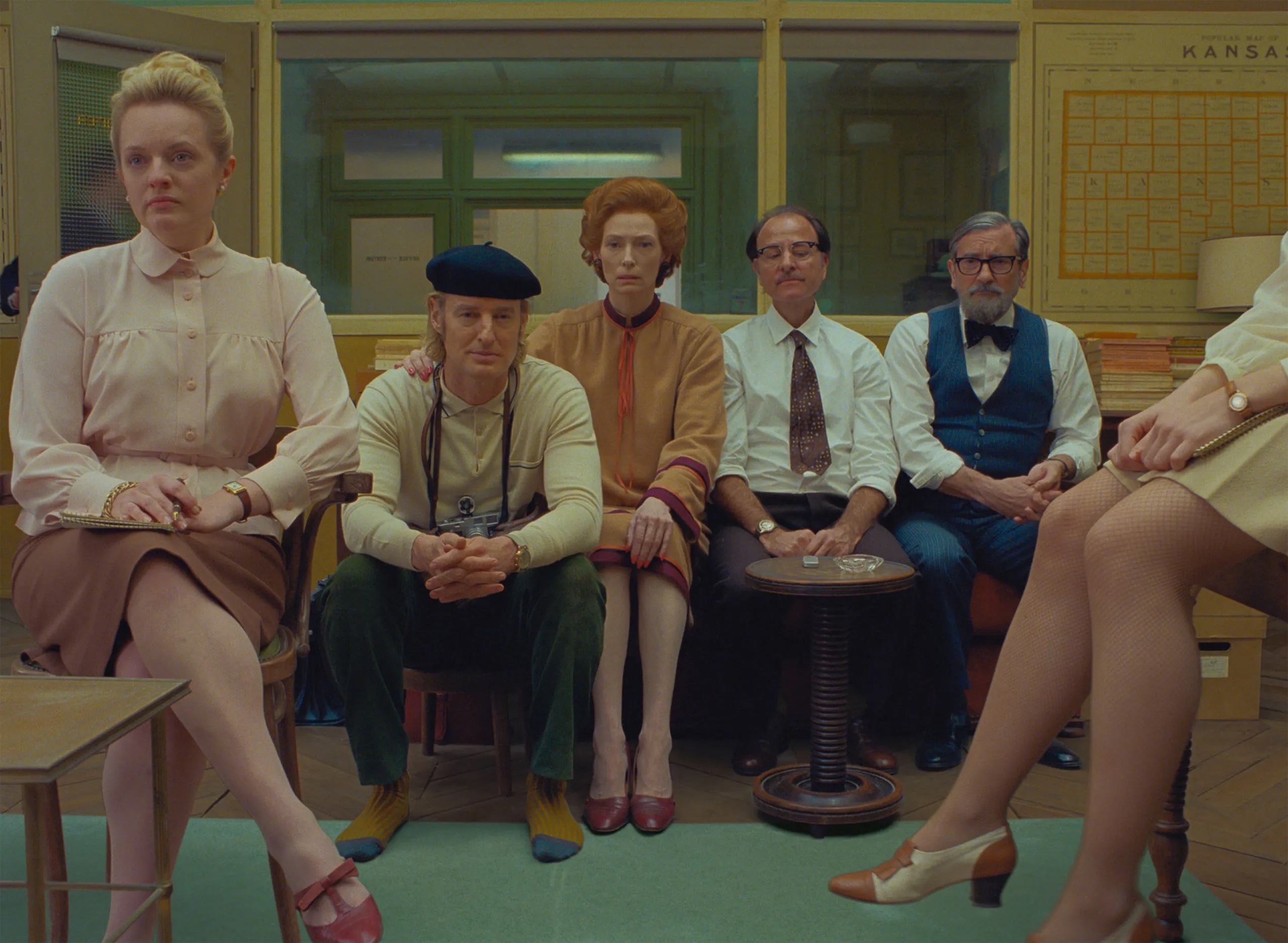 Perhaps the only certainties in life are death, taxes, and Wes Anderson making classic Wes Anderson movies. In his newest film, “The French Dispatch,” Anderson maintains his typical style as he constructs an anthological tribute to journalism peppered with members of a star-studded ensemble cast, many of whom are, as usual, long-time collaborators of Anderson’s.

Written and directed by Anderson, “The French Dispatch” will bring no stylistic shocks or surprises to any moviegoer who has seen a single one of his other movies. However, Anderson attempts an interesting switch of subject matter to a theme he has not tackled before—journalism—and uses the old and new faces in his cast to bring his story to life.

The film portrays stories from The French Dispatch of the Liberty, Kansas Evening Sun, a magazine based in the fictional French city of Ennui-sur-Blasé. The magazine is being permanently shut down following the death of its founder and editor, Arthur Howitzer Jr. (Bill Murray), and the movie depicts three articles and an obituary from the very last issue of the publication. Both the fictional magazine and its staff are based on stories and writers from The New Yorker, of which Anderson is a self-professed fan.

The film opens with the establishment of those basic details and quickly dives into the portrayal of the articles contained in the final issue, beginning with a brief travelogue titled “The Cycling Reporter.” Herbsaint Sazerac (Owen Wilson) takes the audience on a tour around the town of Ennui on his bicycle, setting the scene that underlies the following main three sections of the movie. Though short, Sazerac’s brief paints a descriptive picture of the Ennui of past and present, conveyed in typical Wes Anderson fashion.

The movie then depicts the three magazine stories, the first of which is “The Concrete Masterpiece,” narrated by writer J.K.L Berensen (Tilda Swinton). Berensen details the story of Moses Rosenthaler (Benicio del Toro), an artist who has been imprisoned for homicide. He finds a muse in prison guard Simone (Léa Seydoux), with whom he also becomes romantically involved. When art dealer Julien Cadazio (Adrien Brody), who is incarcerated in the same prison as Rosenthaler, sees his fellow inmate’s artwork, he quickly buys the painting. Once released, Cadazio and his uncles (Henry Winkler, Bob Balaban) get to work promoting Rosenthaler’s work to the rest of the art world. Three years later, Cadazio plans a secret exhibition at the prison, bringing in other high-status art lovers to discover that Rosenthaler has painted a series of frescoes on a concrete wall in the prison. The event eventually breaks into a riot during which Rosenthaler defends many of the attendees, resulting in his release from prison on probation.

The second story, “Revisions to a Manifesto,” is written by Lucinda Krementz (Frances McDormand), a journalist for The French Dispatch who reports on the student protest in Ennui, a throwback to the real-world 1968 student protests in France. The main character of her article is revolutionary student leader Zeffirelli (Timothée Chalamet), and though Krementz continually mentions in her narration that she is trying her best to maintain a separation from the subjects of the story for journalistic integrity, she becomes sexually involved with Zeffirelli and edits and re-writes the manifesto that he drafts. As the revolt grows to its height and the students reach a faceoff against the police, he is confronted by fellow student Juliette (Lyna Khoudri) about his relationship with Krementz. Krementz steps in to diffuse the situation, which prompts him to leave with Juliette as his new romantic interest. The story closes a few weeks later with Zeffirelli’s death as he falls from the tower of the student-made radio broadcast station.

The problem that Anderson runs into in these first two stories has nothing to do with the performances from the cast. As Rosenthaler, del Toro does an excellent job of leading this first section of the movie, aided not in small part by the equally intriguing performances from Seydoux and Brody. Chalamet, who has been having an excellent past couple of weeks following the opening of  “Dune,” is charming as the leader of the student revolt, and McDormand is typically compelling while Khoudri also delivers a genuine performance as the young Juliette, navigating her relationship with Chalamet’s Zeffirelli.

Rather, the issues of the first two-thirds of the film come from Anderson’s directorial and story choices. Throughout the movie, Anderson switches back and forth between black-and-white and color, which departs from the standard full-length color of his other feature films and calls back to his first short film, “Bottle Rocket” (1994), but it is not clear that there is anything to be gained from these shifts. The switch in color seems to mark shifts between the “present-day” of the journalist narrating the stories and the “past” of the time in which the action of the stories actually happened, but the unclear nature of this temporal contrast makes the color shifts more annoying than useful.

Additionally, Anderson’s treatment of the female characters in “Concrete Masterpiece” and “Revisions” is questionable at best and demeaning at worst. As Simone models for Rosenthaler in prison, Anderson has chosen for Seydoux to be fully nude for the duration of multiple lengthy shots that soon begin to feel gratuitous. Although he may be attempting to make a broader point about the concept of journalistic integrity, his insistence that Krementz is unable to abstain from sleeping with a student at the center of the story she is working on is intensely off-putting. Both of these stories are supposed to be written by female journalists of The French Dispatch, and the fact that Anderson has both Berensen and Krementz engage in sexual relationships with the central male figures of their stories (Berensen’s relationship with Rosenthaler, though not explicitly depicted, is clearly alluded to) paints a very specific image of the female reporters at this fictional magazine.

“The Private Dining Room of the Police Commissioner” is the last and by far the strongest story of the movie. Roebuck Wright (Jeffrey Wright), a food journalist for the magazine, is meant to write about a meal prepared by Lt. Nescaffier (Stephen Park), a renowned chef for the Ennui Police Department. Wright’s dinner with the police Commissaire (Mathieu Amalric) suddenly turns into a kidnapping when the Commissaire’s son, Gigi (Winston Ait Hellal), is taken by a group of criminals. As the police stake out the kidnappers, Nescaffier is allowed to bring in food for both the boy and the criminals and saves the boy. The food, which has been poisoned, takes out the criminals but also poisons Nescaffier, who is forced to taste it before the criminals partake in the meal. Though one criminal escapes, the Commissaire and Wright engage in a car chase that culminates in the reunification of the Commissioner and his son. Nescaffier also manages to survive, and the story ends with a conversation between Wright and the chef as he recovers.

This third story is notable amongst the three depicted in the movie, not just for the intriguing plot that drives the article, but because of the captivating performance from Wright as the food journalist moving the narration forward. He is wholly believable and emotional as he delivers the story from the perspective of a Black, gay American journalist reporting from France. As he retells the story of his article, Wright alludes to the way that his identity has not always been perfectly acceptable to the society of Ennui and also makes note of the connection he found with Nescaffier as two outsiders having to adapt to the French city (although Nescaffier’s background is not stated, Park is Korean American). Park, like Wright, is excellent in his role as the chef, and though the article itself is more about the adventurous tale of Gigi’s kidnapping than the chef himself, Nescaffier remains at the heart of the story at the very end.

These two characters stand out in a Wes Anderson movie, as the director’s portrayal of characters of color in the past has been tenuous, to say the least. The spiritual journey that the three brothers in “The Darjeeling Limited” (2007) take across India, the character arc of Margaret Yang (Sara Tanaka) in “Rushmore” (1998), and the treatment of Henry Sherman (Danny Glover) in “The Royal Tenenbaums” (2001) come to mind in particular.

This is not to say that these are bad movies, but that their depictions of characters of color hold them back from being as enjoyable as possible. The casts of Anderson’s previous films have also been almost entirely and glaringly composed of white actors, apparently because many of those actors are his frequent collaborators. It is, however, hard to ignore once you notice it for the first time. All of these factors make “The Private Dining Room” a refreshing change of pace for Anderson, and build off of the major roles that del Toro, who is Puerto Rican, and Khoudri, who is Algerian, play in the first two sections of the film, all pointing towards a broader inclusion of people of color in Anderson’s casts. Whether this shift in the portrayal of characters of color in his movies will continue is yet to be seen, Wright’s performance is undoubtedly the highlight of “The French Dispatch.”

The movie closes with an epilogue featuring the entire staff of the French Dispatch in Howitzer Jr.’s office as they decide to write his obituary for the final issue together, composing the words that served as the very beginning of the actual movie’s script. It’s a complete, full-circle moment that keeps the movie from losing itself in the complexities of the story, and also brings the magazine’s staff together into one room, connecting the journalists across the three pieces.

Anderson is at his best when the fastidiously-selected colors and heavy stylization of his movies become secondary to the emotional strength of the story itself, as he allows for in “The Royal Tenenbaums” or “Fantastic Mr. Fox” (2009). In “The French Dispatch,” Anderson centers plot and characterization the most in the third magazine story and the epilogue. With the best sections of the movie coming at the end, making it through the first two-thirds of the film is no simple task, even for those who have mostly enjoyed Anderson’s previous work. It is truly unfortunate that even the A-list leading cast in “The Concrete Masterpiece” and “Revisions to a Manifesto” is unable to make the first two stories more than bearable, but the final portions of the movie balance them out.

Helping out is two-time Academy Award winner Alexandre Desplat, who also composed the scores for Anderson’s “Fantastic Mr. Fox,” “Moonrise Kingdom” (2012), “The Grand Budapest Hotel” (2014), and “Isle of Dogs” (2018). Desplat once again creates a delightful soundtrack, which manages to be another one of the few parts of “The French Dispatch,” holding it all together.

In terms of celebrating journalism and recognizing the reporters at the heart of every newspaper, “The French Dispatch” is certainly no “Spotlight” (2015) or “All The President’s Men” (1976), but, in the end, Anderson manages to put together a movie that can indeed be called a journalistic film. It is not his best work, but in some crucial ways is an improvement from his previous films and utilizes a talented cast in order to turn the stories of a fictional magazine into a generally enjoyable movie.