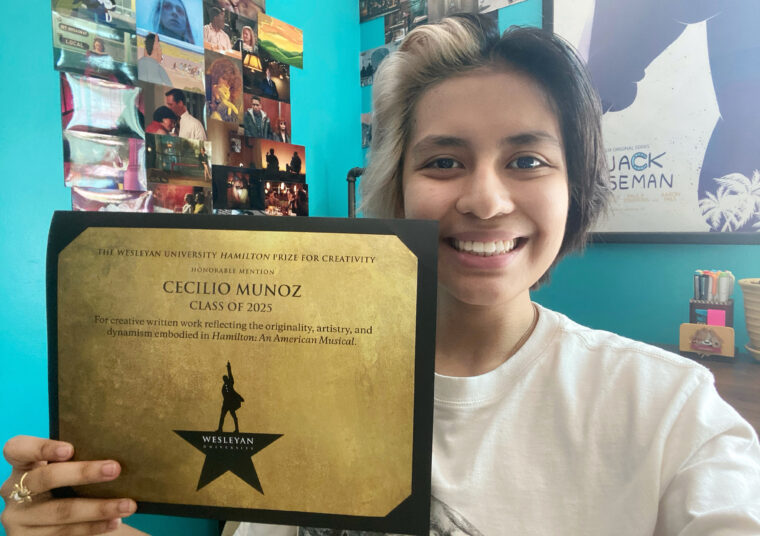 It’s a well-documented historical fact that pandemics, and the resulting isolation at home, often give way to creative and intellectual masterpieces. Both Shakespeare and Sir Isaac Newton created some of their most impressive accomplishments—King Lear and a theory of gravity, respectively—during bubonic plague outbreaks, and let’s not forget Taylor Swift’s epic 2020 album duo of Folklore and Evermore during the COVID-19 pandemic. This year’s Hamilton Prize for Creativity winners Audrey Nelson ’25, Nolan Lewis ’25, and Cecilio Munoz ’25 are no exception. All three of them spent their unprecedented high school experiences honing their artistic talents. The prize, which annually rewards creative written work by incoming students that best reflects the “originality, artistry, and dynamism” of Lin-Manuel Miranda ’02’s “Hamilton: An American Musical.”

This year, two honorable mentions and $5,000 stipends were awarded to Nolan Lewis ’25 and Cecilio Munoz ’25, and a four-year, full-tuition scholarship was granted to Audrey Nelson ’25.

Munoz, of Worcester, Massachusetts, submitted a sample script from a television series he is working on. He wrote scenes that take place in the pilot and penultimate episodes.

“The scene is supposed to be the moment when finally, after so many years, [the protagonist] says what she’s been meaning to say to her son,” Munoz said. “This scene is what drives her own son to finally leave his own family, and to finally separate himself from that toxicity and abuse.”

Munoz explained that writing the scene was emotionally taxing, but proved to be therapeutic.

“When I finished writing this script, I had a bit of a ‘what-have-I-done’ moment,” Munoz said. “It’s still probably the darkest thing I’ve ever written.”

Beyond the scene, the series has a total of 33 planned episodes across three seasons, a large cast of characters, and storylines that span decades. Munoz first conceived of the idea years ago, and has been working on it as an ever-evolving project since.

Munoz said he first heard about Wesleyan when the University was satirized on Netflix’s “Bojack Horseman.” He started doing more research, and became increasingly interested when he realized the University was a place that fostered and encouraged creativity.

“I had kind of a generic idea of where to go [to college],” Munoz said, “but then I came across Wesleyan and I realized it might be the best for me as a person.”

Munoz plans to continue his creative work throughout college and beyond.

“I definitely do want to dabble in directing, either for theater, even film or television,” Munoz said. “I still do want to consider acting…and playwriting. Recently, I’ve kind of been into reading up on [Dante’s]  ‘The Divine Comedy, ’ because I’ve been thinking about writing a screenplay where a character dies and doesn’t really know what happens: hell looks the same as everything else, so it’s even more upside down.” 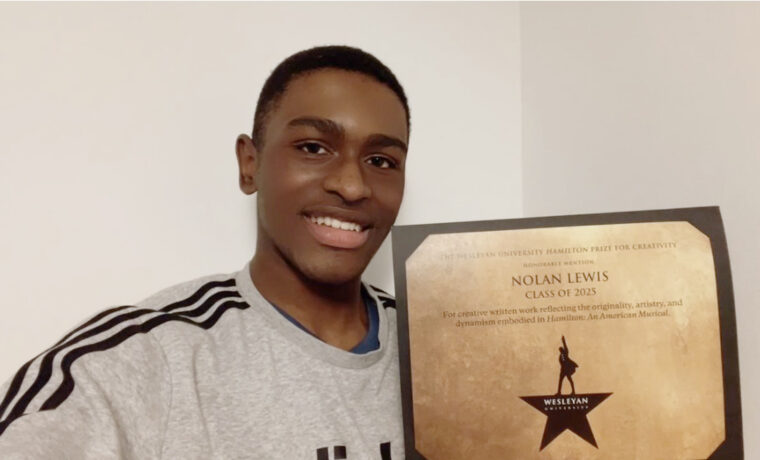 Lewis, of Washington, D.C., submitted five songs and their lyrics, earning an honorable mention. A prolific songwriter and producer, he described himself as someone who is always working on some sort of creative project. In high school, he tried to put out an entire album every year.

The songs he submitted varied in tone, sound, and personal significance. He compared “Zoom,” which is about online school during the pandemic, and “Ride,” which is about immediate physical attraction to someone, to Doja Cat’s work. According to Lewis, “Newdawn Newday Newage” and “B.G. B.S.N.S.S” demonstrate his lyrical prowess and songwriting abilities. “Intro,” the first song on his newest album, Lewis explained, represents a new era of his music-making.

Initially, Lewis said that he felt a bit unsure about the idea of submitting his music.

Ultimately, he decided that there was no harm in trying. After all, he reasoned, Lin-Manuel Miranda ’02 himself is a rap artist. It turned out that Lewis’s decision served him well.

“I think it was a unique submission,” Lewis said. “I figured it would be a nice differentiator, it’s something I’m proud of, and if it didn’t work out, I still did it and that’s something to be proud of.”

In his free time, Lewis will continue to write and produce music.

“Whenever I’m ready, I have a whole ten-track album to put out,” Lewis said. “But I want to wait until the studios are dry [after the flooding] so I can access them, because I want to try re-recording.”

In the meantime, he has been exploring other musical genres.

“Part of the reason why I haven’t released [my new album] yet is because I started doing more neo-soul stuff, and I was like, this sounds really good, I wanna do this more,” Lewis said. “I guess I have one and a half new things that I’m working on right now.”

Nelson, who is from Bainbridge Island, Washington, wrote a short story called “Complications” about a woman who gives birth to a bird.

“The conceit of the story was criticizing society making women move on too fast from their grief after they have miscarriages, abortions, stillbirths,” Nelson said. “And so the bird flying away at the end was the representation of the grief, leaving at her own pace.” 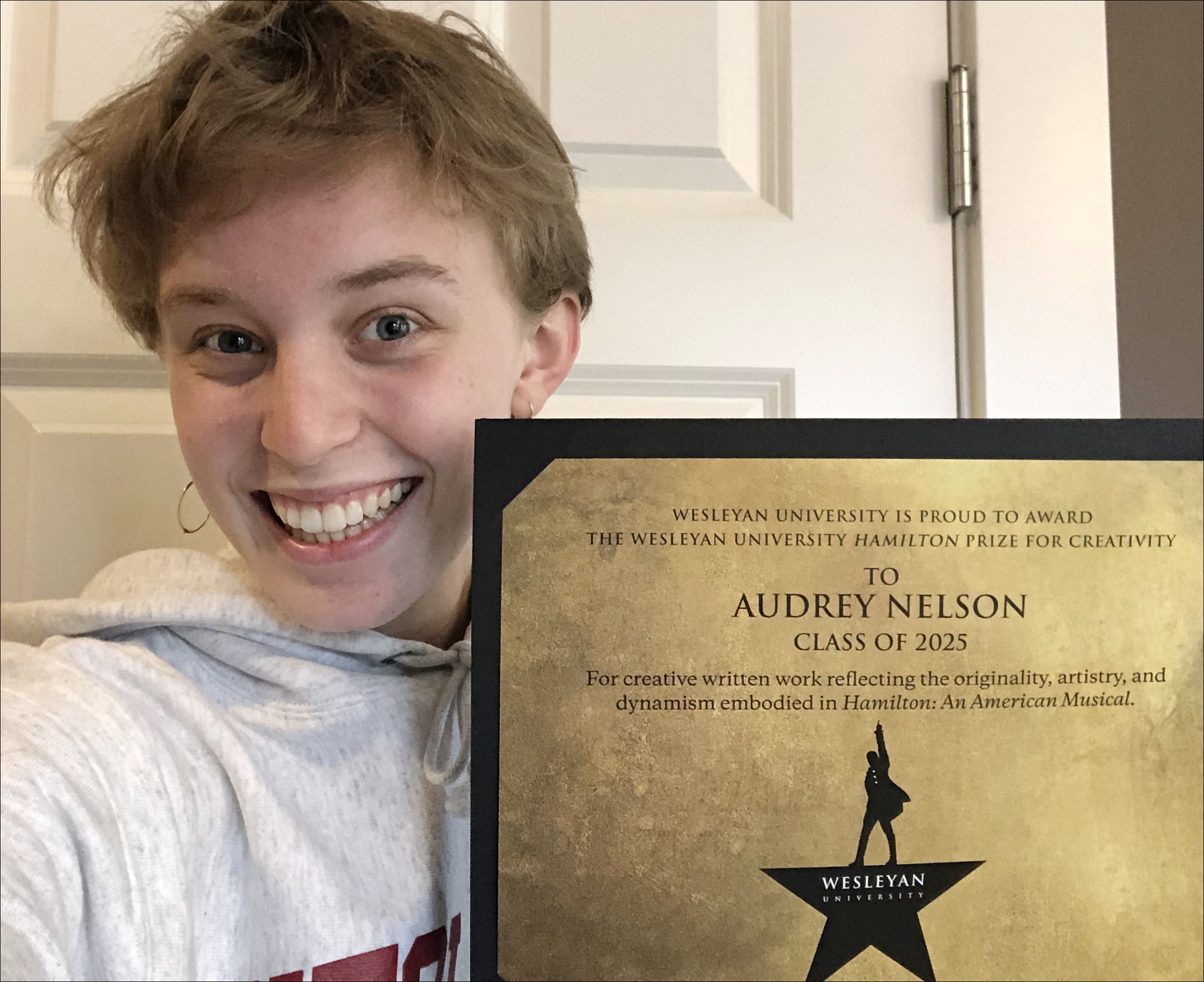 Nelson started writing when she was only five, explaining that she grew up in an environment that always encouraged reading and writing.

“There’s just always a lot of books and writing and literature around in our house,” Nelson said. “The family had this old, boxy Dell computer, and I would sit at the kitchen table and poke out stories page by page.”

She started “Complications” for a tenth-grade English final project.

“I left it until the last day, and then I sat down and wrote basically the bones of what would become the story,” Nelson said. “It was missing scenes, it was missing narrative arc, but it was all the same pieces. I wrote it in an hour or two, [like a] fever dream, spitting it out.”

As the submission deadline for the Hamilton Prize approached, Nelson said that she panicked, not knowing what to submit.

“I had a meltdown in my kitchen,” Nelson said. “And my parents were like: ‘You’re submitting something. Just go find something. We don’t care how bad it is. Just turn it in. It’s okay. You’re not going to be embarrassed.’ And then I dug through my Google Drive and found it again. And then spent another hour of fever dream, sitting on my bedroom floor, adding the new scenes, and then turned it in that night.”

Obviously, her efforts were successful. The selection committee loved the piece; Miranda called it “delightful and moving.”

Though Nelson was thrilled to win, she mentioned that it did add some pressure to continue producing work at such a high level.

“It’s internal pressure,”  Nelson said. “The feeling is: I will never write anything as good as that again.”

However, these anxieties certainly aren’t going to stop her from writing in the future.

“I started a project to write odes every day,” Nelson said. “So, I pick a small thing about the world and I write a little poem about it every day.”

When picking schools, Nelson, who doesn’t yet know what she wants to study, liked that Wesleyan focused on the arts. So far, she’s loved it here.

“[It’s been the] best week of my life,” Nelson said. “You’re looking out for yourself and are completely independent. And I didn’t realize how much I wanted that feeling or didn’t have it until I got here.”