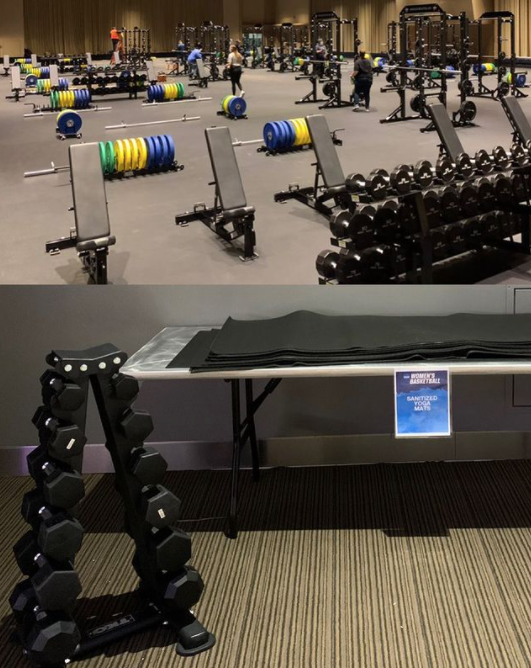 Perhaps the biggest event in all of college sports is the March Madness basketball tournament. This year, unfortunately, the games have been overshadowed by the disgraceful practices of the National Collegiate Athletic Association’s (NCAA) blatantly sexist housing and facility choices.

When the men’s and women’s teams arrived in early March at the tournament in Indianapolis and Texas respectively, it was immediately apparent that the men’s teams were being given significantly better treatment in all aspects of their stay.

It was a now-famous TikTok made by Oregon basketball star Sedona Prince that truly brought this disparity to light. Prince showed pictures of both the women’s and men’s weight rooms, from the pathetic single rack of dumbbells the women received to the fully equipped college facilities which the men’s tournament sported. This TikTok, which now has over 3 million views, sparked outrage across the sporting and specifically the basketball community.

“In regards to the NCAA wbb tournament weight room that looks like it belongs in a senior care facility… it’s inexcusable,” wrote WNBA player and former Notre Dame University student-athlete Brianna Turner. “It shows that they didn’t care. It shows it wasn’t a priority.”

The NCAA Vice President of women’s basketball Lynn Holzmann released a statement after pictures of the respective weight rooms emerged.

“We acknowledge that some of the amenities teams would typically have access to have not been available inside the controlled environment,” the statement read. “In part, this is due to the limited space and the original plan was to expand the workout area once additional space was available later in the tournament. However, we want to be responsive to the needs of our participating teams, and we are actively working to enhance existing resources at practice courts, including additional weight training equipment.”

In addition to the weight rooms, there was a clear difference in the merchandise and food given to the men’s and women’s teams. Men’s teams were treated to a wider array of March Madness apparel and swag, as well as more impressive dining options, whereas women’s teams received a more meager selection of both clothes and meals.

The NCAA President Mark Emmert’s response was as follows:

“I will be calling for an independent review to closely examine the circumstances surrounding the events that transpired in San Antonio. This review will also include an analysis of the allocation of financial and human resources, facilities, and decision-making processes and procedures to ensure that all student-athletes are equally supported at our NCAA championship events.”

For many, Emmert’s words ring shallow. The history of inequality in college athletics is long and frustrating. In 1999, the Supreme Court ruled that Title IX does not apply to the NCAA, despite many of their member institutions collecting money from federal sources. Of course, for anyone who has been watching college sports coverage or tried to find a women’s basketball game on ESPN, this is no surprise.

It is unfortunate for the women, many of whom worked their entire life to get to March Madness, that their time there was burdened with the fight for equality. The tournament itself has been a classic one so far. The games have been competitive, with the most controversy being generated on a late no-call in the Baylor University versus University of Connecticut (UConn) Elite Eight matchup. Something unique to this year is the fact that many teams outside the top four reached the Sweet Sixteen, signifying both the strength throughout the bracket and exciting upsets that occurred. Perhaps the most surprising game of the tournament occurred when No. 4 University of Arkansas was upset by No. 13 Wright State.

The final four includes three number-one ranked teams. Of course perennial juggernaut UConn remains, along with Stanford University, The University of South Carolina, and The University of Arizona filling out the rest of the final four. The semifinals will take place April 2 at 6 p.m. (Stanford vs. South Carolina) and 9:30 p.m. (Arizona vs. UConn). It is a shame that the competitive basketball could not take place without the backdrop of the systematic disenfranchisement of women’s sports.

This wasn’t about space, as evidenced by a follow-up TikTok from Prince showing an updated weight room that was installed two days later. It was about the rampant inequalities that exist between men’s and women’s sports. It’s not surprising that this occurred, given the historical lack of attention and care given to women’s sports teams and funding. At the very least, however, it has started a conversation about what needs to be done. What matters now is whether this conversation is sustained not only by female athletes but by everyone in the athletic community, from administrators to male athletes.