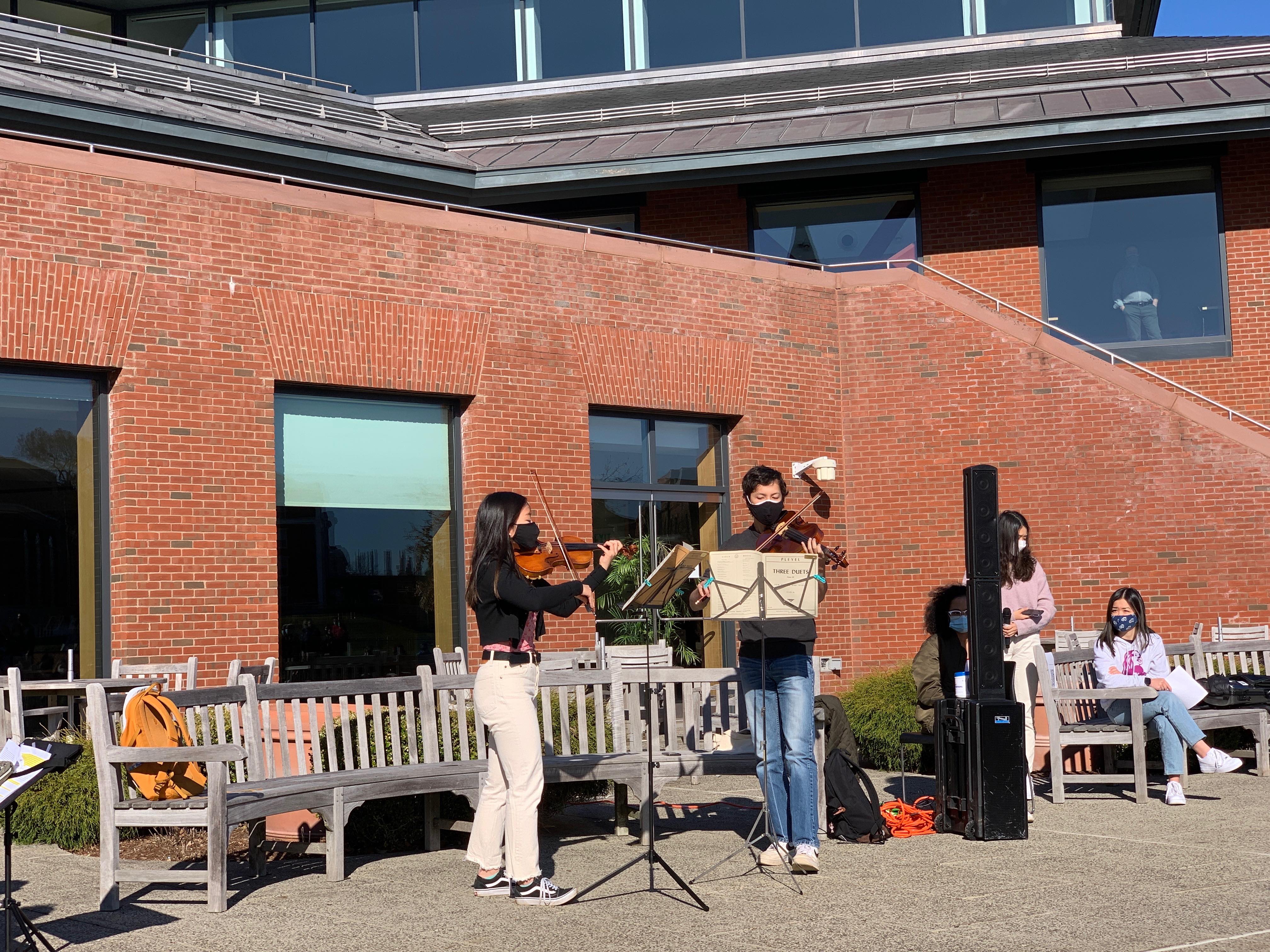 Students held a community vigil outside Usdan University Center on Tuesday, March 30 to grieve the lives lost in the Atlanta spa shootings on March 16, and to provide a safe space for healing amid the recent surge in anti-Asian violence. At the beginning of the vigil, around one hundred students were in attendance, but that number increased to around two hundred students, who gathered between Andrus Field and the outside of Usdan University Center.

The shootings occurred when a white man opened fire in three spas or massage parlors in the Atlanta area. Six of the eight individuals killed were Asian women. The vigil, organized by Emily Chen ’23, Kevin Le ’22, and Emily Moon ’21 alongside members of the Asian American Student Collective (AASC), created a physical space for Asian and Asian American students to come together and listen to each other’s thoughts and feelings about the tragedy.

At the very beginning of the vigil, Chen held a minute of silence for individuals killed in the Atlanta shooting and explained that they would not be reading their names out loud. Organizers explained that some family members of the murdered had not given consent to have their names be publicized nationally. Still, the speakers emphasized that it is important to learn how to correctly pronounce the names of the victims in order to correctly honor them.

“When we, as the Wesleyan Community, honor the victims of the Atlanta shooting, it is important to remember that they are not merely an Instagram post that you share or a simple topic that you talk about for brownie points,” Shihyun (Will) Lee said at the event. “Speaking their names just simply isn’t enough. Learn how to pronounce their names with the respect and dignity they deserve.”

Following the moment of silence, Kate Luo ’21 and Henry Lin-David ’21 opened the vigil with a violin musical tribute, followed by readings of two Asian American professors who spoke about their experiences identifying with the victims of the attack. The rest of the event consisted of poetry and article readings related to the rise of Asian American and Pacific Islander (AAPI) hate crimes in the U.S. and the world. This was followed by Asian and Asian American students from various class years speaking about the outrage and emotional toll the shooting has had on them, along with the sadness and fear associated with their racial, ethnic, and national identities. At the end of the vigil, organizers encouraged anyone in attendance to speak. The event was live-streamed over Facebook for those unable to attend in-person.

Early in the event, Associate Professor of English Marguerite Nguyen’s remarks were read aloud by a student. Nguyen’s speech spoke to the historical roots of Asian American hate crimes, using modern memoir-related pieces of literature like Ocean Vuong’s “On Earth We’re Breifly Gorgeous” and Sarah M. Broom’s “The Yellow House” as points of departure to discuss the U.S.’s discrimination of Asian immigrants, as well as Asian American lynchings, throughout the 19th and 20th centuries. Nguyen ended her speech by calling for students to remember the lives of those lost in the tragedy.

“It is essential to take the time and space to mourn the lives lost and remember them as full human beings who had multidimensional lives, not solely as the victims of a mass murder that brought their names to light,” Nguyen wrote in her remarks.

The killings in Atlanta are only the latest in a long line of racially-motivated violent crimes and bigoted rhetoric against Asians and Asian Americans. Such racism has significantly increased since the beginning of the COVID-19 pandemic. While the vigil was primarily organized in response to the recent shooting, students and faculty speakers emphasized the long, ongoing history of anti-Asian violence rooted in America.

“Anti-Asian violence stems from dehumanization,” Le wrote in an email to The Argus. “When people don’t see you as human, don’t recognize your face, don’t know you by your name, see you as ‘foreign’ and ‘other,’ gloss over what you say, ignore the fact that you have a life just as rich and full as they do, it becomes easy for such people to think that my life is not as valuable as theirs.”

Along with Nguyen, Professor of East Asian Studies Yu-ting Huang told the students gathered at the vigil about the difficulty she experienced in the days after the shooting.

“It was one of those times that you woke up feeling personally attacked, angry, but powerless,” Huang said. “Like many of you, I believe, the Atlanta shooting hit me hard because I recognized myself in the victims, I recognize my experience in that particular form of racist and sexist attack, because I have known it in my time being in the States as an Asian-looking woman.”

Chen emphasized how vital the vigil was for helping Asian and Asian American students process and heal, especially in the midst of balancing the demanding schedule of being a Wesleyan student.

“The vigil was really a space for healing and for people to share really spontaneously how they’re feeling and how they’ve been processing Atlanta,” Chen said in an interview with The Argus. “It’s been two weeks, but the wounds are still very fresh. That grief, and the rage, and whatever emotions people are holding about it deserve to be held in and of itself.”

Chaiyeon Lee ’22, one of the co-chairs for the AASC, voiced her internal struggle as a leader during this time.

“How can I, someone who can’t even process and validate my own thoughts and feelings be in a position to offer this much needed support and solidarity to my friends and family?” Lee said at the vigil. “How can I, someone who doesn’t even know what they wanna eat for dinner, demand a list of actions and statements from the institution and the greater Wesleyan student population? How can I lead this community during these times when the stakes are so much higher than they’ve ever been? I struggled with these thoughts for a while now, and I’d definitely be lying if I said I wasn’t still struggling with these thoughts.”

Le emphasized the necessity of having a space to express the anger and disappointments felt both personally and communally by Asian and Asian American Wesleyan students.

“Without the vigil, people wouldn’t be talking about anti-Asian violence, namely against Asian women,” Le wrote. “Necessary, because I myself am Asian.”

Chen added that she felt immense frustration at the lack of activist response by white students in the aftermath of the Atlanta shootings, which is part of what led her to organize the vigil.

“I just felt angry at the physical space of campus, that [white] people weren’t talking about it, that white people could just go about their lives,” Chen said. “In the few days after Atlanta, I was really aware of appearing as an Asian woman.”

Minutes after many members of the student body came together to support its Asian and Asian American members, an anti-Asian hate incident occurred that brought these vigil’s discussions even closer to the campus community. Shortly after the event, the Office of Public Safety (PSafe) sent out a campus-wide email detailing that an Asian student was crossing the intersection of Washington Street and High Street when a vehicle containing two middle aged men slowed near him and the passengers began yelling racist slurs.

“Middletown Police and Wesleyan Public Safety responded immediately and are actively investigating the incident,” Director of Public Safety Scott Rohde wrote in the email. “If you have any information relevant to this matter, please call Public Safety at 860-685-2345. If you see suspicious activity or encounter any concerning circumstances, please report it immediately.  In the event of a life-threatening emergency contact 9-1-1 right away.”

“I just keep thinking about how we couldn’t even have 16 minutes to feel completely and totally safe and happy with how everything was,” Chen said. “It was so much to process both of these things at once. And we’re exhausted. It feels similarly to how it was after Atlanta, just having everything be so much. But it’s also different, because it’s happening right on campus…It’s no longer thousands of miles away in Georgia or New York City. And if we don’t stand up and address this in a way that is meaningful and that actually stands for Asian and Asian American people on this campus, then we just can’t do that.”

Bryan Chong ’21, one of the students who spoke at the end of the vigil, recounted his experience encountering racism while attending school in the United States for seven years.

Students emphasized the need to stand up to such racism within the community and beyond.

“We must continue to organize and fight, with love and compassion for ourselves and others, for radical change in the structures of this country,” Ethan Park ’24 wrote in a reflection that was read at the vigil by another student. “We fight not just for our own communities, but for every single person who has been marginalized and dehumanized throughout this nation’s ugly history.

Park also wrote about the fear he feels for his family’s safety in the wake of the shooting and the growing anti-Asian violence.

“There’s a feeling of profound grief that washes over me whenever I think about all of this too much—a paradoxical type of grief that’s both distant and all too close to home,” Park wrote. “It’s that nagging feeling that arises when one of the victims shares my last name. It’s that messy concoction of fear and loss when I see my own grandparents reflected in the eyes of a 74-year-old Korean immigrant, shot while trying to provide for her family. It’s the unbridled rage when a tragedy like this is blamed on a ‘bad day,’ and the grim realization that an inevitable prerequisite for conversations about race in America is the death of innocent people of color.”

In his remarks, Park reiterated that everyone in the community holds a responsibility to combat this growing racism.

“We are all responsible, we are all accountable, we all have crucial roles in the fight for a more free society, rooted in justice and empathy,” Park wrote. “From this point we move forward, using this pain as fuel for more change, more understanding, more consciousness, and ultimately, more love.”

Gloria Kang ’22 also emphasized the collective importance and responsibility of speaking up, both on and off Wesleyan’s campus.

“We must speak up and have conversations to grow,” Kang said. “We must take the time to reflect and learn about the roots of racism in this country and think about how we are perpetuating systemic racism. We must understand that racism is culturally constructed. It is about human dignity and humanization.”

Clarification: In her interview, Chen specified that her judgement was directed at white students and not at non-Asian BIPOC students. This article has been updated and Chen’s quotes have been punctuated to reflect this context.

AASC shared a google document of AAPI resources that is available to everyone with a Wesleyan University email, and is available here.

Shihyun (Will) Lee ’23 is an Assistant Arts and Culture Editor at The Argus.