From the Grounds Up, Espwesso Reopens After Year-Long Hiatus 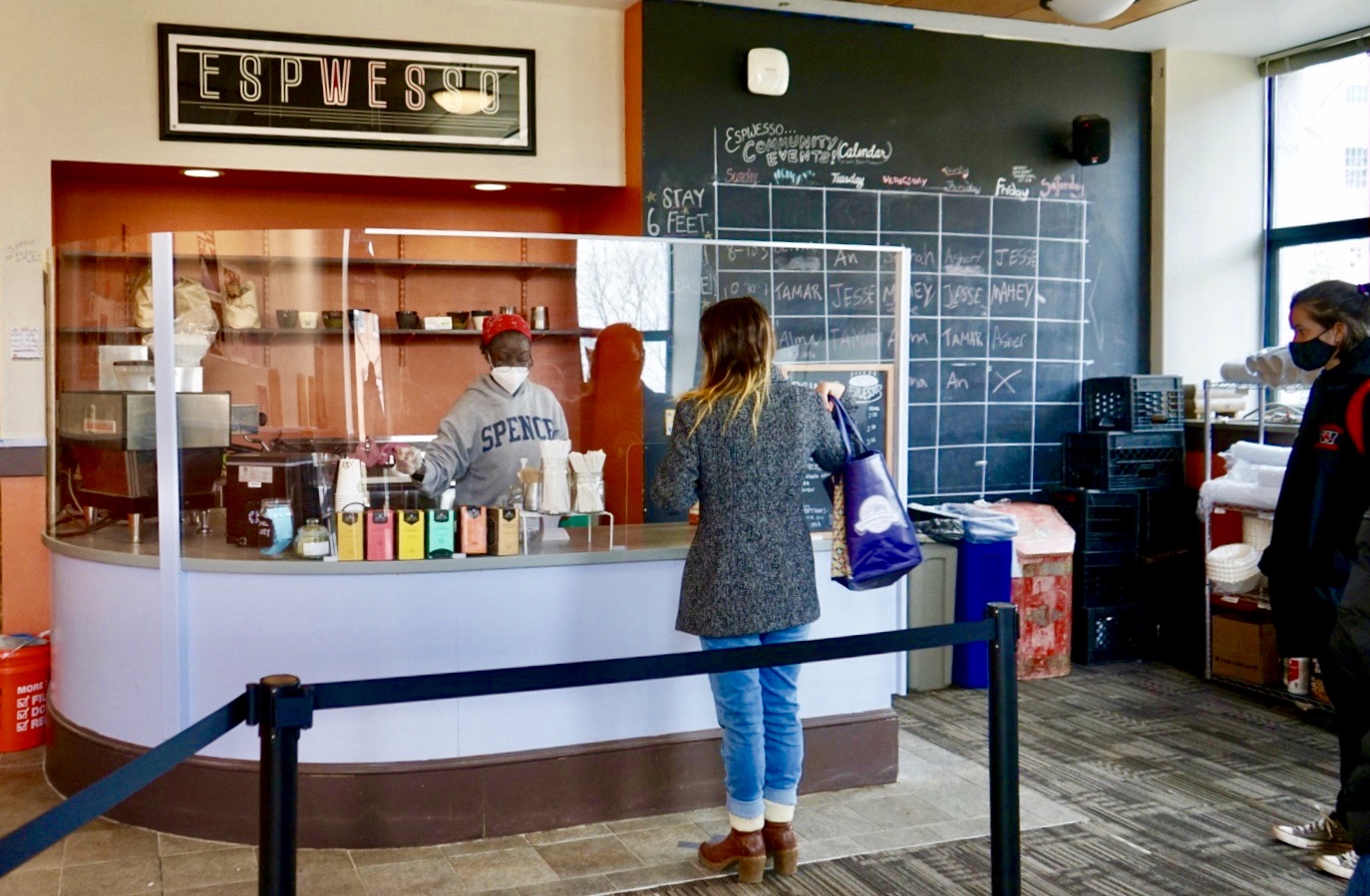 Espwesso, the University’s student-run cafe, reopened on Monday, March 15, nearly a year after its last reopening.

After experiencing difficulties with Connecticut’s Public Health Code in January 2020, the cafe was shut down again when the University suspended all on-campus activities on March 11, 2020. Since then, Espwesso has been vacant, with no signs pointing to when the cafe would return.

“Last semester, it was just really not feasible,” Espwesso General Manager Tamar Cahana ’21 said. “I wasn’t on campus, and a bunch of other staff members weren’t on campus, and it just was too big of a project. And I think this semester the cafe’s changing in a big way, mostly because we’ve been closed for a year, and so we’re coming back to a different campus environment, obviously, and the different demand…It’s an ever-evolving kind of space, whether that be socially or financially.”

“It’s definitely been a journey this semester,” Financial Manager Shanna Henry Phillips ’22 said. “And not only on getting everything together and figuring out how we can introduce ourselves to underclassmen who haven’t really gotten a taste of what Espwesso is or haven’t been to our cafe yet…but also because of [COVID-19], our usual methods of passing down information and passing the job to the next person wasn’t the smoothest transition…so it’s been interesting for us to figure out our new roles in the cafe.”

Despite adjusting to new roles, the Espwesso managers have taken a particular interest in the quality of coffee they serve.

“We see ourselves now as a cafe that’s going to serve high quality coffee that we hope will be accessible to all students,” Cahana said. “We still feel strongly about our distributors and having locally sourced coffee and locally sourced milk and taking pride in our ingredients, and that will never change. We hope that, if anything, being takeout-only, that will accentuate our dedication to making good coffee.”

Per COVID-19 restrictions, the cafe has also made various changes to its menu. Like Pi Cafe, Espwesso’s menu is limited to drinks that facilitate as little exposure as possible.

“We’re not selling espresso or any specialty drinks per [COVID-19] requirements, so we’re going to be focusing a lot on drip coffee, and we’ll also be serving chai, cold brew, and just regular tea,”  Cahana said.

In addition to altering the type of coffee it serves, Espwesso, which typically serves as a social space for students to gather, has shifted to adapt to the social ramifications of the COVID-19 pandemic.

“Espwesso has historically been this space where students come and sit and chat, and it’s very open and a friendly and warm environment,” Henry Phillips said. “Because of [COVID-19], we no longer can have students drink in [Espwesso] or just come to hang out, which a lot of people [used] to do. So that’s been a difficult shift, but we’re trying to create ways so we can still be seen as a familiar, warm space without people having to sit in the space physically.”

Espwesso also aims to promote itself as a space for everyone on campus.

“We also wanted to open up the space to a wider demographic as well because coffee shops are also historically white spaces,” Henry Phillips said. “I’ve also partnered with a Black-owned coffee shop, so we’re getting our beans from there, as well as our usual place. We’re just trying to open up the space more so it’s not put in this little box. We want people to know that it’s a space for everyone.”

The managers also hope that the cafe will still be engaged with the student art scene, both on-and-off-campus.

“We hope to do Zoom events,” Henry Phillips said. “And still have concerts and bring in artists from around campus.”

Additionally, they feel confident in the student body’s positive response to the cafe’s reopening.

“We definitely do feel excitement and a demand from students for us to open, which is really exciting and makes us that much happier to keep working,” Cahana said.