Espwesso Resumes Operations After an 18-Day Closure, Looks Towards Renovations 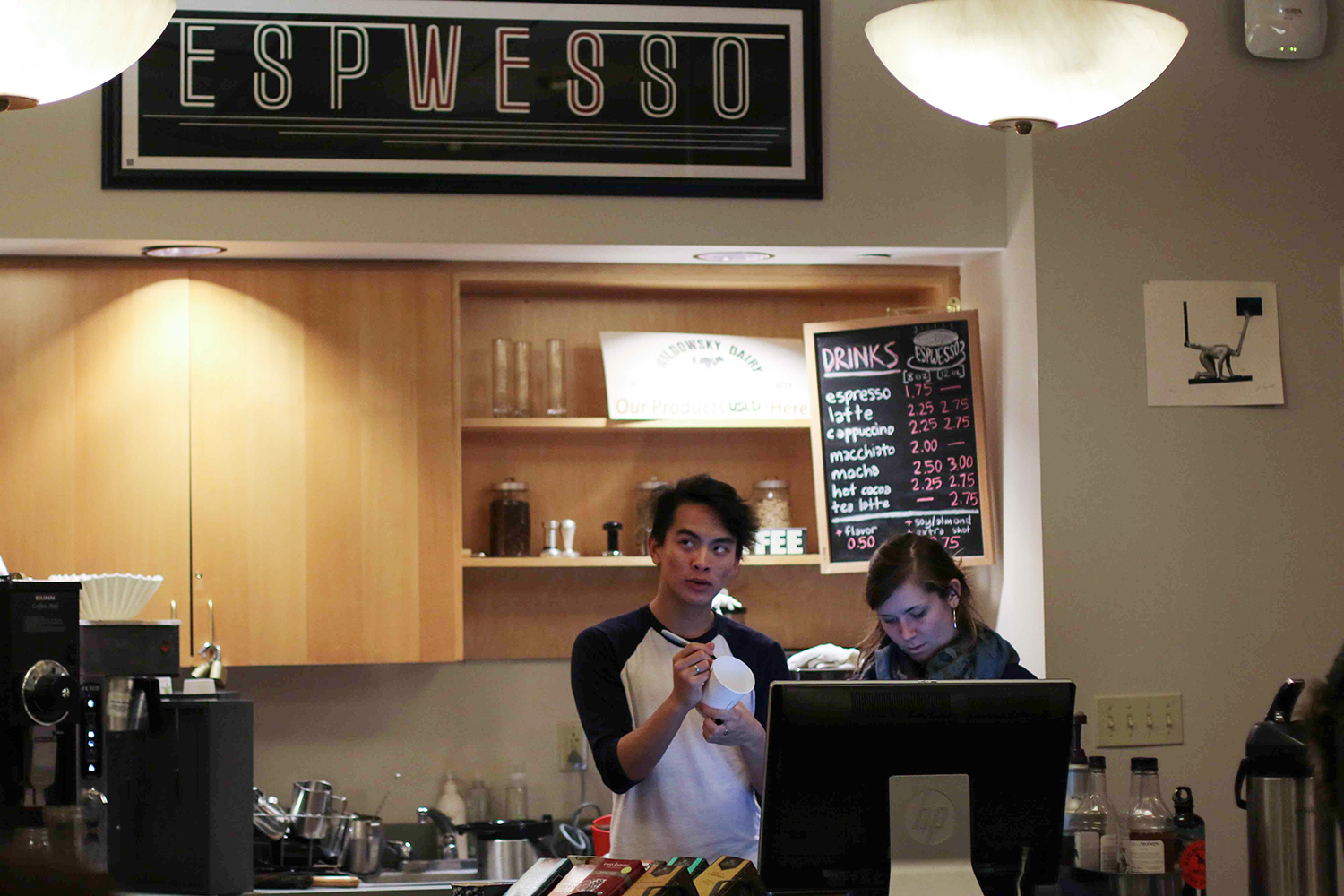 Espwesso, the University’s student run café, held its opening night on Monday, Feb. 10. The café did not open at the beginning of the spring semester as it usually does, after confusion surrounding the Connecticut Public Health Code requirements prompted Espwesso to close and reevaluate its operations. After weeks of deliberation with alumni, the University, and the Health Department, Espwesso confirmed that it could legally re-open.

“The rumors are true: we’re open for business,” the Facebook event created to celebrate the café’s reopening read. “Join us Monday night for a chill, informal ribbon-cutting.”

Towards the end of last semester, Espwesso attracted the attention of the Middletown Health Department during their quarterly checks of the University’s dining locations. Director of Usdan University Center Michelle Myers-Brown, who serves as a liaison between students, Bon Appétit, and the University, coordinated an informal inspection of Espwesso on Dec. 10, 2019.

“In the hope of waylaying a problem, we called a meeting with the Health Department and the student leadership so that the City would understand new students were running the space and could use some guidance,” Myers-Brown wrote in an email to The Argus. “Following that meeting, the health inspector inspected the cafe space while giving the students advice on what needed to occur to bring the area up to code. They did not call it a formal inspection, but it was a facility review. Based on that meeting we received an email from the Health Dept. Director indicating that until those changes were made that Espwesso would need to remain closed.”

The renovations required to bring Espwesso up to code cost an estimated $9,870. According to the University Construction Services’ Project Manager Angela Wong, these renovations involve installing a three-basin dish-washing sink and a separate hand-washing sink for employees.

Upon receiving the estimate last semester, Espwesso managers Saam Jalinous ’20 and Carina Bolaños Lewen ’20 attempted to seek funding for these renovations. The almost $10,000 would have put considerable strain on an already difficult financial situation for the café. Last fall, Espwesso faced cumulative financial difficulties—unrelated to the renovations—and, as a result, held two fundraising events and took out a loan from the Student Budget Committee (SBC) amidst potential bankruptcy.

“The response we got last semester to the ‘Save Espwesso’ campaign was so overwhelming,” Jalinous wrote in a message to The Argus. “It only took one fundraising event to raise the money to get out of debt.”

“The Middletown Health Department did not conduct an inspection of Espwesso,” Elak wrote in an email to The Argus. “We were asked to assess the current state of the café and provide feedback on modifications that would need to be made in order bring the café up to current CT Public Health Code requirements.”

However, as a non-profit and non-commercial organization, Elak explained that Espwesso is exempt from the majority of the Connecticut Public Health Code requirements.

“This means that they [Espwesso] are not required to secure a license from the local health department,” Elak wrote. “The only stipulation mentioned in the CGS [Connecticut General Statutes] is that the person(s) distributing food (or in this case beverages), maintains the food at the proper temperature to inhibit the growth of infectious or toxigenic microorganisms.”

Therefore, Espwesso could open this semester without completing the recommended renovations. After clarifying these details with the University as well as Espwesso alumni, Jalinous and Bolaños Lewen began coordinating Espwesso’s reopening. Additionally, in a meeting with the University Financial Office on Monday afternoon, the University agreed to go forward with the renovations anyway, most likely over the summer, without the need for fundraising or SBC loans.

“While not technically required by the Health Department, the Administration would prefer the space be brought up to code to ensure the safety of the patrons visiting Espwesso,” Myers-Brown wrote. “In our meeting [on Feb. 10th], we told the student leadership of Espwesso that the University would fund all the capital improvements recommended by the Health Department.”

Both Jalinous and Bolaños Lewen expressed relief following their most recent meeting with the University, with their primary concern being the staff’s job security.

“The greatest stress of it all was that we had ten work-study employees that were out of a job,” Jalinous said. “Above everything, above figuring out what was happening with the University, our biggest priority was to get back in operation so that we could give people their jobs back.”

Myers-Brown also told The Argus that in their meeting with Espwesso managers on Monday Feb.10, the University and Espwesso agreed that the café would work with a faculty or staff advisor to help them develop their business model, including potential afternoon hours.

“We feel pretty committed to continuing our position as an alternative, late-night hangout space,” Bolaños Lewen said. “We really want to preserve that late night time, but we know there’s been a lot of demand for afternoon hours, and afternoon hours appear like they would be more lucrative for us, so that’s something that we do want to continue to discuss.”

“I grew up enjoying the kind of coffee shop offerings and culture that Seattle has to offer amply, and I think that in general Espwesso is one of not-so-many study spaces on campus that aren’t a library,” Bolaños Lewen said. “I do remember not being able to figure out the hours when I was a freshman, or not knowing that it existed and then coming across this gem of a place staffed by the most wonderful people.”

Bolaños Lewen cited the alumni who had first introduced her to the café as the reason why she persisted in reopening Espwesso.

“The staff community is something that has been really valuable to me over the years,” she said. “I felt that throughout this whole process of really wanting to make sure we stayed [in business] because of all of those individual people I had worked with who had made it that space.”

Additionally, Bolaños Lewen did not receive any payment for her work for Espwesso this semester. Having partially enrolled to work on her thesis, Bolaños Lewen no longer qualified for the work-study position.

“Carina has just been doing a lot of this work out of the goodness of her heart,” Jalinous said.

Correction: A previous version of this article stated that the Feb. 10 meeting took place between Bon Appétit, the University, and Espwesso. Bon Appétit was not involved in these negotiations.