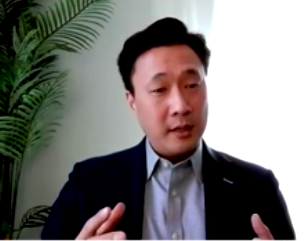 The pandemic has entirely changed the way people live their lives. It’s something that everyone has been forced to come to terms with since the first COVID-19 case last spring. But scientists are still uncovering just how far-reaching the pandemic’s effects will be on their research. Peter Park ’93, PhD, a North America Regional Medical Lead at Pfizer, has witnessed the pandemic’s impact on clinical research firsthand. Park works within Pfizer’s biopharmaceutical department, managing research teams that conduct studies on prescription medicines. Park specializes in internal medicine, a branch that deals with cardiovascular disease, respiratory disease, neuroscience, and pain medicine. In 2020, Park led a team conducting research studies on medicines that had previously been approved by the FDA or other federal agencies. Although Park’s team was not directly involved with work on Pfizer’s vaccine, the pandemic still impacted its work.

“A lot of what we do is interact with hospital partnerships, and the hospitals basically could not do anything besides deal with patients,” Park said. “All projects were more or less put on hold. My team did have a period where they were wondering which projects were going to proceed.”

Park has seen the pandemic affect his field in other ways as well.

“It certainly has affected every area of clinical medicine,” Park said. “For the diseases that we work on … a lot of people aren’t going to get certain diagnostic tests. Vaccinations are really, really down [in distribution] for the other areas like measles, mumps, rubella [as well as] certain types of hospital visits that you’re supposed to have. I think there is going to be lasting change to try and address that.”

Park’s interest in medicine was sparked by his parents’ experiences living in South Korea before immigrating to the United States in the 1970s.

“I always had this reverence for medical drugs,” he said. “In the seventies, South Korea was pretty third world. If you got even a routine infection, chances [were] you were toast. I kind of inherited that reverence for pharmaceutical medicine from my parents, so this was just a natural fit for me.”

That initial interest led Park to major in chemistry while attending Wesleyan from 1989 to 1993. While at the University, Park played as a setter for men’s club volleyball, participated in plays in the theatre program, and served as a Health Assistant in the Butterfields (a position similar to that of an RA).

“I absolutely loved attending Wesleyan,” Park said. “I have really fond memories and I still keep in touch with the people from my frosh year in Foss Nine [now Hewitt 9] and they’re all doing really incredible things.”

During his time at the university, Park conducted chemistry research for about two years under the direction of Emeritus Professor of Chemistry Pete Pringle, whose lab studied the far-infrared spectroscopy of ring molecules like diboranes (chemical compounds consisting of boron and hydrogen). He completed a senior thesis in the Pringle lab on the environmental chemistry of soil pollutants.

“I’m also indebted to [Joshua Boger University Professor of the Sciences and Mathematics] Stewart Novick,” Park said. “He taught me how to really enjoy thinking about science. That’s something I cherished about the chemistry department.”

When Park was first in college, he planned on being a professor. Regardless of the career he eventually pursued, he knew that he wanted to complete education in chemistry beyond a Bachelor’s.

“With the bachelor’s degree, I kind of felt like, ‘alright, I understand chemistry,’ but when I would meet other people, I realized ‘okay, I have no idea how much more depth and breadth there is to this discipline,’” he said. “At that point in my junior year, I realized that if I wanted to be someone who’s influential in this industry or even academic science, I would have to get a Master’s and a PhD.”

A week after graduating from Wesleyan, Park started as a student in the graduate chemistry program at Princeton University. Park found some aspects of the transition from Wesleyan to Princeton to be challenging at first.

“When I got there, I really didn’t fit in,” Park said. “I felt like ‘this place is so conservative, there’s so much focus on money.’ But I found that once I tried to focus on the research, I came to appreciate that there was a tremendously high level of scholarship at Princeton just as [there] always had been at Wesleyan. I sort of needed to refocus on why I was there.”

Under the guidance of Suzanne Walker, who now serves as Professor of Microbiology and Molecular Genetics in the Department of Chemistry and Chemical Biology at Harvard University, Park completed his dissertation on the topic of molecular drug targets designed to overcome antibiotic resistance. After graduating from Princeton, Park knew he didn’t want to continue conducting research. He took a job as a Management Consultant at the consulting firm Accenture, where he stayed for six years before starting at Pfizer as a Global Director of Project Management. Eventually he moved to his current position of Medical Director.

“I was doing cardiovascular trial management, and I realized, ‘Wow, I think I would like to work on a team that manages getting new drugs approved,’ so I moved to one of those teams,” Park said. “It can be fun working for a big company if you like doing different things because you just move to different teams that track their own set of diseases that they’re trying to make medicines for. I’ve kind of hopped around a bit.”

Park emphasized how his time at Wesleyan prepared him for work in industry and beyond.

“Wesleyan really helped me learn how to think,” he said. “Not what you should think, but how to deconstruct questions. That’s been a really great attribute in my career. So much has changed in the last year for everybody, but I’m hopeful that the desire for innovation and social equity and doing as much as we can to improve the global communities around us hasn’t changed. That’s something that really does connect me back to Wesleyan and my time there.”