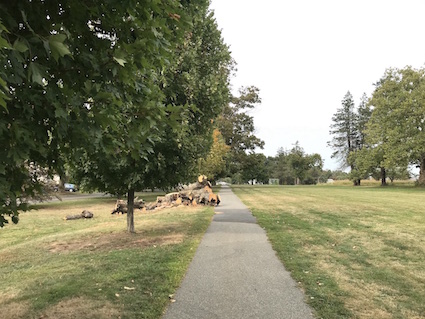 They’re everywhere and they’re terrifying. Aliens? No, it’s people who are capable of running in the winter. The moment the temperature dips below 45 degrees, my lungs can’t take it anymore, and I opt for indoor workouts. But there are some people who are able to push through gross, freezing weather in order to get out there and run. Even more surprising: there’s some people who actually like to run in the cold. Why? How? The Argus sat down with a few of these tenacious runners to hear their thoughts on winter running.

Maddie Nagler ’22, a member of the Wesleyan’s track and cross-country team, is familiar with the grind of training. She’s one of the rare few who actually finds that there are enjoyable parts to running outdoors in the winter.

“I actually do really like it,” Nagler said. “A lot of people don’t. I love when I’m done, and I come in, and I’m freezing, and I can take a shower and make myself a hot chocolate. It’s more the after feeling than the during. When you’re on the last little bit of your run and you know you’re almost done, if I was in a bad mood before then, I end in a good mood because of that.”

Others disagreed. Adam Jackson ’23 picked up running this year as a way to get exercise when he couldn’t play club soccer due to an injury, and as a way to pass time during quarantine. For him, running outside when it’s this cold is more of a chore.

“It’s a challenge,” Jackson said.“It’s not too bad on like 50 degree days, but it’s definitely hard to get motivated when you have to bundle up, and it’s cold. and you don’t want to go.”

Rose Griffin ’21 has been running since high school as a way to stay in shape for other sports, but became more serious about it when she came to college. She’s accustomed to the sometimes harsh New England climate, but that doesn’t make outdoor activity in the winter a walk in the park, either.

“I’m from Maine, so I’m used to the cold,” Griffin said. “I definitely enjoy running when it’s warm out more. It’s harder to get out, and I don’t usually run for as long…. I still enjoy it for the same reasons. I’d say it’s harder to motivate myself.”

Even those who enjoy running during this bitter season can admit that it comes with some risks.

“It’s definitely more painful than summer running,” Nagler said. “You have to be careful of ice. I’ve fallen a lot.”

The weather also requires runners to make sure they have the appropriate clothing and gear, though in certain cases it’s not for the reason you might think.

“The sun sets so early, and we practice at 4:30 so we have to wear these flashing vests when we run at night, which is not awesome,” Nagler said.

Additionally, there are a lot of new aspects, both good and bad, specific to running in the winter during a pandemic.

“Besides wearing a mask and getting used to that, I’ve seen more people out running this past year,” Griffin said. “I think people took it up when they were home as a way to get outside and do something to move on their own and then coming back to Wesleyan kept that habit.”

“I also think this year…it’s hard to breathe in the winter,” Nagler said. “Plus adding masks to that, it’s rather challenging. You just know you’re going to be sucking it in.”

What’s the best season to run in? Fall or spring according to these runners.

“I have bad allergies in the spring, but I love the feeling of outdoor track when you know it’s about to be summer,” Nagler said.

“It’s very pretty outside, and it’s just to the point of when, [if] you hit it at the right temperature, you’re not really sweating too much, but you’re also not cold or uncomfortable overall,” Jackson said.

“I think the fall. It’s often the perfect temperature in terms of not too hot, not too cold, and the leaves are changing. Especially running around here, running around Wadsworth in the fall is so pretty,” Griffin said.

The students interviewed generally agreed that snow can make for some beautiful scenery, but there were disagreements over whether running in the snow is actually enjoyable or more of a nuisance.

“I really don’t like running in the snow because it’s harder, and you’re using all those stabilizing muscles more so you can’t go as fast, and you’re like, ‘I shouldn’t be tired, I’m going so slowly.’ You have to work harder,” Griffin said.

Nagler, on the other hand, enjoys snowy conditions.

“I really like when it’s snowing,” Nagler said. “I think it’s really beautiful.”

How does Nagler get through tough spots with weather? She shared one tip that she uses to keep herself moving forward.

“Even when it’s gross conditions, I kind of pretend I’m in a Nike commercial,” Nagler said.