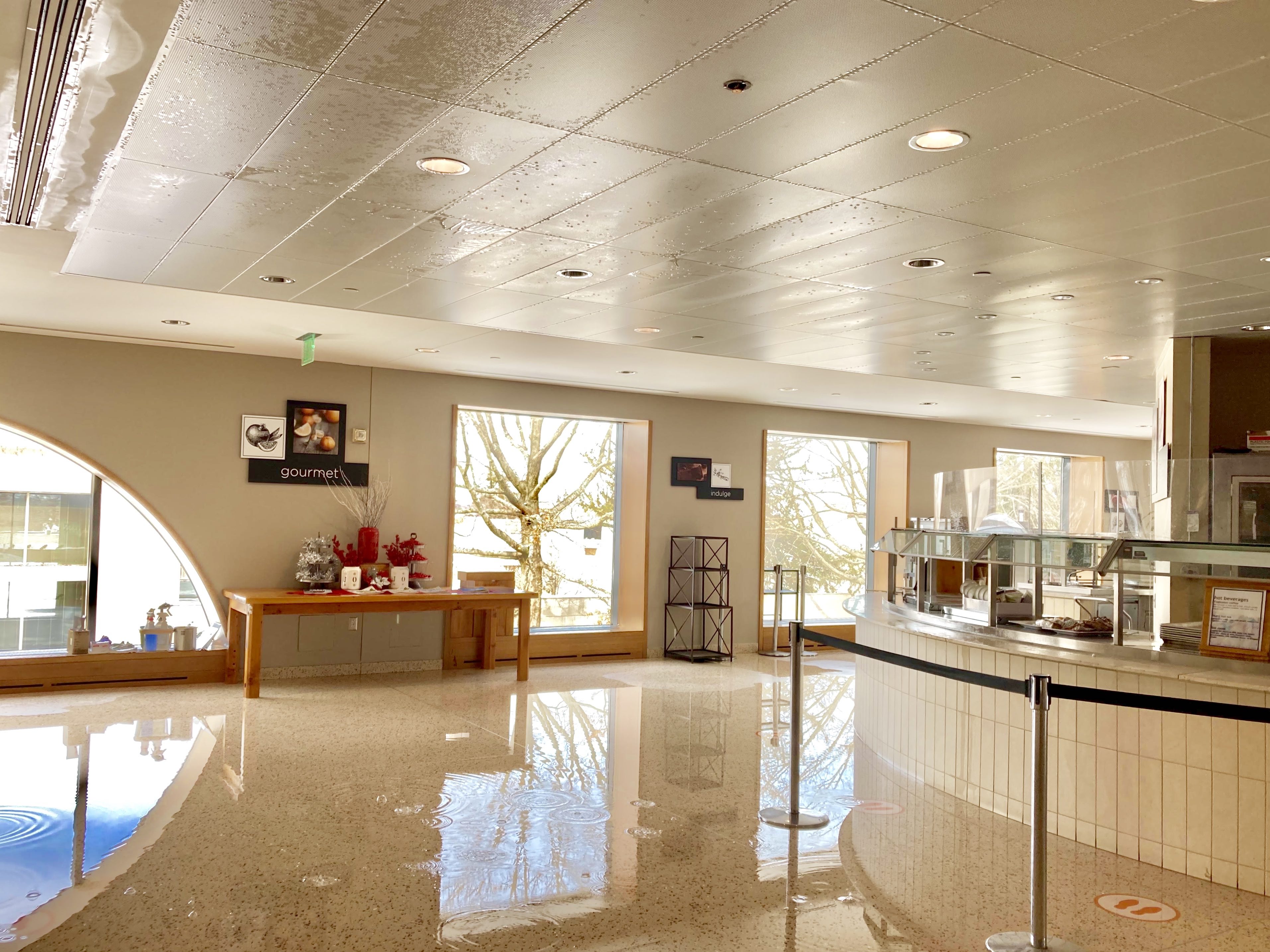 Usdan University Center (Usdan) flooded on Dec. 19, damaging a large portion of the building. Among the most damaged areas is Daniel Family Commons (DFC), the faculty and staff dining space on the third floor, and Usdan Marketplace, the dining hall on the second floor. According to Associate Vice President for Finance Chris Olt, the total cost of repairs will be approximately $200,000.

The flood was the result of a steam coil catastrophic failure in an air handler in the building’s basement. Air handlers are a part of the heating, ventilation, and air-conditioning (HVAC) system, and are responsible for regulating and circulating air flow. The failure released a large amount of steam throughout the ductwork, activating the third floor’s sprinkler system and fire alarm and flooding the building.

“Nobody knew that the sprinkler head had gone off,” Director of Physical Plant Operations Mike Conte explained. “When they initially came, the fire department responded to that first call that set off fire alarms. And because the smoke detectors got wet, you can’t reset them. So they left the panel in kind of a state of limbo. It wasn’t really active. It wasn’t sounding up any alarms.”

“All the players in terms of contractors were: RESCON doing the clean up and demo, Morrison Developers doing building repairs, Schultz Electric assisting Morrison where electrical items were a concern, JCI (formerly Simplex Grinnell) did fire system, sprinkler system and hood fire suppression repairs/testing, Total Lighting fixed emergency lighting system, Otis Elevator, SMG did final cleaning, Flow Tech fixed kitchen hood exhaust, Melink also helped with that as they handle the control side of hoods, and an army of in-house folks ranging from electricians to ITS staff were party to repairs as well. AZ Corp performed mechanical work to get HVAC system running, and Van Zelm engineers oversaw design of the modifications AZ Corp performed,” Conte wrote in a follow up email to the Argus.

Daniel Family Commons will remain closed this semester due to the extent of damage, but the rest of the building has been restored and can be used as usual.

The closure of the DFC also required Bon Appetit staff to find alternatives for that space. 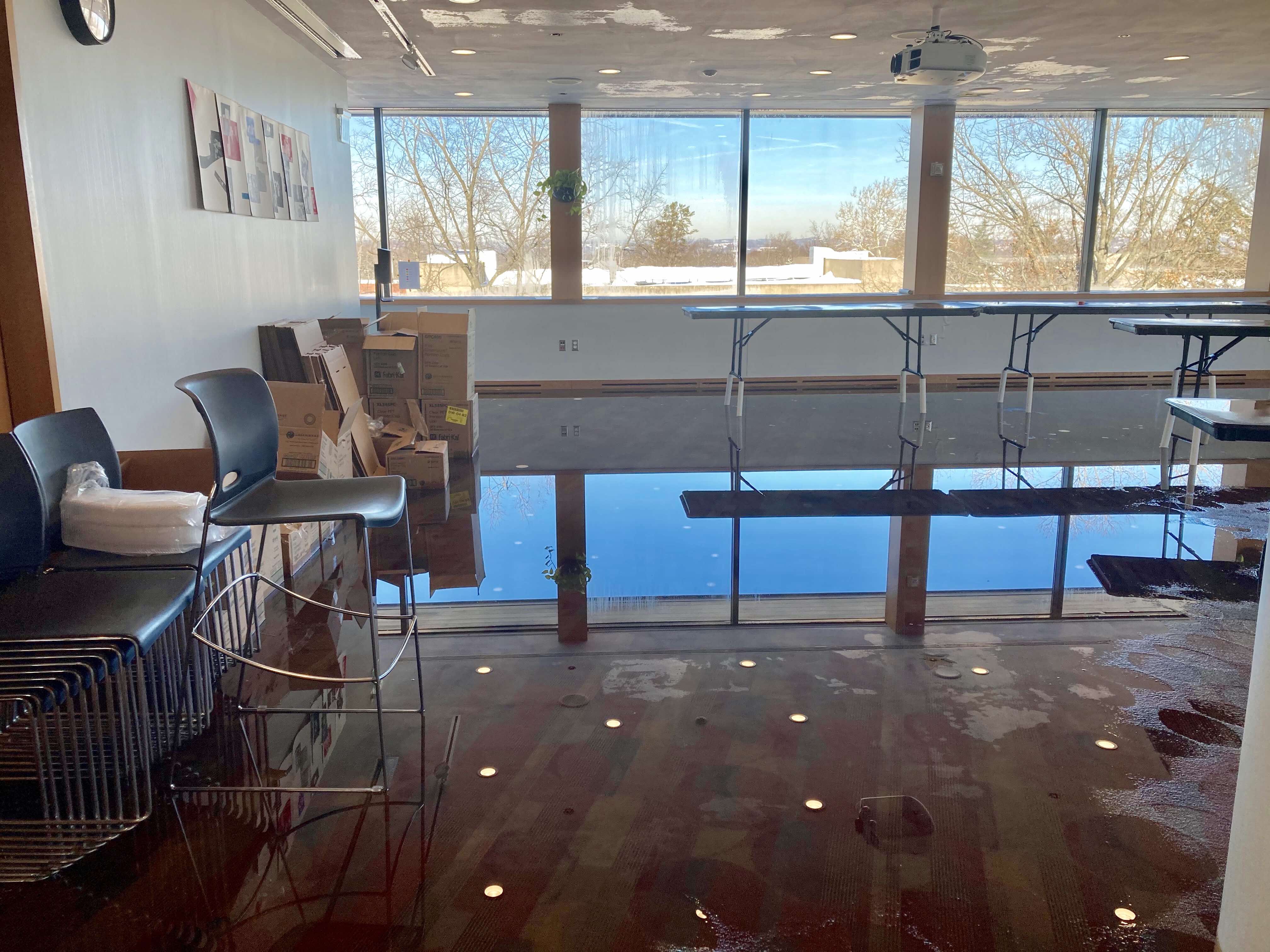 “Students may not realize this, but the Daniel Family Commons, because we couldn’t use it as a restaurant for the faculty and staff [during the] fall semester, we actually had turned it into a food prep space because so much for our food has to be packaged,” Director of Usdan Michelle Myers-Brown said. “So now the multipurpose room in the basement of Usdan and one of the music rehearsal rooms has been turned over to Bon Appetit for this semester.”

While most parts of Usdan are now fully functional, the air handler is still not completely fixed.

“The air handler that lost the coil, you can’t just buy one of these coils, it’s the size of the back of a tractor trailer,” Conte explained. “You don’t just go to Home Depot and buy one of these coils and there’s no way we could’ve gotten one. So we had to come up with some creative ways, creative engineering shall we say, to get heat restored to the building.”

Rather than replacing the air handler, Physical Plant will continue monitoring the system until the summer, when they will convert the building’s steam pipes to hot water as a part of the University’s goal to achieve net-zero greenhouse gas emissions by 2035.

“There was no point in expending money to repair something that was going to be replaced fairly soon anyhow, it didn’t make sense,” Myers-Brown explained. “And so they changed our timeline for the building.”

The expedited timeline will not affect pipe conversions of other buildings.

“A portion of Usdan was already converted from steam to hot water this past summer and we are currently working on the design to convert the rest of the building,” Project Engineer Andrew Plotkin wrote in an email to The Argus. “We had originally planned to finish the conversion of Usdan within the next 2 years.”

Myers-Brown emphasized how fortunate they were given the circumstances that very few students were on campus and that most of the damage was minimal.

“If we were going to plan for something like this, it was like the best possible scenario, given the timing and given what happened, Myers-Brown said. “I mean, it wasn’t an easy fix, but it could have been so much worse. The water seemed to center itself in the Marketplace. It wasn’t near the windows. And so we had just a little bit of drywall damage. You’d probably never even notice.”

Myers-Brown also praised the hard work and immediate action of everyone involved.

“Everybody was really good partners with us, Physical Plant, SMG, Usdan staff, Bon Appetit, and these companies…they were here within hours and they worked through Christmas and New Year’s,” Myers-Brown said.

“The in-house staff did a fantastic job responding, they always do,” Conte said. “One thing they excel in is responding to a crisis. If it wasn’t for them getting things stabilized, if we didn’t have them around, it would have been a nightmare.”