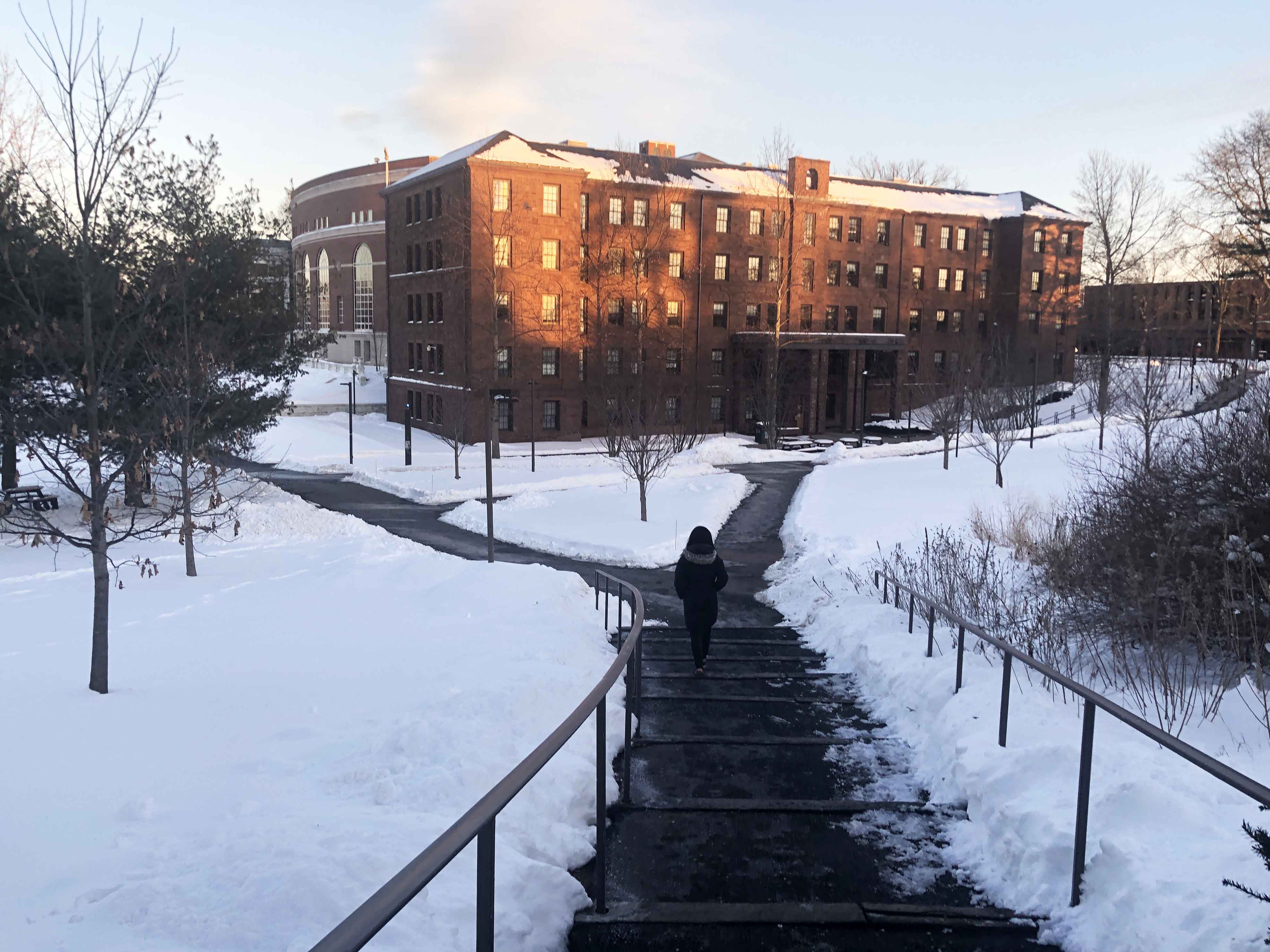 The first day of classes on Tuesday, Feb. 9 marked the end of an unusually long winter break. Normally, students return to campus after Thanksgiving break, not returning home until mid-December, and then Spring semester classes begin in late January. This extended break was part of the University’s COVID-19 safety effort to prevent an influx of cases after Thanksgiving gatherings and limit the time spent on campus during the colder months of the year.

So, how did students spend all of this free time away from the University? The Argus spoke with six students to find out.

Emma Dhanda ’24 got right to work, taking advantage of the break by editing her novel. Dhanda began writing the book in November with NaNoWriMo (National Novel Writing Month), an online service that rewards users for reaching a daily word count on their literary projects. However, winter break gave her the opportunity she needed to polish up her writing.

“I had a lot of time to just deep dive into what I had written and edit it and start looking for publishers and agents,” Dhanda explained. “Most of my time over break was spent fine-tuning what I had written.”

Dhanda’s story, entitled “Sea Glass,” is about a near-death encounter between a siren and a human, and she is excited to bring her research and knowledge of mythology to her classes at the University.

“I’m taking a class called Myths, Monsters, and Misogyny,” Dhanda said. “I expect that that kind of writing that I enjoy will come in handy since we’re analyzing books that are based off of mythology, and the book that I wrote was sort of in that same vein.”

Dhanda is currently waiting to hear back from publishers, but she hopes that her novel will be available for purchase soon. If it does not get picked up by any publishers, Dhanda plans to self-publish.

Other students used this time to work on internships. Charissa Lee ’23 continued an internship with Khazanah Research Institute, one of the largest public policy research institutes in Malaysia, that she began during the fall semester while studying remotely.

During her internship, Lee worked with two different supervisors on various projects. Her first supervisor was Malaysian economist and professor Joe Moore.

“I acted as his research assistant,” Lee said. “He was doing research and write-ups on the Covid-19 virus, the vaccine, and Malaysian political instability and economic recovery.”

The second supervisor was doing research on foreign direct investments and international trade agreements, and the collaboration presented Lee with new opportunities.

“I initially worked as a research assistant, but I ended up co-authoring a paper with her, which was pretty interesting,” Lee said. “I integrated that research project into my final econ[omics] project for last semester as well, [and] I could see real life applications in the research that I was doing.”

The two-month break also gave students the necessary time to work on starting up new clubs and organizations. Audrey Mills ’23 worked with friends to kickstart a Middletown chapter of the Gather Project, a group that works to make film education more accessible across the country.

Mills discovered the organization last semester, and knew that she wanted to bring it to Middletown.

“I thought, hey, I am super interested in trying to make film more accessible and make film education more approachable,” Mills said. “Why don’t I try to start a chapter of this up at Wesleyan? Winter break was when we finally had time to let it all coalesce, when people finally had time to join and meet multiple times a week and try to get some things off the ground.”

Mills plans to major in Film Studies at the University, and working on the Gather Project has provided her with the confidence to pursue her passion.

“Despite being a film major, I’ve always been very intimidated by film here because it seems so big and official and intense and academic,” Mills said. “I’m coming at it from a place of enthusiasm, not a place of expertise, so meeting more people who are really enthusiastic about it through the Gather Project has made me a lot more confident.”

Mills is excited to share this experience with other people who are interested in film at all levels.

“This is something I can do and it’s something I’m allowed to be interested in even though I can’t name every director and every film movement and things like that,” Mills said. “I’m just learning as much as I can about it at my own pace alongside all of these other lovely people, and I think it just made everyone involved feel a lot more valid in their film interests.”

Several other students used their break to engage in politics, campaigning for the Georgia runoff election. Mahey Gheis ’22, David Lepelstat ’22, and Joseph Cohen ’22 worked on a door-to-door campaign with an organization called Seed the Vote to ensure Georgia residents were registered to vote in the runoff election.

Cohen explained that the decision to campaign was spur of the moment, and was introduced to him by a friend.

“One of my friends told me about this organization working with Unite Here to bring down out-of-state volunteers to the Atlanta suburban area,” Cohen said. “I texted Mahey, asking if she wanted to join, and then David came and joined us a little bit later. We were going door-to-door anywhere from fifty to a hundred doors a day, trying to make sure that Democrats were ready to vote in the runoff election.”

The time away from school pushed these students to step out of their comfort zones and try something new that they knew would help make a difference.

“When Joseph texted me, I had absolutely no plans for the break and it was kind of daunting to think about,” Gheis said. “I think that might be part of why I was like, ‘definitely,’ unreservedly. I was like, ‘okay, I’ll go,’ because I had nothing else [to do], and it was an amazing experience.”

Cohen felt similarly, and was immediately interested when one of his friends reached out to him about the organization.

“I feel like after months and months of being in quarantine, for the first time it was like, ‘we are needed and we can make a difference,’” Cohen said. “I didn’t have to think about it for 30 seconds. It was like, ‘of course, this is the thing to do,’ and it was a great opportunity.”

Like other students, this experience away from the University enhanced the way Gheis, Lepelstat, and Cohen view their academic interests. Gheis and Lepelstat are Government majors, though all three have taken classes in the Government department.

“I’m double majoring with sociology and I’m taking American Political Thought this semester,” Gheis said. “I’m definitely interested to think about the foundational rationale for why we got to that moment, and it was really cool to talk to people and see politics on that scale instead of just observing data on people.”

Lepelstat had similar realizations during his time in Georgia.

“I definitely think a lot of the things I learned in Wesleyan government classes, I saw firsthand in Georgia,” Lepelstat said. “We’ve talked a lot about how potential voters feel sort of disconnected from the whole process and feel like there’s perhaps such an influx of information and of ads and all these things that discouraged even people who are registered Democrats from voting.”

Even though the Georgia runoff was a unique scenario, the students agreed that campaigning is a worthwhile experience for anyone thinking about getting involved.

“I would recommend that anyone who does have the opportunity to get involved in a campaign, take it,” Lepelstat said. “I was skeptical, but then when we actually ran down the numbers, these elections can be decided by very very small margins of votes, especially per county. And you know, it was a really special feeling to have conversations with people and have someone send you a text being like, ‘I voted!’”

Whether interning, campaigning, or creating art, it’s safe to say that students successfully pursued their passions and tried new things while away from the University. As the semester begins, there’s no doubt that students will continue to pursue their passions on campus and apply what they have learned and experienced over the break to their lives at Wesleyan.