In Bring Me the Horizon’s “Post Human: Survival Horror” EP, The Apocalypse is Channeled 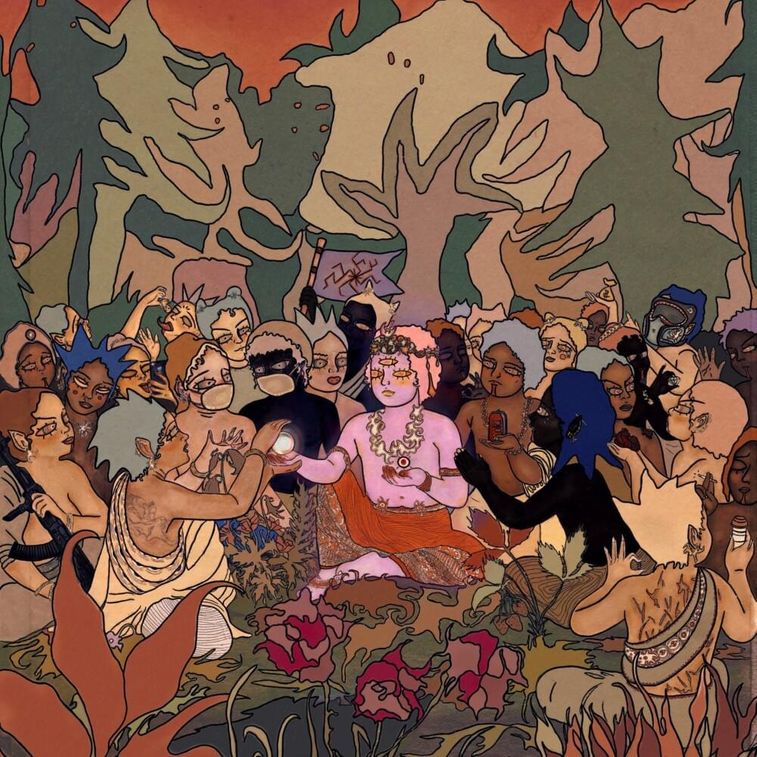 Bring Me The Horizon’s musical journey has taken them to the end of the world. From their roots as a critically derided deathcore act formed in the mid-2000’s, the English rock band has since expanded their musical horizons, taking on post-hardcore, electronic rock and pop-rock, broadening their palette and acclaim with each new release. Their new EP “Post Human: Survival Horror,” the first of a planned four-EP “Post Human” series, is an apocalyptic cyberpunk soundscape that ambitiously draws on the pandemic, climate change, and quarantine gaming.

Listening to the EP from the beginning might come with a shock for newer fans of the band. While Bring Me The Horizon’s most recent album, 2019’s “amo,” was softer and more pop-friendly in its tone, “Dear Diary,” the opening track of “Survival Horror” returns to the band’s roots in metal and hardcore punk. The song opens with rapid-fire drum beats, aggressive guitar work, and underlying screamed vocals from frontman Oli Sykes. Its lyrics contain references to the “Resident Evil” series of video games, with Sykes comparing the horrific setting of the game to the world outside his home.

Following “Dear Diary” is “Parasite Eve,” which lets up on the shredding if not the intensity. The song features more of the electronic production quirks which have come to characterize Bring Me The Horizon’s more recent work. These partially come courtesy of keyboardist Jordan Fish, who joined the band in 2013, as well as producer Mick Gordon, who is largely known for his work on video game soundtracks.

Sykes’s vocals on the song span from a mellow murmur to a wail. He is joined by an eerie sampled Bulgarian choir, alongside a feature from his wife, Alissa Salls, also a singer under the stage name Alissic, who speaks from the perspective of a military leader from a cyberpunk future.

Lyrically, “Parasite Eve,” which takes its title from a 1998 survival horror video game, is the song on the EP most obviously inspired by current events. The song’s second verse references the paranoid mindset behind anti-vaccine conspiracy theories. On the song’s thundering chorus, Sykes asks a question that many listeners will likely have shared as we see how the pandemic has shaped the world:

“When we forget the infection/will we remember the lesson?”

The third track on “Survival Horror,” “Teardrops,” channels aughts-era nu-metal in a song that touches on anxiety, depression and social media addiction. Beyond sadness or anger, “Teardrops” conveys a sense of burnout and emotional exhaustion, Sykes punctuating the chorus with a grim declaration:

“The emptiness is heavier than you think.”

The track, with its cold synth tones and glitchy hip hop beat accompanying guitar chords and screams, is reminiscent of the music of Linkin Park. Sykes has cited that band  as an influence. In 2017, Sykes performed their song “Crawling” alongside Linkin Park at the tribute concert to their frontman, Chester Bennington, who died by suicide earlier that year.

“Obey,” the next song on the EP, features English singer Yungblud. The track opens with an intense melding of rock instrumentals with fuzzy synthesizer tones, sputtering with punky electronic energy. The song’s aggressive verses build towards the payoff of the instantly catchy chorus, which takes on authoritarianism with biting sarcasm:

“Just don’t wake up and smell the corruption.”

The interlude “Itch For The Cure (When Will We Be Free)” (its title another Linkin Park reference) is an electronic pump-up that builds into the towering “Kingslayer.” Featuring Japanese pop-metal duo Babymetal, “Kingslayer” grabs your attention from its opening seconds as its icy synth line descends into a heavy metal breakdown with a breakneck drum and bass style drum beat. As Sykes’s screams grow in intensity, we reach the soaring chorus, carried by the performance of Babymetal lead vocalist Suzuka Nakamoto.

“Kingslayer,” according to Visiting Assistant Professor of Letters in the College of Letters Ryan Fics, also presents a strong example of the posthumanist philosophy referenced in the EP’s title. In an email to The Argus, Professor Fics noted the qualities of this philosophical inquiry.

“Posthumanism thinks of the human as a being in and assembled by the processes of nature or an evolutionary program,” Fics wrote. “This is opposed to a traditional view of viewing humans as being separate from and dominant over nature.”

“Life is encrypted, genome modified/Like a virus in a lullaby/Artificial ’til the day you die, silly program/You’re corrupted.”

“Humans are not separate from nature, but are rather a programmed species, like every other species,” he wrote. “The program that we are programmed by is a corrupt program, always already artificial, imperfect, and without purity. As such, so are humans. But the fact that reality is artificially constructed is something that is hidden from us.”

The song draws near its conclusion with an invitation to escape the false reality:

“This is your wake up call/We’re going down the rabbit hole/Are you ready?”

Fics observed the ideas in “Kingslayer” represent the band’s goals.

“[It is] a never ending journey to wake its audience up to the artifice that…If life is an artificially constructed program, how is it possible to distinguish waking from sleeping?” Fics wrote. “Dreams from reality? How are we to distinguish a truth from a lie?”

These themes, while challenging to a mainstream audience, can be found in works of pop culture such as 1999’s “The Matrix,” a film that Sykes cites as an influence on the EP. After these lyrics about “waking up” from a simulation, Sykes lets out an electronically modified howl, mirroring the scene in “The Matrix” in which the protagonist, Neo, similarly screams as he first escapes his simulated reality.

Sykes isn’t bogged down by the song’s concept, though, slipping in a scream of “is this what you want?” during the raucous outro, a tongue-in-cheek nod to fans who’ve derided Bring Me The Horizon for straying from metal.

Following “Kingslayer” is “1×1” (pronounced one by one), a collaboration with English rock duo Nova Twins. Sonically, as “Teardrops” did, it hews close to Linkin Park’s influence in both style and substance, with cold piano and synths undergirding heavy guitar riffs. Nova Twins vocalist Amy Love’s vocal power elevates the intensity in the second verse as her vocals contrast with Sykes. The lyrics of “1×1” speak to feelings of guilt and shame, which Sykes has said reflect the harm humanity has caused to itself and to the natural world.

The penultimate track of the EP, “Ludens,” was originally released last fall as part of the soundtrack to the video game “Death Stranding.” The song’s title refers to the mascot of Kojima Productions, the company behind the game. With “ludens” meaning both “play” and “practice” in Latin, the idea of “homo ludens” as a further evolution of homo sapiens additionally appears in the Noon Universe series of Soviet science fiction novels.

Lyrically, “Ludens” packs in references to “Death Stranding” and its themes of societal disconnect, dystopia, and isolation. Sonically, the song morphs over its runtime to cover just about every style Bring Me The Horizon have explored. Beginning as mellow electropop, the first chorus escalates to pop rock, before bringing in the entire band on the full-throated second chorus. The bridge falls into a minimalistic glitched-out beat, but springs into a raucous metal breakdown, before concluding with an anthemic electronic rock sound.

“Survival Horror” closes out with the spare, solemn ballad “One Day The Only Butterflies Left Will Be In Your Chest As You March Towards Your Death.” The song is a breakup duet on a planetary scale, as Evanescence frontwoman Amy Lee sings from the perspective of a dying Mother Nature, while Sykes takes on the role of a regretful human race. Free of the rest of the EP’s rock and electronic trappings, the song is driven by piano, strings, and raw, emotive vocal performances. Discordant piano notes and haunting, echoing vocals close out the EP on a disquieting note.

“Post Human: Survival Horror” sees Bring Me The Horizon at the height of their creative powers, innovating and expanding their sound 14 years after their debut. Across the span of the EP, you’ll find music to rage to, to cry to, and to dance to, all imbued with a high-concept verve. While modern alternative and emo-adjacent music is known for lyrical angst, “Survival Horror” elevates the scale of its discontent. It paints pictures not just of personal strife but of global catastrophe, seeking to bring its listeners along on a philosophical journey of awakening that’s also a blast to listen to.

Oscar Kim Bauman can be reached at obauman@wesleyan.edu on Twitter @oscarkimbauman.