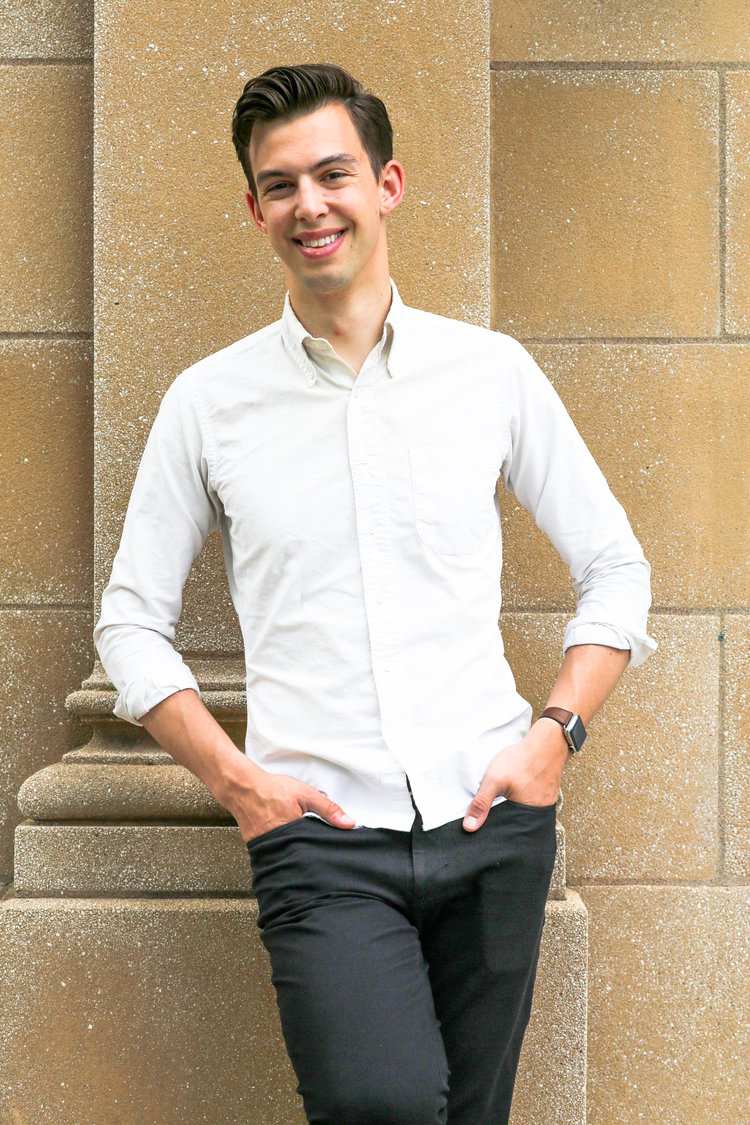 Ben Florsheim ’14 made history when he was elected as Middletown’s youngest mayor on Nov. 5, 2019, after defeating Republican opponent Seb Guiliano. In his first year in office, Florsheim has had to respond to the COVID-19 pandemic and waves of Black Lives Matter protests around the country—including in Middletown—following numerous incidents of police violence over the summer, along with getting engaged to his now-fiancé in September. The Argus caught up with Florsheim as he looks back on his first year in office and the path that led him to run for mayor.

Right from the get-go, Florsheim was involved in government and local politics at the University. He was president of the Wesleyan Democrats and a member of the Middletown Democratic Town Committee. He also majored in the College of Social Studies, whose rigid structure inspired him to be more creative in his now-infamous thesis.

Florsheim’s thesis, a script for the pilot episode of a TV show, was inspired by the disconnect between what he had observed on the campaign trail and the media’s portrayal of politics in shows like “The West Wing” and “Scandal.” While Florsheim pointed out that his thesis wasn’t an attempt to manifest a career in Middletown politics—at least not intentionally—he drew his inspiration from what he had observed throughout his time working in local politics.

After graduating in 2014, Florsheim worked as an outreach assistant for US Senator Chris Murphy (D-CT). While he enjoyed working for Murphy, he was often frustrated with the lack of progress in the Senate, even when Democrats were in the majority.

“There were a couple of short years that I was there where we were the majority and not that much would happen even then,” Florsheim said. “It’s been not a very productive decade for the Congress with Trump in the White House and a Republican majority in the Senate. I really liked working for Chris, I really liked my coworkers, but it was hard to get anything done.”

Despite his frustration with the job, Florsheim enjoyed meeting and working with local leaders throughout the state to ensure their voices were heard in Congress.

“I loved that part of the job because you got to see what progress really looked like at the local level,” he said. “I felt like that’s where the action was and that’s where you can make a difference on the issues that are important to you.”

Fortunately, in his first year, the job has lived up to Florsheim’s expectations.

“It is just really the job that I wanted because I thought that it’s where you get to do a little bit of everything and you got to sort of make a difference locally,” he explained. “You don’t get that when you’re serving in a legislative body or serving in a statewide office or anything like that.”

When asked about the biggest accomplishments of his term, Florsheim recalled Thursday, June 11, 2020, when the Middletown Common Council approved a $210.8 million budget for 2020-2021. Notably, the budget increased funding for Middletown Public Schools without raising property taxes in the city.

“We need to make those investments if people are going to want to continue to live here and send their kids to school here,” Florsheim said.

Florsheim also recalled a more recent accomplishment, when the Middletown Common Council approved the creation of an anti-racism task force on Monday, Oct. 5. The task force now serves as an advisory committee to Florsheim and was funded using $200,000 reallocated from the Middletown Police Department’s private-duty overtime funds in the 2020-2021 budget.

“I’m so thrilled with the membership of it,” Florsheim said. “We had a ton of interest in it.”

The new task force is made up of 17 members, including the Middletown Common Council’s three Black Councilmembers: Councilwoman Jeanette Blackwell, Councilman Darnell Ford, Councilman Edward Ford Jr., all of whom will serve three-year terms on the task force.

For Florsheim, the creation of an anti-racism task force along with increased funding for Middletown Public Schools is part of his larger goal of making the City of Middletown a welcoming and inclusive community.

“Whether it’s symbolic things like painting the crosswalk downtown with the pride flag or more substantive things like investing in early childhood education, I want to make sure that we are doing as much as we can on both of those fronts to try and just make this a place where people are excited about living and they feel welcomed,” Florsheim said.

Another achievement for Florsheim is the 21st Century Infrastructure Development Bond that Middletown voters overwhelmingly approved on Tuesday, Nov. 3. This bond authorizes the city government to borrow $55 million to fund downtown and riverfront redevelopment efforts.

Florsheim also cited the launch of the SeeClickFix app as one of his proudest accomplishments. The app, which was launched on Wednesday, Nov. 11, allows residents to report issues—such as potholes, recycling violations, and graffiti—directly to the city.

“I spent a lot of time during my campaign knocking on doors and heard very regularly that people sometimes struggled to get timely responses from City Hall on concerns in their neighborhood,” Florsheim said.

“I think that…the progressive way to fill a pothole is making it possible for everybody, regardless of what part of town they live in or what language they speak, to be able to equally access city government services from their device, from their home, and [to] be able to expect a response and make sure that we are tracking where we are responding things, to make sure that we’re doing so in an equitable way,” he added.

Despite these accomplishments, Florsheim observed that the past year has also come with many challenges.

“I do think we’ve accomplished a lot in this first year, and I’m proud of that, but you also see up close the constraints that are going to govern how much you are going to accomplish,” he said. “And those are constraints within city government in terms of what you’ve inherited from your predecessors and sort of established practices of doing things. There’s some departments and people who are doing a great job as it is, there are some departments of people who are eager to incorporate positive changes, and there are some that aren’t and are very reluctant to minor changes that we think would be positive.”

There are also many constraints entirely outside of the control of city government.

“There’s COVID-19, there’s the economy, there’s things that are outside of your control that you at the same time have the responsibility for,” Florsheim said. “Navigating that has been the story of my first year. One of my predecessors said ‘the first year is learning,’ and I feel like I’ve learned a lot, and I feel like we’ve also been able to—in many ways—do what we said we would do.”

While coordinating Middletown’s pandemic response has been both incredibly time consuming and challenging, by shifting to a completely virtual format for city government events, the pandemic has also changed the way the City of Middletown interacts with residents for the better.

“We’ve seen more participation in things like council meetings since they’ve been remote,” Florsheim said. “I think there’s a lot of things that we’re doing because of COVID right now that we’ll want to continue in the future because they’ve sort of lowered the barriers of access to city government.”

Although the pandemic has disrupted some of his goals for Middletown, Florsheim is still looking forward to making positive changes in the city in many different realms.

“I would like to reduce cost of living, and I think that again, this infrastructure package bringing in housing and economic development is going to be key to that,” Florsheim said. “As pessimistic as I am about the shorter term budget picture because of COVID, I am optimistic about the medium to longer term budget picture for that reason.”

Florsheim hopes to continue to invest in public education, noting that while the city has made significant progress in improving Middletown Public Schools, there is more to be done.

One of Florsheim and Superintendent of Middletown Public Schools Dr. Michael T. Conner’s long-term goals is to introduce universal pre-kindergarten in Middletown.

He also spoke to the importance of a shift in consciousness surrounding sustainability practices, following the city’s climate emergency resolution.

“We’re trying to engender a shift in how city departments think about sustainability and try to make it as much of a consideration as cost or timeframe or anything else when it comes to making day to day decisions,” Florsheim said. “We’re asking these departments to look at its own internal practices, think about where they can be more energy efficient, where they can be more sustainable, in their day to day practices.”

“I don’t have rose-colored glasses about the incoming administration and them being able to magically solve this overnight without some serious and painful decisions, but it is really nice to think about the prospect of a federal government that is not actively working against what we’re trying to do here in the state,” Florsheim said. “That’s something in year two that I can sort of look forward to.”

Specifically, a Biden-Harris administration could possibly be a positive sign for a relief package for cities and states, though, as Florsheim explained, what that looks like and how robust it will be remains to be seen.

Florsheim also hopes that the City of Middletown and the University can continue to collaborate with one another.

As for personal goals for the future, Florsheim is hoping to run for a second term. However, while he is unsure what would come next in his career, at the moment he doesn’t have higher political ambitions.

“I think a lot of people think otherwise because they see a young man running for mayor and they think what’s he gonna do next?” Florsheim said. “But you know, it’s not my goal right now.”

More than anything, he’s hoping for a less stressful but just as exciting second year.

“I’ll just say that it has been a chaotic year, but it’s a chaotic world and we all have parts to play,” Florsheim said. “I’m fortunate enough to find myself playing this role, and I’m hoping that year two is just as much of an exciting year and hopefully maybe a little bit of an easier year.”