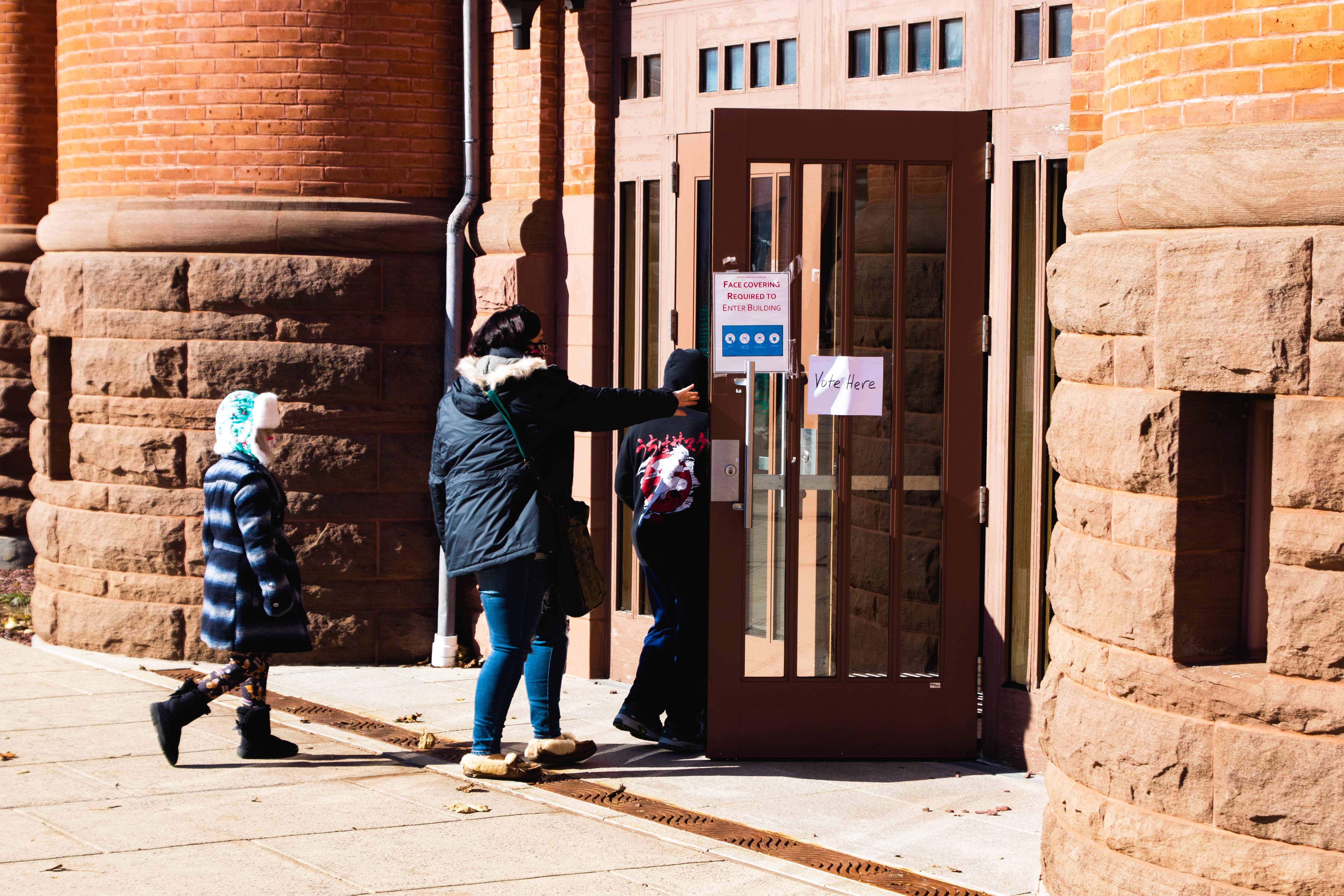 Around 600 people voted in the general election on the University’s campus on Tuesday, Nov. 3. Voting was conducted in Beckham Hall in Fayerweather and at a same-day registration tent located near the Freeman Athletic Center.

On election day, the University Voter Engagement Assistants helped direct Middletown residents to the correct voting locations and assisted University students with same-day voter registration. In addition to the 600 people who voted in-person at Fayerweather throughout the day, Assistant Director of the Jewett Center for Community Partnerships Diana Martinez reported that by 5 p.m. on Election Day, the registration tent near the Freeman Athletic Center had already registered around 200 people.

“I think a lot of students voted absentee, thinking about their own communities back home and the impact that their votes would have at the local level there,” Martinez said. “So I’m really interested to see those numbers once we’ve got them.”

The City of Middletown is still counting absentee ballots, and full statistics on voter engagement for Wesleyan students specifically will not be available until 2021.

For many people, registering in Connecticut on election day was the last resort.

“I think a lot of people wanted to get their absentee ballots for states that matter more, and then it never came,” Voter Engagement Assistant Lia Franklin ’24 said.“And then their last resort was registering same-day [in Connecticut].”

Many students reported having difficulty getting their absentee ballots due to delays at WesStation, or having their ballots sent to their home addresses.

“I got my ballot from Colorado…My parents sent my mail-in ballot to me, and it got stuck at WesStation for, like, a week,” Ethan Geiger ’24 said. “It didn’t get confirmed that it was received until this morning. So it’s been a journey.”

Austin had a similar experience with her Massachusetts ballot.

“I tried to get my ballot sent here at Wesleyan, but it got sent to my dad’s house in Massachusetts. So I had to have him resend it to me,” Austin said.

Due to issues concerning mail-in ballots and a lack of early-voting in Connecticut, many students registered to vote in-person on Election Day.

“We are one of the only states that has no early voting, and we also have a voter registration deadline of October 27, which means that there was a large gap of people who, if [they] just did not have the time or the resources to register before October 27—or [they] didn’t even know that [they] had to register in CT because [they] thought [they] were able to vote in [their] home state—then [they’re] put in a bind and forced to do same-day registration,” Campaigns Director for Wesleyan Democrats Emma Bella Bass-Lawrence ’24 said.

In addition to the stress concerning mail-in ballots and voter registration, many students experienced anxiety and uncertainty on campus during Election Day.

“I feel like the world is falling apart,” Eliza Austin ’24 said. “I’m just trying to distract myself with work, honestly.”

Other students, such as Brinton Thomas ’23, expressed frustration with the two candidates on the ballot.

“I don’t like either of the candidates,” Thomas said. “Watching the debates was just frightening to me.”

Other students reported feeling similar heightened stress during the 2016 election. Mary Johnson ’21, one of the few students on campus for both the 2016 and 2020 general elections, noted some differences in student attitudes.

“I think this time around, the University definitely tried more to replicate some of the spaces to process which I think would have emerged more organically in the past, like, you know, people gathering in the common room to have a watch party,” Johnson said. “And now that couldn’t happen, obviously, in the same way.”

During Election Day, numerous University organizations and student groups organized virtual and in-person gatherings to reduce stress and anxiety among the student body. Anna Tjeltveit ’23 hosted a “Great British Bake-Off” stream to ease anxiety among students when results began to come in. Similarly, on Monday, Nov. 2, the Office of Religious and Spiritual Life (ORSL) facilitated pre-election fireside chats with s’mores on campus and over Zoom. The Wesleyan Democrats led election watch party which finished later than 2 a.m.

In preparation for the election, the Wesleyan Student Assembly (WSA) reestablished the Civic Engagement task force, which coordinated the efforts of several student-run organizations across campus.

The task force converted positions that had previously been filled on a volunteer basis into paid employment opportunities for students to work as Voter Engagement Assistants. Paying workers for their time helped the task force recruit more students who would be more committed and engaged in the work, according to Martinez.

Head of Wesleyan’s branch of Every Vote Counts, a national, student-run, nonpartisan organization aimed at increasing voter turnout, Nima Ghasoor ’21 remarked on the increased collaboration across the University this year as a result of the task force’s creation.

“We had a lot more support from the administration, specifically the Jewett Center and establishing a task force really empowered us to do more,” Ghasoor said.

According to Martinez, the task force’s primary goal was to ensure students were able to cast their ballots during this, particularly complicated and contentious election season.

The task force also provided materials for voting by mail that might not be readily available to students, such as stamps and envelopes to students looking to vote by mail who might not have those readily available. Ghasoor also used social media accounts for these organizations to open the floor for voters to ask questions, which he says was helpful for a lot of students.

In addition to University efforts, student activism further encouraged voting, and took a variety of forms. During Election Day, poll standers held signs outside Fayerweather to support local candidates. Some of the poll standers included Vickie Szynkowicz and WesDems Co-Chair Bryan Chong ’21, both of whom were campaigning for District 33 representative candidates Linda Szynkowicz and Brandon Chaffee respectively.

“I was at Fayerweather for around 5 hours and the overall atmosphere was great,” Chong wrote in a message to The Argus. “The lady pollstanding for Linda Syznkowicz was really nice and we chatted the entire time. I brought a speaker and Anna Tjeltveit ’22 (on shift with me) blasted some tunes from both the Bernie and Biden campaign playlists, which definitely livened up the slower moments.

“In the last 30 minutes I sent out two email blasts to our volunteer list with last-minute emergency actions from the [Pennsylvania] Dems,” Olson said. “So one of them was to get people towards a phone bank for the last 30 minutes in Allentown, and then one was a ballot cure in the last five minutes of polling, and we got some people out and we got a fair bit of action, even in those I sent out at 7:55 and closed at 8:00.”

Although the COVID-19 pandemic posed challenges during this election cycle, many students were able to organize alongside the University. While campaigning looked different this election year, students used many traditional tactics to get out the vote.

“[Student activism is] different because of COVID-19…but overall, most of the stuff that students are doing on-campus is the same: texting their friends, texting their families, doing phone banking, and standing at the polls,” Wesleyan Democrats Public Relations Director Maya Gomberg ’22 said.

Note: Lia Franklin ’24 is a contributing writer at the Argus

Elias Mansell can be reached at Emansell@wesleyan.edu.

Kay Perkins can be reached at Kperkins@wesleyan.edu.