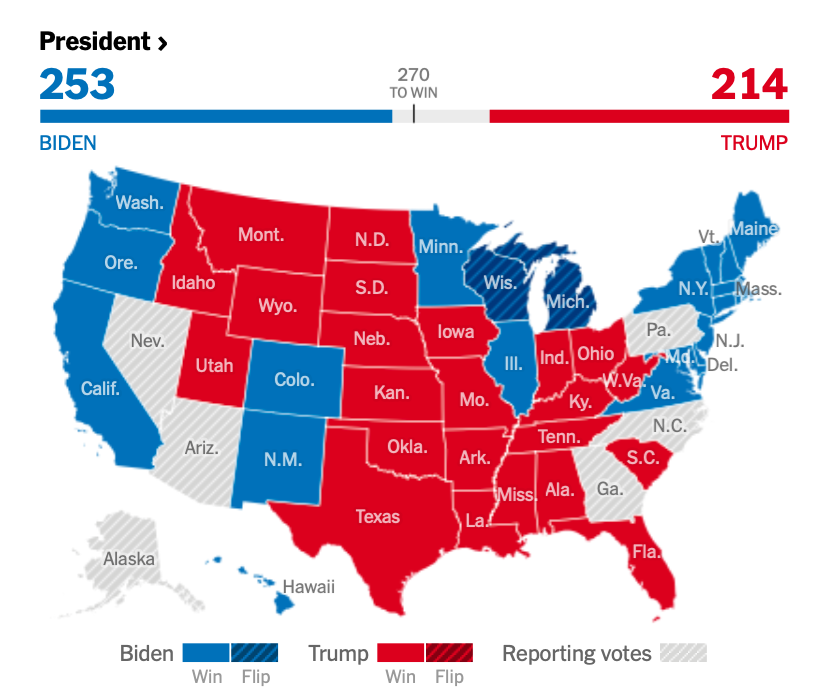 On Tuesday Nov. 3, students in various stages of inebriation all across campus anxiously watched the election results begin to trickle in. At the time of publication, current results showed Joe Biden at 253 and Donald Trump at 214 Electoral College votes, but many crucial states, including Arizona, Pennsylvania, Georgia, Nevada, and North Carolina have yet to be called. In order to alleviate some of the student stress and unpredictability surrounding the election, we talked to some American government professors to get their thoughts and predictions about the election.

In the era of fake news and with the President prematurely declaring his own victory, sources are important. Most professors recommended following 538 and the New York Times’ coverage in addition to watching PBS News or listening to NPR. While professors were unwilling to predict the final result of the election, they offered insight into which states could be crucial to watch in the next few days.

“I’m going to not make any predictions,” Associate Professor of Government Justin Peck said. “It does seem that now, at least what’s outstanding, seems to be Pennsylvania, Michigan, Wisconsin, and then there does seem to be a little bit of controversy I’ve been following on Twitter. People who are Trump allied, in particular ex-Governor Scott Walker, have been suggesting that perhaps, Biden’s lead in Arizona is in some doubt. It could just be a kind of media strategy to keep uncertainty around this out there because Biden needs Arizona. I’m a little bit skeptical of the people who are suggesting that Trump can end up winning Arizona.”

This skepticism is because mail-in ballots, which are currently being counted across the country, are typically majority Democrat, making it likely that Biden will keep, or increase, his lead in Arizona. These final swing states will also determine when we have conclusive election results.

“I wouldn’t predict a Biden win in Georgia, but if some freak occurrence happens and Biden wins Georgia, then it’s over,” Peck said. “There’s also a chance that this will come down to Pennsylvania…and we won’t know for at least a couple days.”

Professor of Government Erika Franklin Fowler reiterated the need for patience, even though tensions will undoubtedly be high until a clear winner is announced.

Assistant Professor of Government Steven Moore also added that the majority of ballots remaining are absentee ballots, which have generally gone to Biden, and this may impact the results of the remaining states, particularly Georgia.

“Last I checked, there were about 50,000 votes left [to count in Georgia] and Biden was down about 13 or 14 thousand,” Moore said. “They’re almost all absentee votes, which even in Trump counties, he’s winning by a comfortable margin. I think if he just wins like 70 percent of those, which he has been doing to this point, I think that would give him an extremely, extremely narrow edge.”

While an election during the COVID-19 pandemic certainly looks different, there are some similarities to the 2016 election.

“I think certainly a common element of both of these is the way in which Donald Trump over-performed relative to what polls were saying, going into the election night,  and I think that there is, from my perspective, some reckoning that will have to occur,” Peck said.

Several professors noted that polls leading up to both the 2016 and 2020 elections may have given Democrats a false sense of confidence.

“What is going on on, in these last two elections that has led to the polling narrative going into the election night to be that: this is basically in the bag for the Democrat and then have that not be the outcome,” Peck said.

Associate Professor of Government Logan Dancey agreed with this analysis.

“It does seem like the polls in 2020 overestimated support for Democrats, just as they did in 2016…possibly for different reasons, but that there are similarities between 2016 and 2020 when polls were overestimating Democrats’ vote share,” Dancey said.

Moore explained that this election is different from the one in 2016, citing increased voter turnout.

“I think notably turnout in some key states or specifically cities that did not see a huge turnout in 2016 are likely to be the ones to kind of flip this for Biden,” Moore said. “A big part of the reason that [he] became the Democratic nominee is because of his strength with certain Black voters and there was a hope that that would lead to higher turnout in these largely Black areas in the Rust Belt that were to some degree difference makers in 2016. And it appears that that turnout has materialized and that those votes are, at least part of what’s giving Biden the edge in those states.”

Peck suggested that the Senate and House elections fit with the portrayal of the Democratic Party underperforming.

“It looks increasingly unlikely that the Democrats will take control of the Senate, going into election night, I think that the odds were that they would,” Peck said.

Dancey also noted that Democrats performed worse than they may have expected in state legislative races across the country.

“I think Democrats nationally are probably disappointed with how they did in state legislative races just as they are disappointed in how they did in federal races,” Dancey said. “But in Connecticut at least, it seems like they might have picked up some seats here and just add to their majority in both chambers.”

Professors also emphasized that even in the case of a Biden victory, congressional control is a crucial factor in reversing policies implemented by the Trump Administration, in addition to the impacts of a conservative Supreme Court. Biden would likely begin his administration with a series of executive orders reversing a number of executive orders made by the Trump Administration, which can be done without the support of Congress, in addition to generating momentum and press for the nascent administration. Moore explained that a Republican-controlled senate could make it difficult for Biden to achieve many of the Democratic Party’s goals and have his nominations for cabinet officials approved.

“There’s already some discussion of if the Democrats don’t win the senate, Republicans will likely try and temper the ideology of the nominees that Biden will be putting forth for big cabinet positions,” Moore said. “In general, Democrats have a very ambitious agenda and Mitch McConnell, I think, is basically salivating at the opportunity to go back to the kind of obstructionism that he really perfected in the Obama years.”

While Trump’s various lawsuits against states, specifically Nevada, could be seen as worrisome, Moore emphasized the futility of his actions.

“[Trump] has already filed a number of lawsuits and they are mostly  just extremely frivolous and meaningless,” Moore said. “In terms of actually being able to stop the vote count, it’s extremely unlikely that he will be successful… even Trump-appointed judges have just not really taken the bait on these”

We may not get results today or even this week, making this an emotionally and mentally draining time. However, as of the evening of Nov. 5, current trends suggest a narrow, but possible, Biden victory.