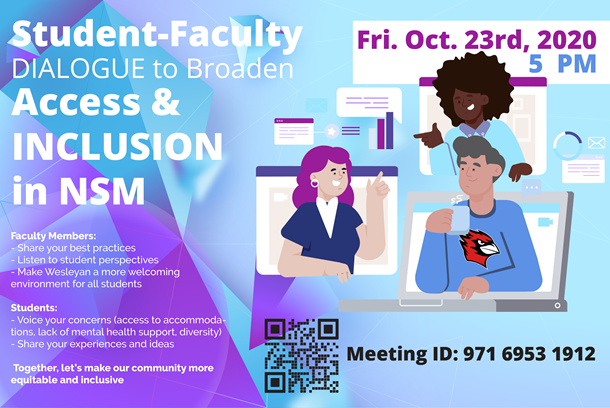 The Natural Sciences and Mathematics (NSM) division held its first student-faculty dialogue session this year discussing diversity and inclusion in STEM over Zoom on Friday, Oct. 23. The dialogue took place over a month after the division released an inclusion statement pledging its dedication to promoting and supporting anti-racist practices.

The session began with general statistics and information about implicit bias in society and its impact on individuals within the STEM field, then shifted to focus solely on data pertaining to the makeup of NSM faculty and students majors. The dialogue concluded with smaller discussions facilitated between students and professors in breakout rooms.

Fisk Professor of Natural Science Ishita Mukerji shared unofficial statistics obtained from the University’s Office of Institutional Research in the session, revealing that 80% of all STEM faculty at the University (excluding the Psychology department) are white, and that 68% are male-identifying. Data collected from the first-year cohorts corresponding to the classes of 2012 through 2016 showed that over 1,200 students indicated a natural science as their first choice of major prior to coming to the University. About 38% of white students from those classes eventually graduated with a natural science major, compared to only 29% of students considered to be underrepresented minorities (URM), a person whose racial or ethnic makeup is African American or Black, Hispanic or Latinx, Filipino, Hmong, Vietnamese, Native American or Alaskan Native, or Native Hawaiian/Pacific Islander. Around 96% of white students who graduated with a natural science major had a GPA above 3.0, compared to 65% of students within the URM demographic.

“You can see that we have an issue where many of our underrepresented and minoritized students are not doing as well as our majority students,” Mukerji said. “I think this is the crux of the problem for us here at Wesleyan, and that’s part of the point of having this conversation.”

The student College of Integrated Science (CIS) majors involved in organizing the event presented student testimonies from the @fgli_at_wes and @blackatwesleyan_u Instagram accounts. They compiled student quotes into a slide show, allowing the audience to silently process and reflect on student experiences individually.

“My freshman year my Vectors and Matrices professor told me I should consider pursuing another major when I told him I wanted to major in computer science, before the class actually even started; I was the only kid he said that to and the only Black kid in the class,” one student quote read.

Other quotes touched on the experience of struggling to be heard in the classroom.

“Every time I’ve been put into small groups with white students so far this year they completely ignore my input, speak over me, and move on to another section without even trying to find out if I am going at the same pace they are,” a student stated. “They don’t do this for their white counterparts though—I see nothing has changed at Wesleyan.”

One student emphasized their desire to see conversations focused on diversity and inclusion continue throughout the academic year, not confined to the events of the summer.

“I really wonder what conversations about race are gonna look like this school year. I wonder if people will push to have those conversations at all, as if once 2020 is over or once BLM ‘dies down,’ it will suddenly no longer be an issue worth discussing,” another student wrote.

After the slide show presentation, Director of the Resource Center Demetrius Colvin prepared attendees for breakout room sessions, where students and professors discussed three questions from the event’s student organizers: (1) how to make the NSM community more welcoming to all students, (2) how to make classes more accessible to students, and (3) how to better support students at the University and beyond. After the groups discussed, an elected spokesperson from each breakout room shared what had been discussed with the larger group. While the dialogue was originally scheduled to last only an hour, the conversations ran over time by more than 30 minutes.

“It’s clear to me that we did not have enough time to discuss everything that we needed to,” Mukerji said. “You can expect that we will continue this conversation, and the CIS, along with these student groups, will arrange another event.”

Correction Note 10/30: Student-faculty dialogue on Oct. 23 was the first session of the year.