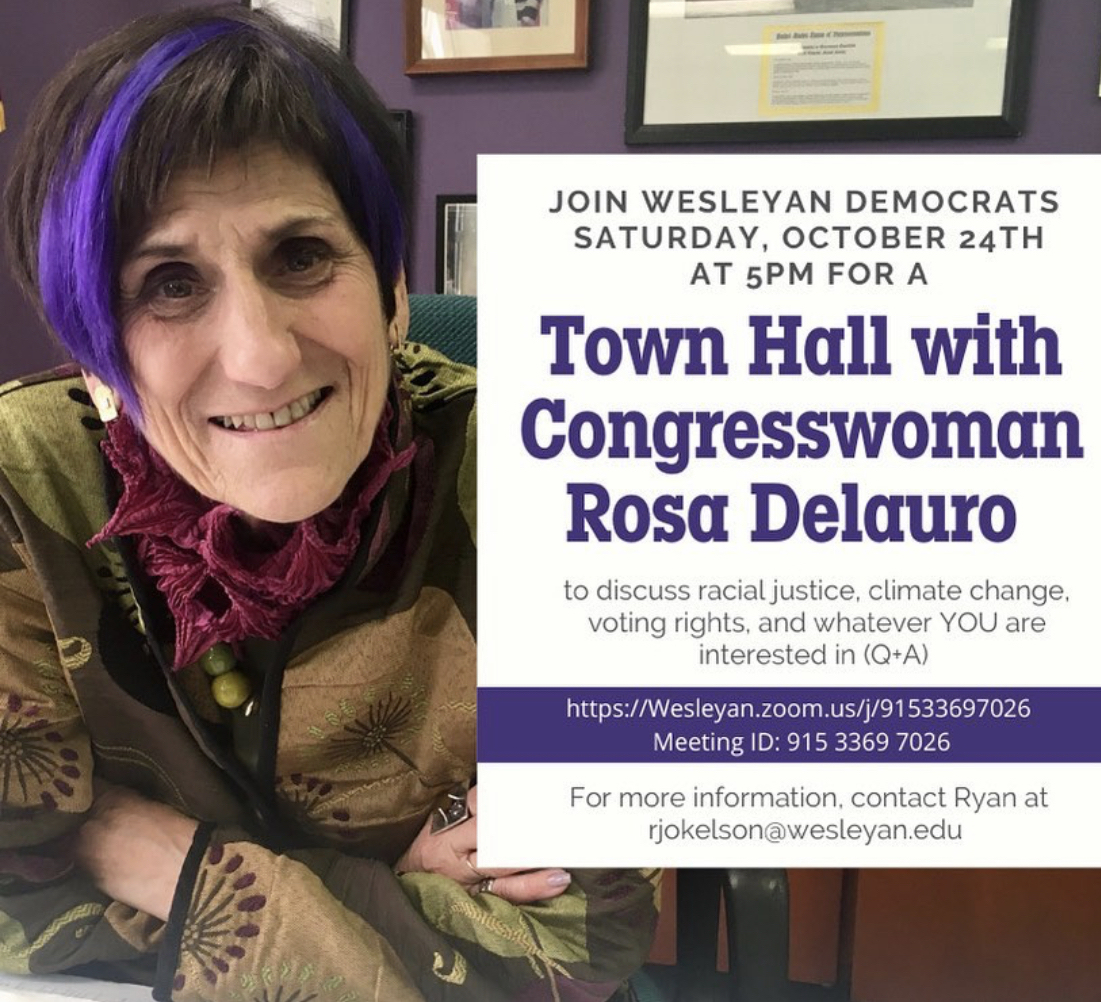 The Wesleyan Democrats hosted a virtual town hall with Congresswoman Rosa DeLauro (D-CT 03), who is up for reelection this year, on Saturday Oct. 24. During the town hall, DeLauro discussed a wide range of issues from the current presidential administration’s COVID-19 response, climate change, voter suppression, to criminal justice reform.

DeLauro began the event by emphasizing the importance of this election and of defeating incumbent President Donald Trump. DeLauro believes this will ensure a sufficient federal government response to the COVID-19 pandemic.

“We are in the battle for everything that we care deeply about,” DeLauro said. “Joe Biden calls it the soul of our nation. It’s about people’s lives. This is the worst economic and healthcare crisis that we have seen in a generation. Everything that we know of is really at risk. Millions of people [have been] affected [by COVID-19 and] over 220,000 people are dead and [the current] administration takes the responsibility for nothing…which is really staggering.”

Additionally, DeLauro stressed that climate change is an urgent issue that the Trump administration has failed to address.

DeLauro also recently co-sponsored the Justice in Policing Act of 2020, which aims to combat racial biases in policing. DeLauro argued against defunding the police and instead advocated for increased police training programs, education, housing, and other community programs.

“I don’t find that it is one or the other…. I think that’s a false choice, and think about where we spend our money,” DeLauro said. “We do not have to pit people one against another. That doesn’t get us anywhere [and] that doesn’t further the opportunity for trust. You go to some of my communities in New Haven, [and] they want a strong police presence because they’re scared of the violence. Let’s look at what’s missing, let’s look at what we can do, and that’s where we ought to be spending our money.”

When asked about community organizing, DeLauro stressed that the University has done great community engagement work and can have a major impact on local issues.

“I think that Wesleyan has been very much involved in community with the arts, with youth services, with these areas, which I think are critical,” DeLauro said. “Creativity and looking at how one engages with the community that you live in is critical…and maybe you can foster conversations that allow for the mayor, the chief of police, ask them to come and talk to you or go there and talk to them about what way in which you can participate in helping them do their job better, not as an adversary, but as a partner.”

DeLauro also spoke about some of the community programs she has been involved with, including Kick Butts Connecticut, which teaches middle school kids of the dangers of smoking, the Anti-Crime Youth Council, which allows high school students to mentor their peers and advocate for crime-related issues, and Rosa’s Readers, which encourages elementary school children to read more books.

DeLauro concluded the town hall by stressing the importance of the election and that Democrats have a strong chance of regaining control of Congress.

“We have such an opportunity this election…. It’s about your lives, it’s the lives of your families,” DeLauro said. “That’s the way I view it, and the thing is we are going into this election strong. I believe we are going to increase our numbers in the House and…I think there will be many more women in the House [too], which is great, and I think we’ll get the Senate.”