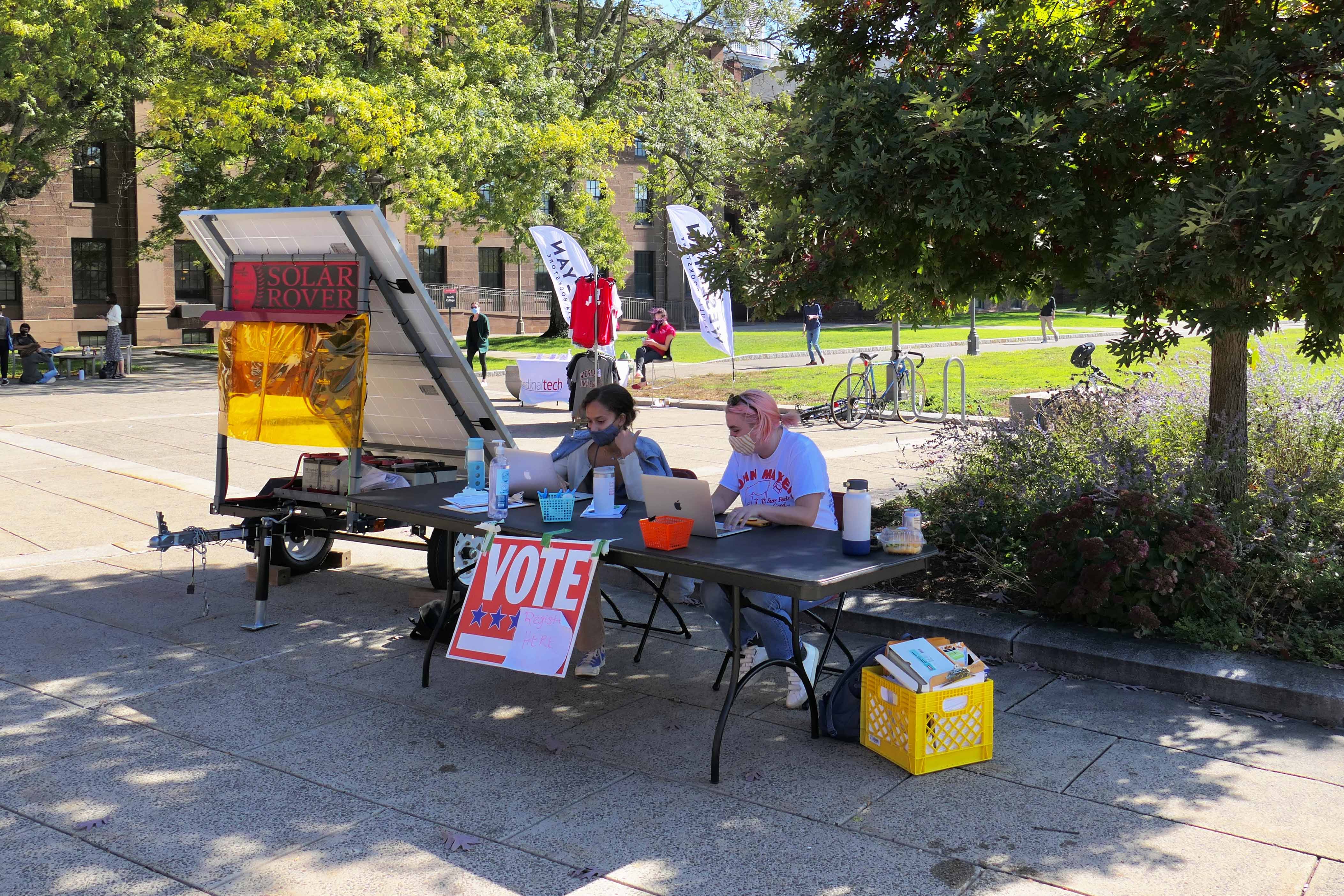 On sunny days, a table sits outside of Usdan University Center (Usdan) with a colorful sign that reads “VOTE.” Student volunteers at the table are there to register students, answer questions, and provide resources about requesting absentee ballots and voting on Nov. 3. While this familiar voter registration table has made appearances outside of Usdan in past semesters, it is now part of a larger collective effort to dramatically increase voter registration and turnout on campus.

According to recent data, 84.2% of University students were registered to vote for the 2018 Midterm elections and 55.6% of those students voted in that election cycle. This was a 30.6% increase in turnout from the 2014 Midterm elections, as a result of increased registration and turnout efforts on campus.

On Sunday, Oct. 11, the Wesleyan Student Assembly (WSA) voted to reestablish a Civic Engagement task force as part of the Community Committee (CoCo), which is an expansion of these past efforts by last year’s Student Life Committee (SLC) Chair Huzaifa Khan ’22 and senator Katelin Penner ’22.

Penner explained that the 2019-2020 task force was unable to fulfill all of its goals due to the disruption caused by COVID-19 in the spring semester.

“[The resolution to establish the original task force] ended up getting passed fairly late into the…semester, so we weren’t actually on campus for a very long time when it was active…. We did some [things] like tabling [and] storm the dorms [similar to what’s] happening right now,” Penner said.

This summer—in preparation for students’ return to campus—WSA senators started planning how they could reestablish and expand the task force.

“As the chairs of committees, we had summer projects [of] things we were working on,” George Fuss ’21, the current Chair of CoCo said. “Getting this civic engagement task force restarted was one of mine because last year it had a sunset clause on it where it was supposed to be renewed at the end of the year to decide how we wanted to implement it into the WSA and we never got to that, so one of my projects was figuring out how to do that.”

The resolution aims to revive the past task force, which will facilitate and expand on existing voter registration efforts led by the Jewett Center for Community Partnerships (JCCP) and various student groups such as Every Vote Counts, Wesleyan Democrats, New Voters at Wesleyan, and Sunrise Movement.

“The aspect of centralizing all this work that different student groups do separately, I think, is a pretty good function [of] the WSA,” Bryan Chong ’21, CoCo Vice Chair and Chair of the Community Engagement Task Force, said. “A traditional role of the Community Committee specifically has been to help different student groups on campus achieve their mission and also foster relationships between groups and to build coalitions that do good work on campus.”

Leading up to the 2020 election, the task force is working on tabling outside of Usdan as well as “dorm-storming,” which the WSA had done in past years, in a COVID-safe way by having students canvass their own dorm buildings.

“We have a table outside Usdan that also does voter registration and that is actually a paid position that the JCCP is offering to federal work study students exclusively,” Chong said. “They get trained and they can sit there and help people out. What happens is that when [students register] to vote they can pass all of these completed forms to the table which processes them and we have people that bring all these forms down to city hall so its a whole streamlined system.”

Offering these paid positions is part of a recent JCCP effort to give all students the opportunity to engage in civic engagement and voter registration, regardless of their financial situation. Up until recently, not all JCCP volunteers were paid.

“Historically, we’ve only really had students do tutoring work through the seed grant since we get that covered half by the federal work study grant and half by a federal literacy grant so it doesn’t cost our department anything to hire tutors but…it didn’t really seem fair if you were a student who was on work study and maybe wasn’t interested in tutoring,”Assistant Director of the JCCP Diana Martinez said. “So, we made the call last year to expand all of our programs to any student who has federal work study.”

Through tabling, student volunteers have had the opportunity to encourage their peers to vote by helping them navigate the voting process.

“It’s really exciting to see all these people who want to vote but don’t necessarily have the knowledge,” Ruby Clarke ’24, a WSA senator on the Student Life Committee, said. “I think one thing it’s also important to recognize is that on a college campus [there] are a lot of young voters who historically haven’t necessarily turned out and so it’s really important to try and get the youth votes out.”

From guiding students who are confused about where to mail in their ballots to giving out stamps, registration table volunteers have played an important role in ensuring that the voting process goes as smoothly as possible for students.

“Most of what we [do is] helping people get stamps…they might have had some of the paperwork but didn’t know where to put it in the mailbox or they weren’t quite sure when deadlines were,” Clarke said. “I was also a witness for someone who was actually voting which was really cool…. I think without us being there it would have been way more difficult for other people to, you know, take the next step in terms of getting closer to actually voting.”

The task force is also reimagining the WSA’s annual Storm the Dorms, holding it several times throughout the month of October, rather than just on one night. Student dorm stormers can only canvass their own dorms in order to follow campus COVID-19 regulations.

“What I’ve been doing specifically is organizing a team of canvasses [for students] inside their own dorms to canvass their neighbors to get people to register and to remind people of deadlines and to get people out to vote when we are getting closer to election day,” Chong said. “I think we have more than twenty canvasses right now [with] things spread between six dorms.”

Through the dorm storming process, canvassers have noticed that a large number of students have already registered to vote and are eager to participate in the upcoming election.

“It was really interesting to see how many people were registered [and] how many people had already asked for an absentee ballot and were really excited to be involved in the political process,” Clarke said. “I feel like that’s really speaking to how engaged people are right now and seeing how important politics is.”

Chong hopes that in the coming weeks, they will be able to recruit more volunteers.

“We’re still trying to recruit more people,” Chong said.“We don’t have canvassers in WestCo, in the Nics, in Hewitt, or in Low Rise. We are also hoping to eventually recruit more people to see if we could also knock on wood frames [and] program houses.”

Although there is still a lot more work for the task force to do, students involved in these efforts expressed excitement at the political power young people have.

“It’s really important and necessary that we have avenues for youth to have their issues heard and also their ideas and opinions heard…because we aren’t just people who have problems but we’re also people who have ideas and solutions,” Clarke said. “It’s super exciting to see the ways in which Wesleyan is…incorporating similar ideas into everything on campus.”