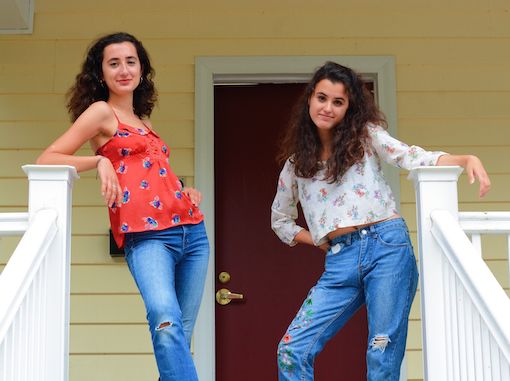 Katie and Olivia Lopez ’21 (also known as Lopii) are a dynamic duo widely known across campus. Whether the twins are composing music and lyrics, running test shoots, or just hanging out with friends, their drive and personality bring passion and energy to their work. Though Katie said she doesn’t believe in twin telepathy, it’s clear the two share a special bond that allows them to successfully collaborate on many creative projects, including original musicals, films, and albums, the latest of which—Year iii—is being released on Saturday.

The Argus: What led to you deciding to go to the same school?

Katie Lopez: We both toured Wesleyan together and just both fell in love with it—

Olivia Lopez: —At the same time.

KL: It wasn’t because we wanted to go to school together, it was just because we both liked the same school.

OL: We were on the tour and we both looked at each other in the same moment and we just knew, we knew what the other one was thinking, we just have to go here. We have a lot of the same interests and Wes really appealed to us. And also we have a band together, we were like “This could be really fun, to be in the same space.”

A: Can you tell us a little bit about “Bloom”?

KL: Oh my god, I’d love to! So “Bloom” is a musical I wrote, Olivia wrote the music and lyrics and I wrote the play, or the book, and it was produced by Second Stage my sophomore fall. I wrote it in Eddie Sanchez’s Intro to Playwriting my spring of freshman year. It was quite magical, just the people who worked on it and the collaboration was amazing and the, y’know the actors and the… Do you want like a log line? [both laugh]

KL: Well, it follows a street performer who dresses up as a bride. So she has white makeup on—you know, you’ve seen—she’s a statue. Anyway, so one day a photographer comes and takes photos of her, and—oh, she’s also a songwriter, but she’s like a hidden songwriter—so he comes and he takes photos of her and they form a friendship. They fall in “like”, as my professor says.

KL: And she shows him her songs, blah blah blah, that’s the synopsis. And there’s like a whole chorus of busker musicians as well. I originally had three written, and then seven people came back for callbacks and we were like, “You’re all cast, because you’re all amazing.”

OL: It was one big family, and I always look back on that musical, it was like, more than a musical. We met so many people doing it and it was just this magical moment in time where we just all really connected.

A: Olivia, had you ever written music for a play before?

OL: No. I think when Katie approached me about it, we were both on the same page, we wanted it to be sort of singer-songwritery, folk, sort of vein, and I knew then that I could definitely do that. And we lived in Brooklyn the summer before it went up and spent, oh my gosh, weeks, there was a piano in the apartment that we were living in and we would just sit there and we would talk through the emotion in scenes and I’d just sit at the piano and play and think of how the character was feeling and we’d both be singing and we’d come up with a song, or I’d come up with a song, and I’d sing it to Katie, and she’d be like “Oh my god this is perfect for this part!” and we’d play it. It was wonderful, it was very collaborative.

A: So you guys have a band.

A: First of all, where did the name come from, and how did the band start?

OL: The name is really fun. So in high school, Katie and I senior year—not by choice—had all the same classes. And so someone thought it was really funny, because we were always together for this reason, to give us the nickname “Lopii”, because it’s like the plural of Lopez, which is our last name. So everyone would just say “Hey, Lopii!” when we walked by and stuff. So then sophomore year [of high school], Katie—I’ve always written songs, like since I can remember, I’ve always done it—and Katie came up to me sophomore year and said, “We’re doing the talent show, you’re gonna write a song and we’re gonna sing it,”—

KL: That’s how our relationship works.

OL: —and I was like “Are you kidding me? What? I’m not doing that, that’s crazy.” She said, “No, you are, we’re gonna do it.” And we did it, and the day after, all these kids at school were like “You need to release this, this is really good,” so that’s how we started our band.

KL: So then I was like, “Let’s post it on Soundcloud.” And so what happens now is Olivia writes all the songs and the music and I sing harmony and sometimes play guitar to it. We’ve performed on campus, y’know, in that era.

KL: But anyways, we release an album every year that summarizes the experience of the year, sort of.

OL: It was a project that I started going into Wes. I wanted a way to keep a diary of every year but make it so I could go back say, twenty years from now, and say “I wonder how I was feeling freshman year. What happened?” And so far, we’ve done three albums and the fourth one is the last year, but it’s been a really fun project.

A: Do you do this at the end of the year, after you’ve kind of reflected on how you were feeling, or is it something where during the year you work on stuff, make notes, and then it comes together at the end?

OL: That’s a really good question. I think when I start each year, in the back of my mind I’m like “Alright. This is year two, or this is year three,” and then as things happen I’m always writing, like constantly writing. I write sometimes three songs per week, or something. And none of them end up on the final album, like I write up until a couple weeks before it’s released. So I’d say it’s both writing in the moment and even writing lyrics, and getting that emotion down, and then later on, reflecting on it and really mastering the songs so it captures that moment.

OL: Oh my god, what a weekend.

KL: —anyway, so that’s the definition of collaboration. She’s DPing [working as the Director of Photography on] my film. I think we just get each other creatively.

KL: But I think—because we’re so comfortable around each other—I think with that comfort comes creativity, and feeling comfortable around a person to bounce ideas off of because sometimes you know, it can be hard when you don’t know a person, saying like “Oh, I want to do this,” and you’re worried about judgement, or…

OL: And I feel like for me, I’m like the head of the music department and so I’ll craft all these songs and I’ll say like “Katie, harmonize on this,” or that kind of thing, and then with film—or even, writing a play, say, “I have this, can you come collaborate,” so we both have a—

OL: And we just know where the other one fits in as a collaborator.

A: We’re both only children. Is twin telepathy a real thing?

OL: Oh my god, okay. I know we have different answers to this question, cause I say it is, cause when she feels pain I feel it. But I don’t think it’s the same for you.

KL: I feel like it’s more like twin sympathy and twin guilt. When Olivia is hurt, emotionally or physically, I feel bad. I feel guilty for things as well, and I think that’s definitely a thing. I don’t think I’ve been able to read your mind, though. I can tell when Olivia is off though, you know what I mean, I can tell. I know her mannerisms really well.

A: So we talked about music, film, but in general, what’s your favorite Wesleyan memory?

OL: There are too many.

OL: I can think of one very specific one that we probably both have. I mean, there are two. Doing “Bloom” was—

OL: I will always stand by the magical time that I had. It almost didn’t seem real, it was crazy. I don’t even know if I can accurately describe what it was.

KL: I would say just in general being with our friends.

OL: Yeah. And I think just, another thing is playing music. It was so beautiful, we met so many amazing musicians, and just having that experience performing at Wesleyan and even performing “Bloom,” it was so beautiful to share that. I just love how creative this campus is, and seeing other peoples’ art and then contributing your art and this beautiful sort of collaboration that happens, it’s what makes Wesleyan, Wesleyan. It’s just beautiful. So I think “Bloom” and performing.

KL: I mean, I think expanding beyond the creative memories, I just think that being with friends and like, you know… The pre-games, the movie nights, and the late nights. Just living with friends! It’s just, such a blessing.

OL: Especially now, I have to say. Looking back on all the memories, they’ll always mean a lot, but especially now they mean a lot.

OL: We love other people.

KL: That is the best part for me. I mean… we were doing my test shoot two weekends ago, and I didn’t do anything this past weekend and I realized “Oh my gosh, the reason why I had so much fun at the test shoot is because I was around so many amazing people.”

KL: I think in college, I’ve learned that friendship—

OL: Is so important!

KL: Is the most powerful thing!