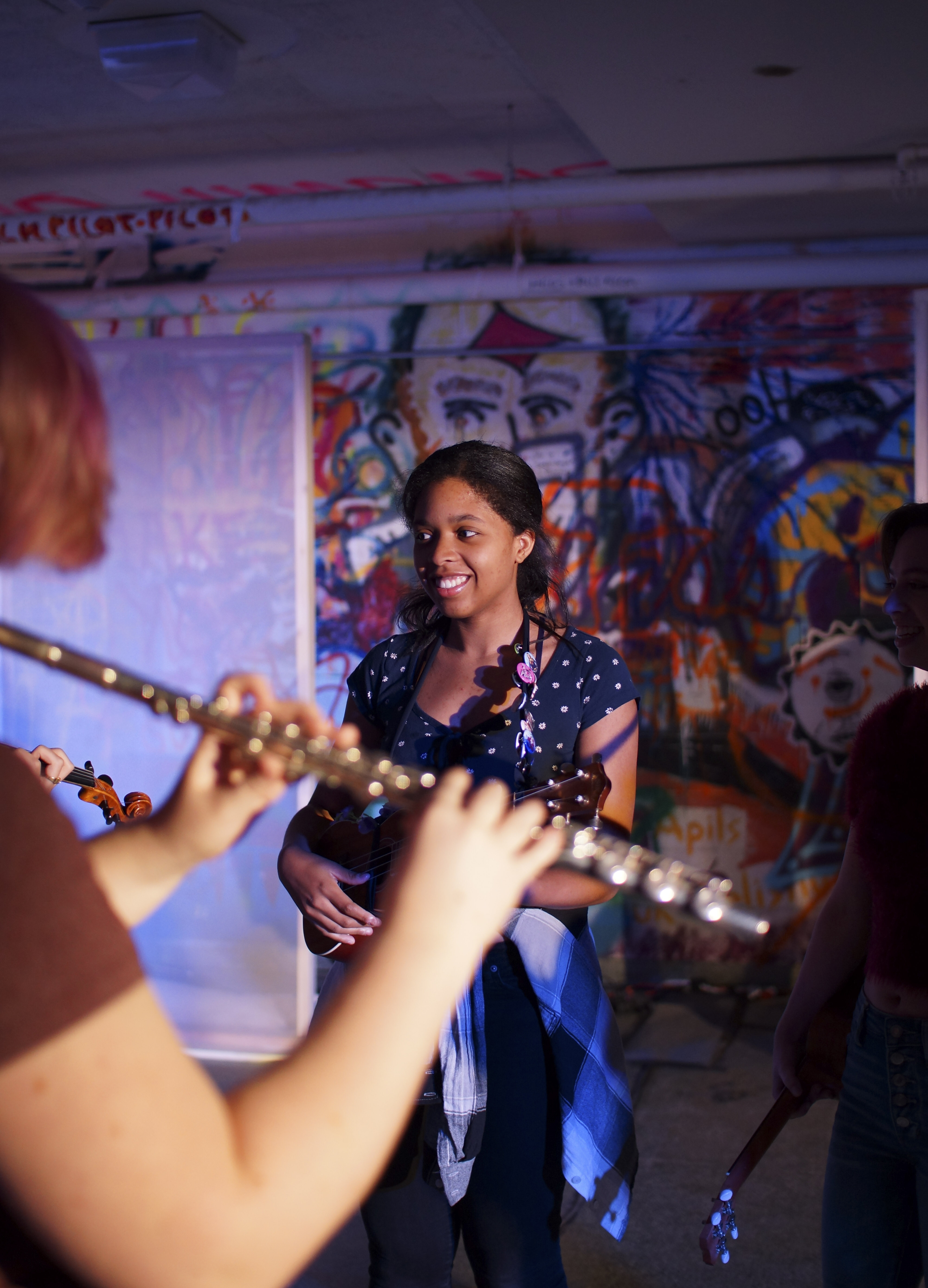 For fans of musicals like “Once” or “La La Land,” “Bloom,” an original musical directed by Nathan Pugh ’21 and written by Katie Lopez ’21 with music by Olivia Lopez ’21, is a worthy addition to a long list of stories about the one that got away.

“Bloom,” which debuted in the WestCo Café last night, follows the lives of two nameless artists—played by Emily Bloomfield ’22 and William Miner ’22—set against the rainy backdrop of Portland, Ore. Bloomfield’s character, a performance artist who secretly yearns to be a songwriter but struggles to build up the confidence to show anyone her work, spends her days standing in the middle of a busy city square dressed as a bride, where she soon catches the attention of an amateur photographer who aspires to work in film. The photographer, played by Miner, is so intrigued by the mysterious and silent bride that he invites her to lunch, kickstarting a not-quite-relationship that affects the two characters both artistically and personally.

“Bloom” is, first and foremost, a story driven by people and not by events, which is a good thing as some aspects of the plot are likely to draw raised eyebrows from the show’s more skeptical viewers.  For instance, how can an aspiring singer be plagued by debilitating stage fright? What would motivate a man who claims to hate listening to music to spend so much time teaching himself to play the ukulele? How are the protagonists surviving Portland’s increasingly expensive rental market by working as a curbside performance artist and a part time waiter? Questions like these, however, are ultimately less important than the relationship between Bloomfield and Miner’s characters which forms the crux of the story.

Since their relationship plays such a crucial role in the story and since they have the only non-ensemble roles in the show, “Bloom” relies on Bloomfield and Miner’s chemistry and charisma, and for the most part, they deliver admirably. Miner plays his good-natured Midwestern transplant with infectious energy, and his ceaseless attempts to bring Bloomfield out of her shell feel genuine when they might easily have seemed condescending. Miner convincingly sells his character as enthusiastic but slightly naïve—the type of guy who might, for instance, repeatedly invite a woman out to lunch without thinking to mention he still has a girlfriend back in Chicago. Bloomfield, playing the more reserved of the pair, has a somewhat challenging role, as it can be difficult to walk the line between subtlety and flatness. Overall, Bloomfield succeeds in portraying a woman who yearns to take emotional and artistic risks but struggles to open up to others, yet there are scenes where her slightly flat delivery and habit of looking downward (instead of at Miner or the audience) make her seem bored instead of hesitant. When Bloomfield sings, however, there is no question about her ability to emote effectively. In fact, the scenes in which Miner films Bloomfield performing her songs are the ones in which the pair’s chemistry is most obviously felt. 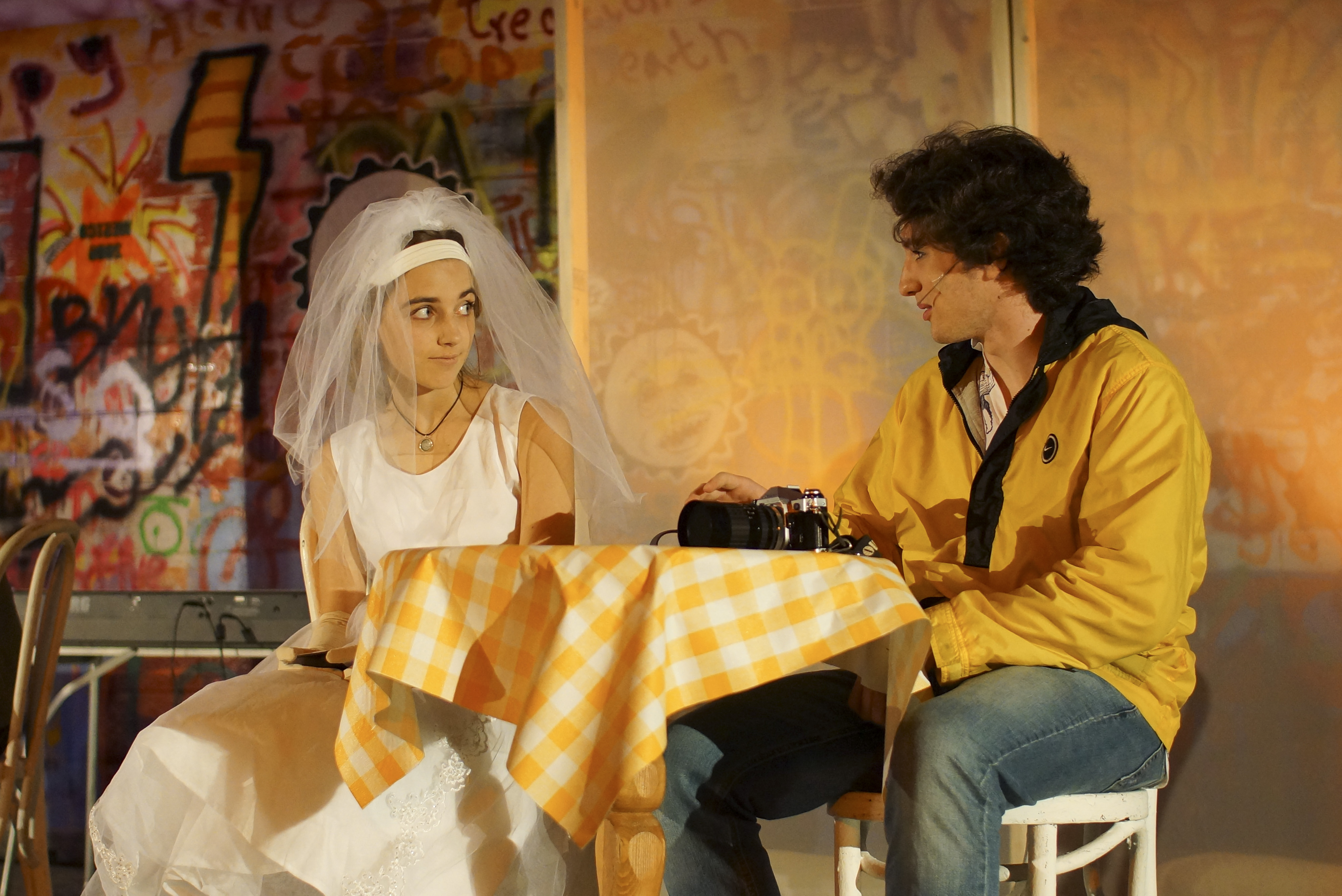 Music is one of the greatest strengths of“Bloom”, and Lopez’s slightly melancholy acoustic pop is perfectly suited to the show’s mood and setting. Several songs in the play are performed by Bloomfield as part of her repertoire, and taken together these songs paint a convincingly consistent portrait of a very specific type of piano-driven indie pop singer-songwriter, in the vein of Ingrid Michaelson or early Regina Spektor. The “Bloom” soundtrack also makes creative use of the show’s ensemble; along with singing, the actors also accompany themselves, playing a variety of instruments onstage. This is a neat way to visually bolster the script’s emphasis on Portland as a city overflowing with struggling artists and street musicians, as well as a smart way to incorporate a variety of instruments into the show’s soundtrack without having a band.

“Bloom” also displays creativity in its set design and use of space. For the most part, the set pieces are fairly minimal: a cluster of chairs and tables to represent a café or a single ivy-covered arch to represent a secluded park. The most interesting part of the set is a trio of sheer white panels along the back wall of the stage. For most of the play, these panels serve only as a backdrop (and to obscure WestCo Café’s graffiti-covered walls), but in certain scenes they are used to display video projections of text conversations between Miner and Bloomfield’s characters, an interesting touch that adds to the sense of realism and intimacy that permeates the show.

There are few intensely dramatic scenes in “Bloom” (save for one climactic confrontation between the protagonists, and even that is more poignant than passionate), and while the play does draw some external tension from the characters’ career struggles, far greater narrative emphasis is placed on the natural progression of two people gradually growing closer together. Audience members in search of a more plot-heavy storyline might find this slower pace frustrating. However, there is plenty of value in this type of naturalistic storytelling, and eventually—once Bloomfield and Miner are finally forced to verbally acknowledge the burgeoning romantic tension between them—plenty of emotional payoff as well.