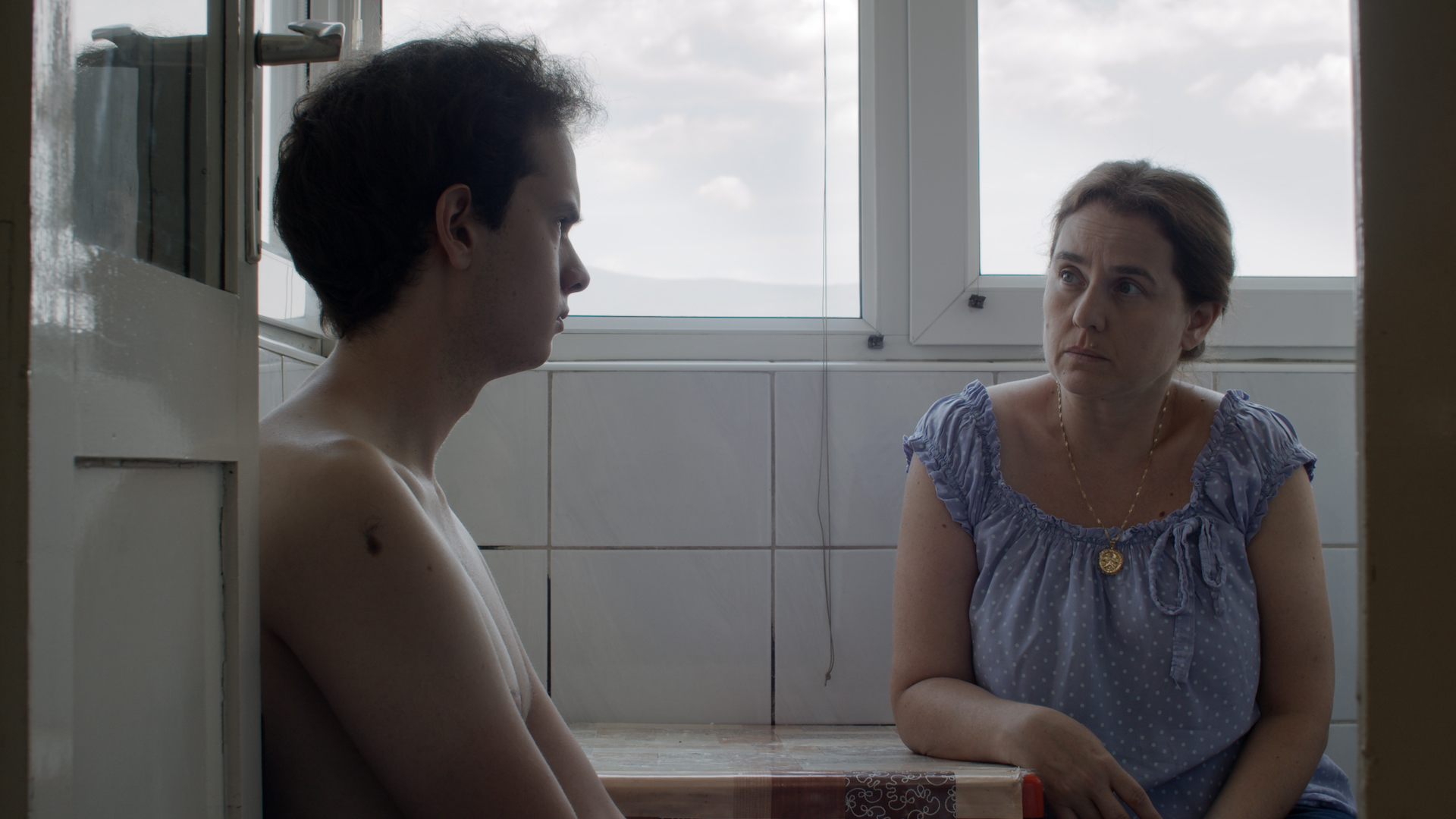 After the catastrophic 1963 earthquake in Skopje, Macedonia, tore buildings down to their foundations, injured and killed thousands, and decimated about 80 percent of the city, entire neighborhoods had to be rebuilt. In the next few decades, dozens of countries rushed to provide funding for Skopje, not only to rebuild the city’s infrastructure, but also to reimagine communal spaces, adding parks with lush, kept grass where children could play and families could congregate. “I’m Calling Your Father,” a 12-minute short film written and directed by Leon Ristov ’21 which had its international premiere at the 26th Sarajevo Film Festival in August, opens in one such park, as the viewer looks down at the protagonist, 16-year-old Damjan, lying nearly unconscious with his nose bloodied, having just been beaten up by other teenage boys in the neighborhood.

Ristov, who is from the Skopje neighborhood in which the film was shot, says that the city’s ideas for reconstructing the apartment buildings were meant to be idyllic, like creating a suburb in the middle of the capital. Yet while the parks, as communal meeting places, were intended to cultivate friendly communities, he remembers that this was not always the case.

“That’s where everyone played as a kid; you’d go behind the building, and that’s where everyone plays and gets hurt, and that’s where all the drama happens,” Ristov said. “They’re so beautiful to me, and my neighborhood is so beautiful to me—I really love that idea of having these…apartment buildings. It’s a very cute scene, it’s very idyllic, and to have this in [the film]—I think it’s a good contrast between what we intended and want to be…and what we are.”

On the surface, the story is a revenge plot, versions of which he had seen people from his neighborhood undergo. After Damjan returns home and presents his injuries to his mother, she decides to call his father, who has a tendency toward violence and can avenge their son. Around this framework, Ristov’s film examines the relationships within the protagonist’s family unit through a complex exploration of gender roles and the family’s past. Setting the film in Skopje, Ristov was interested in themes of development—the development of the city’s infrastructure, as well as the development of a family’s relationship to violence.

“I was trying to make a movie which looked closely at the mother’s decision to call the father,” Ristov said.“That was the most interesting part of the movie for me, because they have this history…but she decides to forego her personal relationship to this violent person in order to save her son from further bullying. She’s using the system of values that oppressed her to get her son ahead, and that was the most interesting thing to me, that decision.”

The most physically violent scenes of the plot, however, are kept behind closed doors or hidden between cuts; the story begins in the aftermath of violence, and in that aftermath it remains. Through investigating how the violence permeating both the protagonist’s family and neighborhood is cyclical, the film brings to light the personal motives behind the characters’ choices, while also looking at the social systems that confine them, such as gender and socioeconomic class.

“They’re comfortable, and…they know the police won’t help them, but they know that if they were to do something, they probably wouldn’t receive any big repercussions,” Ristov said. “I was trying to balance a kind of satire or critical view of where this family is—their social status, what each character is supposed to do based on their gender—while also trying to understand them within that.”

In this sense, the most painful scenes of Ristov’s film do not involve punches, but instead reveal harsh reprimands, the lasting marks of violence on the body, and the understanding of the violence through the eyes of Damjan and his younger sister, two children who are being indoctrinated into the worldview of violence as a solution. For Ristov, the impulse to not show the more physically violent scenes was also an interest in maintaining objectivity, in not aligning his viewer with one family over the other and erasing the nuance of the situation.

“For me, it’s about appropriately placed sentimentality, because I feel that empathy through the film form is necessary to understand why things work the way they work,” Ristov said. “If we just show what happened without ever trying to understand the feelings of every character, we might be confused without knowing how it happened and why it happened. But when you have appropriately placed sentimentality…like in the penultimate scene, with the mother and the father, this is where I allow sentimentality and melancholia to take over. I feel like this pain that exists between them, it is in many ways the reason all of this has happened. On a larger scale, it would be gender norms and macho culture, but in this story, that scene would be the heart of it.”

While he shares some of his thoughts on the film’s conception, Ristov is hesitant to offer a definitive interpretation to his viewers.

When the idea for the short film came late one night in his freshman year, Ristov was enrolled in Introduction to Sociology, a course which he said catalyzed the film’s interest in how gender and class configure relationships. He had heard about the Gordon Career Center’s Wesleyan Summer Grant program and decided he would wait until sophomore year to apply, both so he would have a better chance of securing the grant, which is more frequently awarded to upperclassmen, and so he would be able to revise multiple drafts of his screenplay. With this funding, Ristov flew home to Skopje the summer after his sophomore year to film, paid for minimal production costs, and saved some of the money for festival applications, which meant that little funding was left over for the professionals who became involved with the project. Luckily, Ristov’s producer, director of photography, and actors—professionals who had worked in film for many years—participated because they believed in the script and in the director’s vision.

“It’s a small industry [in Macedonia], and very few movies are made every year, so if you have a good idea, people want to help make it, because we want to have more movies and we want to make more movies. Professional actors are very generous in that way and like to help our student films and younger people,” Ristov said.

After sitting on the footage since the summer, Ristov came back home to Skopje in March of his junior year, when Wesleyan’s campus closed due to COVID-19, and worked on editing the film until he was comfortable submitting to festivals. Though he initially had plans for other applications, everything lined up for the Sarajevo Film Festival, which, attracting over 100,000 people annually to its programming, is the largest film festival in Southeast Europe. This year, due to the pandemic, the films included in the festival were screened on-demand.

“It made perfect sense to apply to Sarajevo as the world premiere, because it was close, it was in the summer, and the deadline was close to when I was done with the movie, and that’s what I did. I didn’t really expect to get in, but I did, and it was really amazing,” Ristov said.

Before the film’s international premiere, Ristov showed the film domestically at a smaller festival in Skopje. The film is set for three more festivals, and Ristov hopes to continue the circuit.

In the aftermath of these achievements, Ristov is grateful for the opportunities he has had and is also reevaluating his conceptualization of success, as he continues in his filmmaking career.

“You want it so bad, and then it happens, and it’s a dream for anyone to have a film there. After it does, you realize that that doesn’t mean that it’s a masterpiece or your best work—and obviously you know that—but when you’re applying, you’re trying to hope for the best…and you get some validation of your work and what you’ve done, and you’re happy,” Ristov said.

While having his film screened at festivals like Sarajevo has exposed more people in and out of the film industry to his work, Ristov remains conscious of the relationship between the praise he has received and his goals for the future.

“Yes, this is a huge success, and I’m very grateful and happy, and I’m trying to get it into more festivals,” Ristov said. “And I’m trying to remember that this form of success—getting into festivals, external validation—should be a byproduct and not the goal.”