In light of these cancellations, Second Stage is currently in the process of returning their budget to the Wesleyan Student Assembly (WSA), contacting rights companies to cancel contracts, deciding how to handle leadership training, and figuring out how to support creative work from afar.

“We have hundreds of people every single semester putting in so much work and wanting to participate, so we are so devastated,” Second Stage Managing Liaison Pryor Krugman ’20 said. “It’s not really even for ourselves, just for everyone who was excited about or working on a show that can’t get to do it.”

Second Stage staff met virtually on Monday, March 31 to discuss how to move forward this semester and how to review shows applying for next semester.

“I think for me [the cancellations are] just motivating me to get more involved in the coming semesters because I want to feel like I’ve made up for this loss of creative time in some way, and I’m excited for it,” Second Stage Staff Member Sam Feuer ’23 said.

All five of the cancelled productions had complete teams and casts, and all were already weeks—if not months—into the rehearsal process.

“Nine” was directed by Keith Jones ’22. Written by Maury Yeston, the musical is based on the life of Italian film director Guido Contini (a character based on Frederico Felini) and follows his life through Catholic school education and romantic advances. The 40 members of the cast, crew, and orchestra pit had been working and rehearsing since the start of the semester. 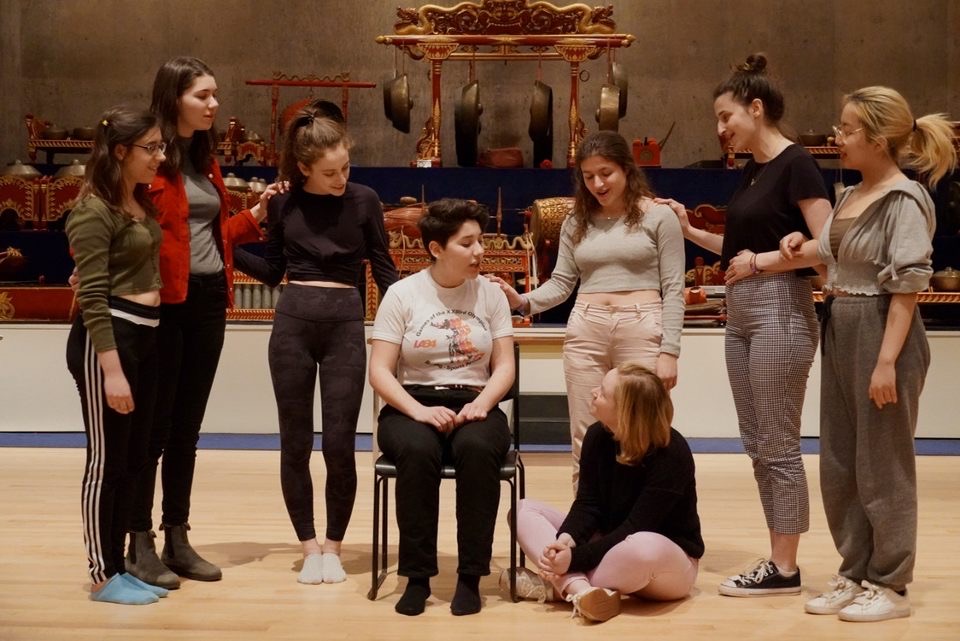 Students at a rehearsal for “Nine”, a relic from a time before social distancing.

“The team was an absolute dream,” Jones wrote in an email to The Argus. “I couldn’t have asked for a better group of people to work with, everyone believed in what I put forth which is a very gratifying feeling and I was able to work with everything I was given by my peers which again, is just a sublime feeling to really feel like this is a project made by a loving group of people.”

The production was just one week of rehearsal away from its scheduled performance dates, March 26–28 in WestCo Cafe.

“It was just frustrating that we’d put all this work into the show and that it had gone entirely to waste, but I feel like we kind of reconciled that a little bit with this idea that the process while not particularly rewarding—in the way that you didn’t get that release of being able to do three shows in the end and have everyone get to see the piece of art you made—people got a lot from the process of this show and had a lot of fun together,” Feuer, who co-music directed “Nine,” said.

“Time Again,” a musical written by Percy Langston (a current student at the University of Maryland) with music and lyrics by Payton Millet ’21, was directed by Elizabeth Nefferdorf ’22. The show was slated to go up April 2–4 in the Patricelli ’92 Theater. The show is a semi-autobiographical musical that follows main character James, a 25-year-old grad student who is transgender and returning home for the first time after seven years of absence.

“The intent behind the title ‘Time Again,’ is basically about how people choose not to interrogate inconvenient truths about people in their lives or about themselves,” Millet said.

Millet and Nefferdorf are hopeful that “Time Again” will be produced by Second Stage in a future semester.

“Our rehearsal process had been going extremely well,” Nefferdorf said. “Everybody in the cast was very passionate about the show and we really assembled a group of extremely talented individuals who were willing to put their whole hearts into the process and trust a very new show and a very undetermined show.”

Shades, the University’s student of color theater collective, was sponsoring an art piece that was set to be performed in the ’92 Theater on April 9–11. Isabel Algrant ’21 and Naomi Okada ’20, who are both members of the Shades board, coordinated the project. The showcase was set to include dance groups, a cappella groups, and other groups, including the Caribbean Student Collective, POC-capella, and possibly Xtasy and the Womxn of Color Collective (WoCoCo).

“The goal of the showcase is to bring together a lot of artists of color who might not consider themselves artists to come and basically perform and have time in the’ 92, to sort of showcase the work that they do,” Algrant said. “Shades exists as a reaction to the predominantly white theater that exists on campus, and so we wanted to give an opportunity for a more all inclusive piece of theater, specifically targeted toward people of color.”

“Equus,” directed by Noah Seltzer ’20, had performances scheduled from April 16–18 in the ’92. The cast and crew of “Equus”included multiple first time actors and designers, and there were plans to incorporate original music by Max Murgio ’23. The show is about a psychiatrist and his patient and explores themes of religion and portrayals of mental health.

“Obviously it’s really sad, it’s hard when you’ve put a lot of effort into a show and seeing other people put a lot of effort to not see it come to fruition…, but I also think it was just a good experience in general getting to be in rehearsals and learn how to do different things and just getting to meet those people,” “Equus” Assistant Stage Manager and “Nine” Dramaturg Sarah Shapiro ’23 said. “I think that there is still something you can get out of the experience regardless of whether it actually ends up going up, even though it is sad that no one will really ever get to see the finished product.”

Directed by Annabel Asher ’22, “Heathers” was Second Stage’s last production of the semester, scheduled to go up in the ’92 on April 23–25. The team originally applied to put on “Fun Home” but were ultimately not able to get the rights. Instead, they decided to put up “Heathers,” continuing the process with many members of the original team. Heathers is a musical, based on the movie of the same name, about the seniors at Westerburg High School and addresses the subjects of teen mental health and suicide.

Before the semester was cut short, the cast and team were beginning to explore new layers of “Heathers,” involving homophobia and queerness.

“I think what was special about my cast and crew was how resilient they were, especially the people who stayed for the switch, that is so beautiful to me,” Asher said. “That loyalty and willingness to make art was really special because I’m learning just as much if not more than everybody who was part of this.”

I must admit, I was playing Little Guido, Guido Contini’s nine-year-old self, in “Nine” along with 40 unbelievably talented cast mates, crew members, and instrumentalists. This was my first time as a cast member of a Second Stage show, and when I found out that we wouldn’t be performing, I was devastated. My score, which needs to be returned to the rights company, is still sitting open by my bed after weeks of knowing about the cancellation (I promise I will mail it this week!), and I don’t know that I will ever get some of the harmonies out of my head. However, being a part of this show brought me new friendships, amazing memories from late night rehearsals and afternoons in music practice rooms, the confusion that comes from being one of two cast members with the same name, the realization that I can do a single pirouette even though I maintain that I cannot dance, and the fact that the walls in the Butterfields are very thin (so if you sing in a room on the second floor you will be heard and embarrassed by your director on the third floor for practicing outside of rehearsal). Despite the disappointment of not seeing opening night, I would not have traded this experience for the world. I am so incredibly grateful to Second Stage and the team of “Nine” for this opportunity, and I cannot wait for next semester.

Hallie Sternberg can be reached hsternberg@wesleyan.edu.